If you have used non-HP ink in your HP printer, we want to hear from you in the comments below. On the topic of inks, some printers (Epsom are notorious) squirt a lot of ink in some kind of jet cleaning process every time the printer is turned on. Since if we keep our printer on and just print a small test page once a week we use MUCH less ink than the turning on process, I would question the necessity of the automatic head cleaning and ‘wonder’ if it wasn’t to sell even more EXTREMELY expensive ink cartridges with a tiny amount of ink and a huge amount of plastic.

Really pleased you are onto this.

Hi, Patrick from Which? here (UK’s consumers’ association). @kimwils Printers can be very wasteful in-between prints. Indeed, it’s usually cheaper to do continuous printing, than to print on and off. If you turn off your printer in-between prints, you can save some dosh, but even when turning the printer back on after a long time, it will clean the print heads with ink. Some printers are much worse at being wasteful than others.

Another thing that grinds my gears is that often the printer asks you to change your cartridges when there’s still a fair bit of ink in them - I expect it’s to keep the quality of the prints high, but still.

It’s good Choice is looking into what HP is up to with third-party inks as it’s perfectly reasonable that you should be able to use cheaper cartridges.

For your information @BrendanMays, HP laser printers don’t block third party toner (yet), but they do bring up a pop-up box every single time you print: 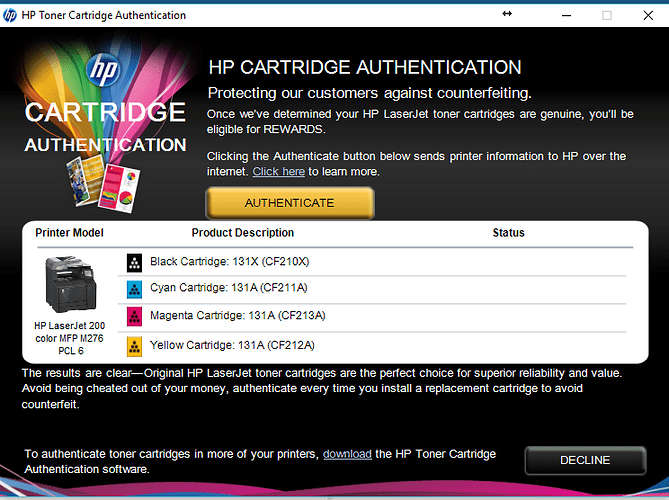 There is no obvious way to prevent it from appearing.

If you have a Canon printer, then you may be interested in Rihac Pop Carts.

Pop Carts are currently available for Canon brand printers that use all-in-one cartridges including ultra-cheap printers such as the Canon MP230 multifunction unit, which costs less than $40 to buy at Officeworks. The Canon ink cartridges (CL-511 and PG-510) cost $37.95 and $26 respectively from the same store ($63.95 total), whereas the Pop Cart replacements (MP480 Pop Carts Set) from Rihac cost $32 total (at time of writing), or half the cost. rihac.com.au

Interesting, thanks for the info @meltam.

I bought an HP multifunction over a year ago and now that it is out of warranty I inquired about a Continuous Ink Supply System only to be informed that because HP is continuously upgrading the driver for the printer in such a way as to cause CISS systems and third party cartridges to not work the manufacturers of such devices have stopped making them as they were being left with unsaleable stock thus leaving me with the only option of buying original cartridges at a much greater price. Is this a breach of Fair Trade laws?

I twice non HP ink cartridges (different ones) and the printer started to play up and the quality was not as good as with the HP ink cartridges. Use for just internal and not so important documents the Draft settings and black&white if possible. Saves a lot of ink…

I have used various non HP ink cartridges in my 3 year old HP-Photosmart-B110 printer. They have all worked just as well as the genuine cartridge. I do get a nag screen that tells me that I am using non genuine cartridges but all I have to do is press “OK” and it then prints.

That inconvenience is a small price to pay for the large savings on ink.

I had an HP printer and it was extremely difficult to get it to accept non HP cartridges even though I could buy a full set for less than the price of one HP cartridge
I finished up changing to an Epson and have no trouble using “no name” cartridges. Incidentally a full set for an Epson XP 520 from Hong Kong is just $14.00 including postage. On my third set and no problems at all!

Thanks Choice for raising this one !

The business model for all printer manufacturers is to get you to buy their printer at very slim or no profit margins and then harvest a premium profit on their ink.

TRADE PRACTICES ACT
I haven’t researched it yet, but I’ll bet the Trade Practices Act comes down hard on any printer manufacturer who designs and sells a product that will NOT work with other brands of ink That is UNLESS they clearly disclose this at the time of purchase e.g. a big red warning sign stuck on their web site,the box and on the printer… The sections that may apply are the ones dealing with misleading behavior or restrictions of fair trade.

MAYBE THERE IS A BUSINESS OPPORTUNITY HERE
It’s hard to understand why a printer manufacturer hasn’t packaged up “Buy our printer and we’ll sell you discounted ink for 3 or 5 years after you buy our printer.”, similar to fixed price servicing offered by car manufacturers.
Might contact some big printer producers and see if if I get a bite - I’ll bet not…

In my last printer I bought the cheaper ink. The printer was an HP. The ink messed up the printer to the extent it could not work anymore and I HAD to buy a new one. I now have a new HP which I tried not to buy same brand but got it on special so did go for HP. Again I have the same issue as I must use HP. And yes the cartridges cost a fortune. I just bought a 4 pack.ONE black cartridge and 3 COLOUR for extra printing is $112 in office works. $112 for just 4 cartridges. What a rip off. Yes choice you need to do something about this and yes you can’t use other cartidges in there because if you do it will mess up the printer and you will have to buy a new one.

Hi @Choosegood, how did the non-genuine ink cartridges affect your printer?

I posted this in a relevant shopping thread, and it is appropriate here, noting HP has often been more aggressive than others.

For everyone who uses compatible ink carts, unless you have a functional problem with your printer do not accept and install the firmware updates. Many if not most firmware updates are meant to stop / disable the printer’s recognition of compatible cartridges. For the non-technical, firmware is essentially the printer’s brains and does not include the PC resident printing application or Windows/Mac drivers that are classed as software.

So far every time a manufacturer releases a new firmware that does that, the compatible manufacturers shortly release a new chip that works. A worry are that you could buy some compatibles off the shelf with an older chip that might not be recognised. Some of the high volume compatible vendors are very clear about that, and virtually all of them provide a money back guarantee for a few weeks in case their carts are not recognised by your printer. That is the prime reason not to stock up too early. You want to install your new cart well inside that satisfaction period to assure it is accepted by the printer.

Another wrinkle is that if compatibles are installed and you do an “offending” firmware update, your printer might no longer recognise them so off to the shop for you, and you might have to buy OEM to get by in the immediate term.

I checked price of ink before purchasing years back. Cant go past Epson. Price of their inks are very low in comparison and haven’t had any problems whatsoever. Don’t do head cleaning much, once in 5 years on last printer. Inks lasts well and yes it does have an ink monitor but can just not install it. Printers last well too.

@houzer I too have an Epson Inkjetprinter am an more than happy with it . I like the fact that you can adjust the time when it checks for updates , which only scan your chipped carts to see they are OEM . My favourite setting is " NEVER "

@ natural.thought . the ink went gluggy and also spread all over the arm that moves across. it started to leave blotches on the paper. not at first. after a while. maybe half way into the cartridge. this was by the second or third cartridge. not straight away. then the paper started to jam. i tried to clean the mess it made but it wasn’t really cleanable. i persevered but in the end it just jammed up with glug and stopped printing. i am pretty sure it was the cartridges though not the printer because it was only after i changed to the cheaper cartridges.

I only use original cartridges as I have my own business and can write them off for tax . Some generic brands seem to be better than others . It is a hard way to trial and error them when they nearly wreck your printer to find out which is the best generic . Often dearer ends up being cheaper in the long run .

HP makes an insane amount of money from printer consumables - ink, toner, fusers, etc - to the point that particularly at the lower end of the market, home, small business, the printer is simply a conduit for selling consumables. Over the life of the average couple-hundred-dollar printer, you’ll spend way more in consumables.
It’s a little ironic that HP Inc (InK) is the part of the split HP that does printers - and where they make the biggest single chunk of cash.
Saw this article recently on BBC - “Large numbers of HP printer owners found their printers stopped recognising unofficial printer ink cartridges on 13 September.”
BBC Article on HP Cartridges …
HP aren’t the only rapscallions doing this … they all use printers to sell ink …