Today, we launched our ‘super complaint’ into the airline industry.

We found the airlines systematically breaching the Australian Consumer Law from unfair terms and conditions to ‘no refund’ claims made during the booking process.

We’re calling on the airlines to improve their practices and start giving consumers the rights they’re entitled to under the law.

You can read the full report at choice.com.au/fareplay or help us out by sharing our Facebook post. 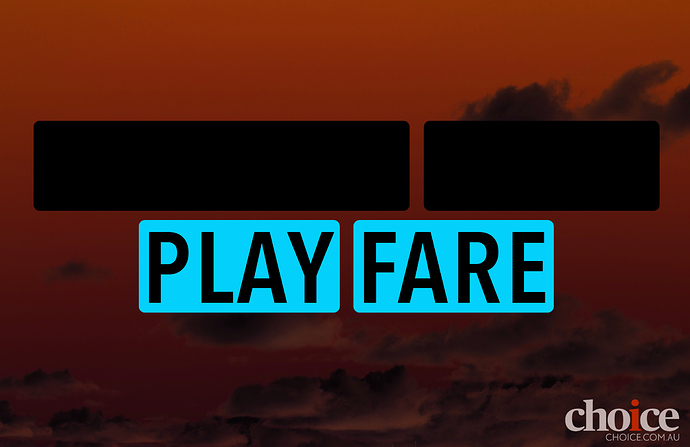 In my opinion airlines and Internet Service Providers work on the same business principle - the fine print of each guarantees you nothing. So they’re really just gambling companies. You place a bet; and with one you may win a flight to where you want to go on the day and time that you want, with the other you may win a working Internet connection; or sometimes you lose.

And there’s always someone who just doesn’t get it. Angela Mollard has reported this via news.com.au here.

She just doesn’t understand or hasn’t actually bothered reading the super complaint. She thinks it’s perfectly fine for there to be a no refund policy on cheaper tickets and doesn’t seem to be able to fathom that it’s actually against the law in Australia for them to say that there are no refunds.

The travel agent stuffed up our US trip, had us going back to San Diego from Los Angeles, to catch a plane to fly us BACK to Los Angeles !..said it would cost $1400 to change. We had to book an extra day in Las Vegas so it would only cost us $800 …said it was the Airlines who wouldn’t refund. This was a month ago. Our trip isn’t until July 2017…still angry about it.

I was looking last night to book my domestic fights in India in Feb/March. It was great to see that all flights and airlines I was looking at were noted "refundable’.
If travel agents don’t get it right, their client should not have to pay for their mistakes.

I booked a flight to NZ in January 2017 with Emirates, to use up our “12,800 miles” worth of points, whatever that amounts to. My wife and I had accumulated the same amount of “miles”. I had to call up the Emirates operator, as I was unable to use my points by logging into the website as a member, as there was no facility to enter “earned miles”. I booked the return flight for the 2 of us in October this year. The operator said she would give a seat allocation at the same time. When she read them out to me, we were in 2 different rows and not sitting together. I told that that it was unacceptable & why did she do that. She replied that if we wanted to sit together, and why wouldn’t we, since we are married & travelling together, we would have to pay an additional $40 per person for the return trip. I pointed out that we are both “Blue Miles” members, and as such, can make seat changes without any cost, at any time 7 days before the flight departs. The $40 each was not negotiable & we had to pay it, despite my protesting.
The next day after the booking was made, we had to change the dates to one week later, for reasons beyond our control. We had to pay another $230 each for the booking change. When I told the operator to cancel the whole booking & I’d go with Qantas, she replied that the refund would only be the taxes. We had no choice but to have to go with the booking.
Even with the “miles points” discount, and the penalty payments for flight changes, we would have been better off going with Qantas in the first place, and saved a lot of money. We have been completely dudded by Emirates, for whom we used to have some respect. But not anymore.
I have learned a lesson the hard way and won’t be travelling with Emirates again.

July 2016 QANTAS informed me that their carrier China Airways had cancelled their flight from Brisbane to Taiwan on the 17th Dec 2016 and that I would have to find an alternative date, which I did to the 16th ( this caused me considerable inconvenience as my Taiwan hotel was booked out and I had to book another)

I contacted China Airways who informed me that they do fly to Taiwan on the !7th of Dec but from Sydney

I contacted QANTAS and asked why I was not offered this service which they promptly did. So now I fly from Brisbane on my required date via Sydney.
A charge of $550 was levied.

After waiting on the phone for many hours and talking to call centers in Hong Kong, New Zealand and Hobart I finally got an apology a $550 refund and a Qantas club pass

I still believe the $750 charge was to excessive as China Airways had not been informed of my booking at the time.

P.S.
I have since found out it would have been cheaper for me to have bought my tickets from China Airways

Just dredging up this thread from last year.

We’re currently booked to have a family holiday in Sydney soon and we chose to fly Jetstar, simply because with 6 of us, we can’t afford non-budget seats both ways.

So we booked our tickets, paid the extra for our seats to sit in (on top of the price of the initial tickets), made sure we booked our luggage allowance in advance, etc, etc. Basically we have everything covered and paid for that we need with these flights.

So yesterday and today I received almost identical emails from Jetstar which looked like this: 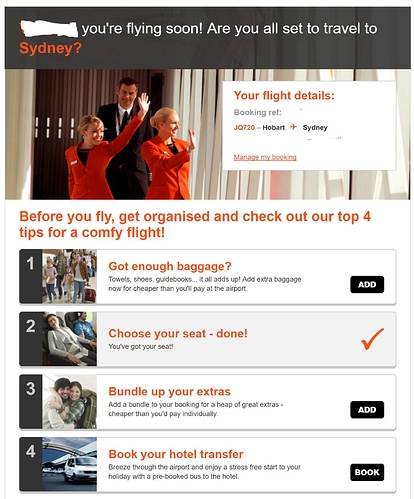 Capture.JPG1427×1721 227 KB
They’ve managed to untick a few boxes on their reminder which makes it look like I’ve not actually got my luggage allowance paid for.

Just double checked my flights and the luggage has actually been upgraded and paid for at the time we made our initial purchase.

A few weeks ago we had an email which also had the Choose your Seat box unticked, even though we’d already paid the extra for the things. I think the only reason it’s ticked this time is because the Mrs decided that the seats I’d picked weren’t the best for us, so I changed them online, which surprisingly didn’t cost me any extra.

It would be nice if they’d actually tick boxes where they’re meant to be ticked instead of making customers think that something’s gone wrong and they have to book the extras again (although the seat option isn’t an extra. Even if you let the airline pick the seat for you, you still get charged a small fee for the privilege of actually having a seat to sit on once you’ve chosen which flights you want.)

Thanks for sharing this @NubglummerySnr, I’m sure @TillySouth will find it of interest.

Is it any wonder that many of us find this process confusing!

I know choice has been big on ‘delayed/cancelled’ flights and transparency around fees, but now it’s time to take the advocacy to the next level.

How about doing similar analysis (see article below) on our domestic airlines: 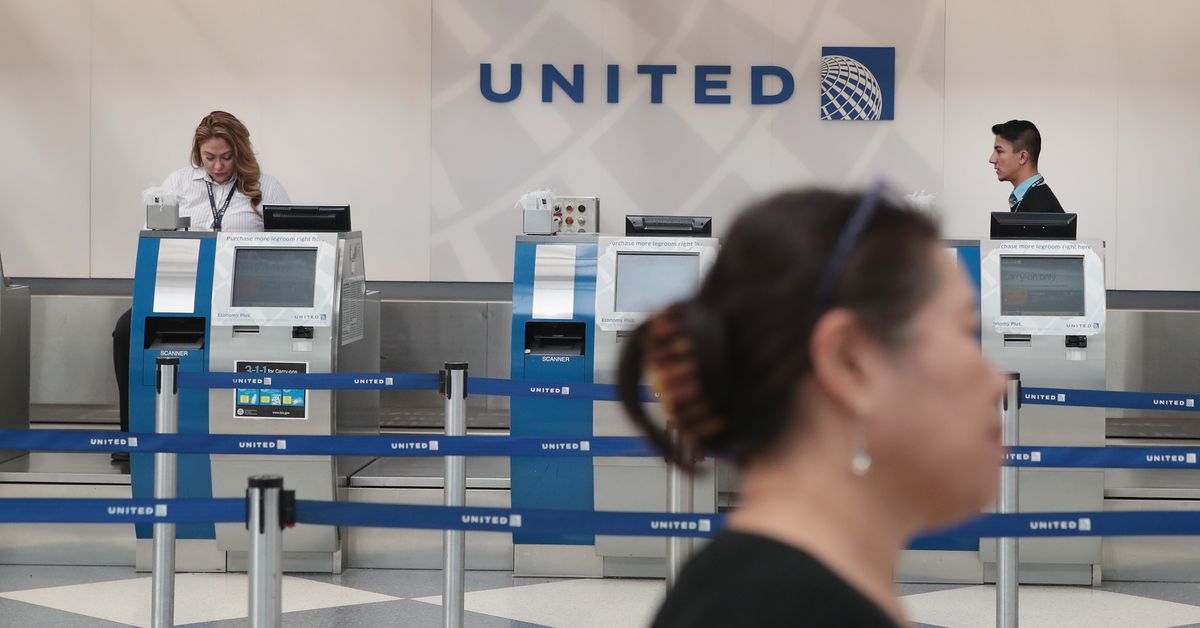 "Calculated misery": how airlines profit from your miserable flying experience

Interesting read @lynn, I’ll be sure to share this with my colleagues working in this area.

Almost 2 years later… @JodiBird, any update on where the Choice super complaint has gone (or not gone)? 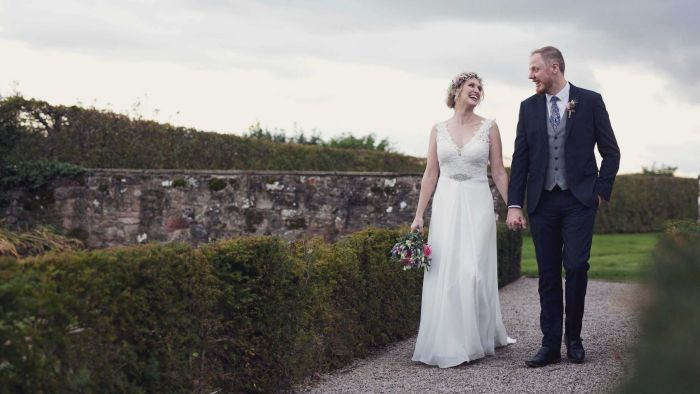 Ricky was heading to his wedding, but that didn't stop him getting bumped...

Between delays, cancellations, overbooking and maintenance, a booking isn't necessarily a guarantee. So, what can you do to best secure your seat?

The ACCC announced proceedings in the Federal Court late last year against Jetstar “for making false or misleading representations about consumer guarantee rights under the Australian Consumer Law”.

“No matter how cheap the fares are, airlines cannot make blanket statements to consumers that flights are non-refundable,” ACCC Chair Rod Sims said.

This was one of the main call outs in our super complaint. It’s our experience that these things can take quite a while for the ACCC to get through but it looks like they’re on the right track.

Jetstar in court for misleading claims on refunds

The ACCC has instituted proceedings against Jetstar Airways Pty Ltd (Jetstar) for making false or misleading representations about consumer guarantee rights under the Australian Consumer Law (ACL). Jetstar has admitted that it made representations on...

The amount sought under this Court process, like most have seemed to be lately, is inadequate as a deterrent to stop/reduce further breaches. The “$1.95 million penalty, and to make a contribution to the ACCC’s costs” I think should be a more substantial fine and not just a contribution to costs but the entire cost that the ACCC has had to outlay.

Rather than start a new thread it seems there is at least some suspicion that Qantas is gaming flights between MEL-SYD and cancelling some to consolidate pax on other flights to save operating dollars and hence increase profits.

The media reply rings a bit hollow given the evidence about the competitor as well as other routes from the two cities.

I expect it would be hard to impossible to prove if they are doing this, but it seems selling tickets for a flight they have somewhere between discretionary to little intention of operating is somewhere beyond dodgy and should be illegal.

least some suspicion that Qantas is gaming flights between MEL-SYD and cancelling some to consolidate pax on other flights to save operating dollars and hence increase profits.

I thought this, along with weather, employee issues and mechanical problems (those lights which light up int he cockpit) are the main reasons for flight cancellations.

Qantas Conditions of Carriage indicate that they can cancel for things within their control and outside their control.Jetstar, Virgin and Tiger Air have similar provisions.

The cancelling of a flight for maximising patronage would fall into within their control.

I also recall one of the airlines publicly indicated a few years ago that some flights are cancelled (passengers rescheduled) due to low passenger numbers and where another flight occurred within a reasonable time.

Airlines are companies and while they deliver a public service is some respects, they are not a public service per say…but private companies. I expect that if government changed the rules to restrict the reasons for cancellations (or even at an extreme renationalised the airlines(), the airlines would increase airfares across the board so those non-performing routes/flights can be subsidised by all passengers…to maintain their profitability.

I also had a cancellation experience back in the 1990s when Qantas (Sunstate) and Ansett would shift passengers from one carrier to another to maximise patronage. I experienced this at Rockhampton airport where my flight was cancelled on arrival at the airport and I was transferred to the competitors flight which departed shortly there after. Maybe it was some form of collusion but it made sense to keep customer happy. I haven’t seen this done since though.

After or with price, the top reason most of us buy a particular ticket is schedule. Book an earlier flight to get to your meeting just in case? How many earlier flights does that need to be then? Or instead of enjoying your holiday hotel from 3PM you are getting in at 8PM so no time for the pool or spa. Too bad for you, QF profits are most important you know.

Life should not be just and all about business profits. In some countries it seems to be.