I received an email offer from Hoselink whereby I could ‘Pay later’ using ZipPay. I had never heard of ZipPay so I looked up their terms and conditions. They have a ‘Pay No Interest Ever’ policy. You pay a minimum of $40 a month but here’s the cruncher 'A $5 monthly account service fee is added to your account for any month you have an outstanding balance." So if you buy $200 worth and pay it off at $40 a month you end up paying 5 x $40 plus $25 service fee. Looks a bit like interest to me. Tell me, in consumer law, is a ‘service fee’ really interest or can they charge whatever they like?

Without commenting on the law or ZipPay in particular, high fees/charges are a familiar story with digital wallets. Another big consideration is the buyer protection offered, such as ‘chargeback’ rights offered with credit cards. Being able to perform a chargeback is much easier than arguing with an overseas merchant if you ever have an issue.

On the plus side, digital wallets can allow you to side-step some surcharges, and in some cases make for an easier or more cost-effective option. Personally, I tend to pick and choose methods depending on the situation. I’m hoping some others in the community can add their experiences here too.

I have a GE Creditline Card, which is similar. I use it to purchase big ticket items from Harvey Norman, Domayne etc and take advantage of long term interest free payment offers without choking my credit card. Even though the period is interest free they put a $4.95 monthly account services fee, so I still tend to try and pay them off ASAP.

They used to send me paper statements and each one would cost 50c (from memory) charged to the account. When I logged on to check my statement recently I see that they are now also charging 95c for an online payment handling fee. I’m not sure if this is to handle my Bpay payment, or for me to access my account online instead of a paper statement, but I think it’s pretty rude and would really like to know if it’s legit to be able to charge it.

Today I received an email from The Good Guys, touting a 24 month Interest Free promotion. The fine print however looks like this: 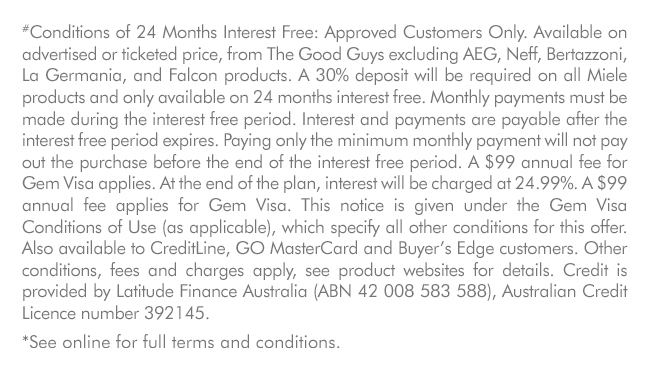 So in order to get your 24 months interest free you have to first sign on for a high interest credit card with a $99 annual fee. It’s basically just a scam to get people to sign up for something they could do better with if they shopped around. The Gem Visa card on offer charges 24.99% in interest for anything that isn’t shielded by the 24 month interest free offer, whereas my Commonwealth Bank Low Interest Master Card charges 13.24%. The $99 annual fee is also high compared to the $59 annual fee that the bank charges for my card. Yes, you get 24 months interest free on your purchase if it’s worth at least $1000 from the Good Guys, but I’ve never needed 24 months to pay the balance off on my card, so the savings in interest vs the higher fee and higher interest rate for any other card purchases you might make doesn’t sound like such a good deal for me.

I don’t see why they can be allowed to advertise a sale as having a 24 months Interest free component when it’s only available to people who sign up for a new high interest, high annual fee credit card from a specific company. For the rest of us, we don’t get the Interest Free deal and I really don’t want to have two credit cards.

Many online retailers (eg Harvey Norman) are offering interest free purchasing. The problem with these is that there may be an establishment fee and also a monthly account servicing fee. For instance, a purchase of a tablet for, say, $1500 over 36 months would require a repayment of $42 per month plus a $5.95 per month service fee. Altogether you would end up paying $1739.20 (assuming a $25 establishment fee). This means $239.20 interest or 15.9%. Even on a per year basis it would be 5.3%.
Any way you look at it this is not interest free and as such the advertising is misleading.

Any way you look at it this is not interest free and as such the advertising is misleading.

I believe that the statement that it is interest free is correct, and as long as the other charges are clearly listed, there is not a problem.

If they were to make it appear that there were no costs or charges when there actually were, then that would be very misleading.

I also believe that many interest free deals rely on the buyers not paying the purchases in full by the end of the agreed period thus resulting in lucrative penalties.

I also believe that many interest free deals rely on the buyers not paying the purchases in full by the end of the agreed period thus resulting in lucrative penalties.

There is also the question of the price in the first place. If you go for one of these deals you will lose most of your bargaining power and have to pay list price or close to it which could be another 10-15%. I have started negotiations having done my homework beforehand but the salesman mistakenly though I wanted the time payment deal, when his price was not competitive I was going to walk . He shrugged and said he could do better for cash, I said yes it’s cash and the price dropped considerably.

My concern is that usually those considering taking these deals are people who can least afford them. Very often these people are not well informed about such hidden costs and about the retailers’ use of euphemistic and misleading statements. In my book cash is always preferable and service charges, establishment fees and any other charges by any other names are equivalent of interest. You still end up paying more for the product. It is also very true that you lose bargaining power. Having been involved in education for many years, I can confirm that not nearly enough is done to make young people aware of these issues.
I still believe that when a retailer splashes in big letters 60 months interest free or 1000 days interest free but then puts the extra charges in small letters or worse in a separate page which needs to be clicked on to read, this is misleading advertising.

Wouldn’t it be nice if it was mandated to publish the ‘cost of money’ as an annual interest rate equivalent that encompassed interest, account fees, monthly fees, and all the other made up fees in aggregate. The Americans do it by requiring the ‘annual percentage rate’ to be shown for borrowing and investments.

In contrast we have the freedom to make interest, account fees, payment fees, monthly fees, exit fees, and establishment fees completely transparent by breaking them out, in small print or smaller print as suits the business. Then we have the ‘comparison rates’ for what is essentially not our loan that is not on the same terms as our loan, but is rigorously defended as being useful to compare by.

Wouldn’t it be nice if it was mandated to publish the ‘cost of money’ as an annual interest rate equivalent that encompassed interest, account fees, monthly fees, and all the other made up fees in aggregate.

I agree with your general direction but prefer to do it slightly differently. Many people have no real grasp of the consequences of compound interest so I want to show them a dollar figure instead. This ought to apply to any kind of time payment scheme regardless of nominal interest, accessory fees or any other complication. The prospective buyer should be given the total repayment at the end of the deal, assuming all payments are made on time and (in the case of real estate) interest remains the same.

On variable interest contracts the current interest and several increments should be shown. So if the property costs 1M$ and interest stays at i% you repay 1.35M$ but if it rises to j% you will repay 1.78M$

I know this idea doesn’t take into account the time value of money but do you want to explain that to people who don’t follow compound interest too well?

prefer to do it slightly differently.

It does not have to be either or, both works and for example credit card statements come close by showing the difference in time and interest paid between a minimum payment and ‘a higher than minimum payment’. I don’t know how that ‘higher’ amount is determined for the examples, but. Once can pay the $2,238.23 and be done with it, or

I generally don’t pay much attention to that section, but it’s hilarious! 52 years to pay the balance, and almost the price of a small car in interest?

I find the standard text of ‘saving’ humorous in context.

Although for some it is not always so obvious, unfortunately.

The last of the three is certainly ‘humorous” more so if you are male and aged 50 or older? Something for the kids and your estate to stress over.

If change is needed, should the minimum payment required by law be not less than the amount required to pay a CC debt of in 2 years?

And for an interest free deal, the total cost divided by the repayment period?

Why make it complicated when many cannot visualise the maths or wallet leakage.

I find the standard text of ‘saving’ humorous in context.

I have posted about this under other topics and suggested that action needs to be taken to increase the minimum monthly amount to a realistic figure so as to help consumers to avoid these debt traps.

An article regarding how Australian consumers are getting trapped by credit card debt. We always pay our cards in full every month but unfortunately, a great many others do not, I paid my CBA MasterCard last week.It was just under $2,370 and the advice on the statement was that if only the minimum payment of $47.00 was made, it would take some 36 years & 11 months to pay off and incur interest charges of $11,696.38 but if $122.12 was paid, it would take only 2 years to pay off, incurring int…

An article regarding proposals to ban buying lotto tickets with credit cards. What a disgrace that there is still no action to raise the minimum monthly payments on credit card bills. We paid our CBA MasterCard bill yesterday in full, as usual, for some $5,300 and noted that the statement advised that paying some $273 a month would pay the accont off in 2 years and accrue some $1,250 in interest, but paying the minimum amount of $106 would take over 68 years and incur over $35,000 in interes…

Why make it complicated when many cannot visualise the maths or wallet leakage.

There is probably an app for visualising that. I shudder to think about the graphical images.