I bought this product to try it. 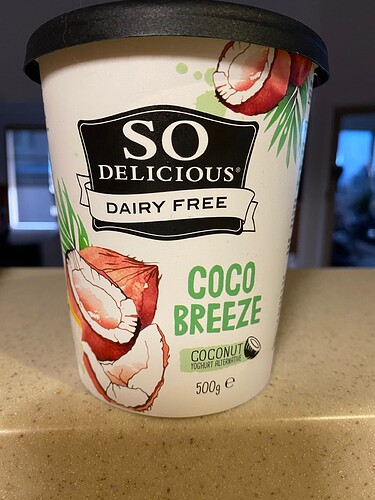 I thought it was not too bad so I had a look at what was in the pot. The main ingredient is “Coconut milk alternative” which is made up of “(water, coconut cream alternative (35%))” 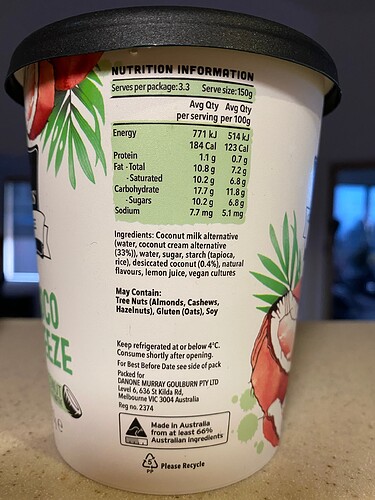 There is no additional information on the other side of the pot to indicate what “coconut cream alternative” is. 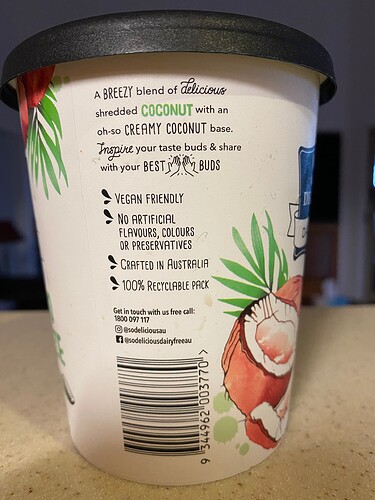 So I am none-the-wiser as to what the main ingredient (obviously apart from water) actually is. Could it be tree nuts and gluten? OR is the rest of the ingredient list what makes up the coconut cream alternative?

So the contents information is either uninformative and/or thoroughly confusing.

Very confusing and hidden, even their website doesn’t give any clues as this particular product isn’t there which makes it even more a mystery.

And googling coconut cream alternative doesn’t give any hints either. Most of these are dairy based which conflicts with the product label.

The other thing is what are ‘vegan cultures’. I assume that that are not the usual suspects that they are living organisms (bacteria)…so I also wonder what these are.

The alternative could be ‘milk’ made from soy, almonds, cashew, oats. Some or all of them.

In fact it says so on the other side of the pack - shredded coconut with an oh-so creamy coconut base.

This makes complete sense: good one !

Someone in the advertising department with limited English

Having had some experience with Chinese and other Asian interpreters

I would have agreed with you had the product been imported. Under the contents in the box it indicates that the product has been ‘Made in Australia’ from at least 66% Australian ingredients. '**

Made in Australia**’ means:

Above Made in Australia it says that it was packed (by an Australian business) for Danone Murray Goulburn with a Melbourne address.

As the product was transformed and packaged here not overseas there it is unlikely there is a translation issue.

confusion would have been avoided if they removed the word ‘alternative’ and just had ‘coconut milk’ and ‘coconut cream’.

If the translator was good enough to do that they might have picked “extract”, “derivative” “concentrate” or several other qualifiers that the original language might have used. As it is we guess.

FWIW. ‘So Delicious’ Ads claim that the products are ‘Dairy free’.
In the 1st pic it says: Coconut Yogurt Alternative.
Is it a dairy free yogurt?

Still doesn’t explain what a ‘coconut milk alternative’ is.

I know many Asians and Europeans who have much better (although imperfect) English than most of us do with their native languages. I can decipher what their written translations mean most but not all the time, and conversationally it always gets there.

As the product was transformed and packaged here not overseas there it is unlikely there is a translation issue.

Many new Australians own and operate businesses, large and small, often employing their own countrymen or other new Australians, so why would a poor or strange translation necessary be a flag or that Made in Australia could only have a perfect translation or statement of ingredients, puffery, or whatever?

Above Made in Australia it says that it was packed (by an Australian business) for Danone Murray Goulburn with a Melbourne address.

Only a thought to save an I guess, you guess, we all guess together.

Please note that I did not raise ethnicity issue, I was responding to a post suggesting it may be a translation issue.

In this case Danone Murray Goulburn is owned by 50% by Saputo a Canadian Company, and 50% by Danone a US subsidiary of the French company, and they would have been in control of the packaging. Again, I don’t see how it would be an imperfect translation issue.

The puffery I referred to (perhaps wrongly) was that I believe that describing something as a dairy alternative would not be in the ingredients as I believe was suggested, rather claims like that would be on rest of the packaging.

When I posted this, I didn’t expect this level of interest or disagreement. As @phb pointed out the product doesn’t even appear on their website, and the only contact information is for social media.

When I posted this, I didn’t expect this level of interest or disagreement.

I believe you did good sharing the product details. If for no other purpose than the ambiguity of and hence poorly delivered product labelling. The true nature and contents of the product should be self evident without the need to seek further details.

The second need has stirred in the community a desire to help solve the problem.

Speculation needing no response at this point in time:
If the answer to the second is a fail, a third might be to resolve how/why this came about with the supplier/distributor. It might also raise questions about the retailers diligence and industry regulation.

Perhaps “translation” is the wrong word ? An Australian could have made the mistake that JMR writes of as a matter of interpretation …?

Say what now? There’s a phone number (a 1800 number) given and clearly readable in the images that you provided.

Whether they are capable of providing any useful information is another question of course.

So the contents information is either uninformative and/or thoroughly confusing.

I tend to agree with you.
I’d first contact the company for more information. (I have done this recently with Coles about the info on a shelf label and am awaiting their response)
If you are still confused or not satisfied with what they say your next step is to contact your state/territory enforcement agency. You can find what that is here
Food enforcement contacts FSANZ does not deal with enforcement matters.
FYI the relevant standard and schedule in the FSANZ Code are Standard 1.2.4 and Schedule 10. Both are available here
Food Standards Code
I was unable to attach them to this post.

However, this does not seem relevant to your problem/question.

I’d be very interested in what you find out because the importance and availability of “alternative/substitute” products and ingredients seem to be increasing.
.

I finally was able to ring Danone on the 1800 number provided. The gentleman who answered was unable to tell me what “coconut cream alternative” actually means, even after putting me on hold and making enquiries. Apparently this information was not available. He said he would make further enquiries and try to get an answer for me. He will get back to me when he has some more information, and I will post the response.

) Oh the suspense!!!
What will it be?!! A mystery alternative to coconut? or, coconut incorrectly described as an alternative? Will it fall on the wrong side of FSANZ packaging laws, discovered being up to no good shenanigans? Or will it plead forgiveness and solve the mystery? Stay tuned for the next episode of……
COCOOO-NUUUUUTS dah dah daaaahhhhh!!!

Danone did as promised and called back today. The answer given is that the ‘coconut cream alternative’ is coconut milk.

It was agreed that the description can be confusing, but was described like this “for legal reasons to differentiate it from any dairy product”. After a bit of round and round discussion, it was agreed that it comes down to the word ‘milk’ that they could not use.

Oh what a tangled web we weave when we first start to deave*.

*1. to stun or stupefy with noise : deafen. 2 dialectal, British : bother, confuse. In other words; marketting copy.