One would expect that by now the major supermarkets would have their websites perfected but that is certainly not the case.

Searching for products on Coles website is far from being user friendly as a typo or spelling mistake involving just a single letter will produce a “No results found” message as the website has no pre-emptive capabilities.

On the other hand, Woollies website has excellent pre- emptive capabilities similar to a Google search, but it cannot find some products which they stock

Searching for “duck” will display toilet cleaners and duck pates but no fresh or frozen duck products.

Searching for “Luv-A Duck” or “Luv” will produce a “No results found” message despite Woollies always stocking trays of the various varieties of fresh Luv-A-Duck.

Most annoying when one wants to see what varieties of duck are on special without having to actually visit the store which I did this week and saw that Luv-A-Duck Duck Confit packs were on special for $10 each.

duck” will display toilet cleaners and duck pates but no fresh or frozen duck products.

With Woolworths (I am not as familiar with Coles), on the left hand side one can see the various product departments which have containing the word duck. In this case, there is one in the Freezer area. If one clicks on freezer, it will show the frozen duck product…such as… 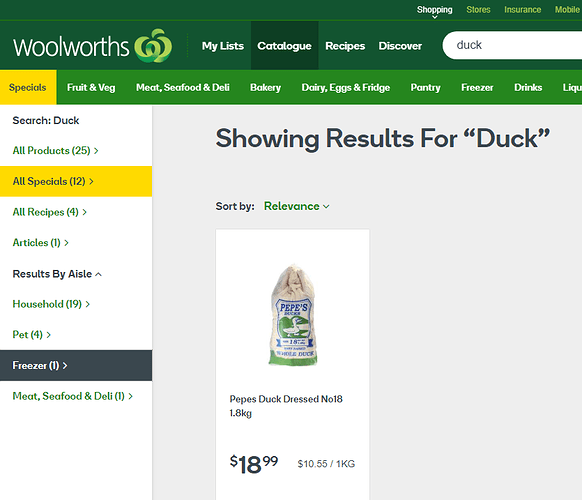 What an absurd way to have to find a product, but even then, it still cannot find Luv-A-Duck.

I also just searched for a “squeegee” and Woollies pre-empted what I was typing.

However, Coles could not find anything until I added the “e” I had left off the end of the word.

Absolutely hopeless. It must be an absolute bundle of fun for all those people with poor spelling.

I tried Woollies website and when I had typed “Bert”, it pre-empted and displayed a list of Bertocchi products including Bertocchi bacon, and clicking on “Bertocchi bacon” provided the correct product.

Coles website is as useless as the search facility on the White pages website whilst Woollies is as good as a Google search.

even then, it still cannot find Luv-A-Duck.

Woollies is as good as a Google search.

But Woolies could not find ducks?

Few if any of our illustrious retailers appear to use google search for their own web sites, and if they do, they have some seriously over-employed staff (mis-)configuring it. Then there are the others that don’t seem to try to do more than the most simple and basic…

Woollies supermarket website has this week’s half-price specials as usual but it also has an offer for 20% off beer, premix & cider on the first page.

It includes Corona for $60 but it is not clear whether that is the single carton or 2 carton price.

I have tried to buy it online so as to see whether it is 1 or 2 cartons but after I add it to the cart, I receive a message that it is not available from my new pickup location.

I can only assume it is actually an offer for all areas except Qld which still has draconian laws to protect the publicans from competition, and the offer is for shopping at Woollies and not BWS.

Has anyone else bought any liquor online from Woollies this week?

In stark contrast, entering either “airwick” or “air wick” on Woollies website resulted in nothing other than Air Wick products.

How hard can it be for one of Australia’s biggest companies to provide a decent website?

And a classic for Steggles Family Roast Chicken on Woollies website.

We’ve taken great care to remove all bones from this product, however some may be present."

Bones in a whole chicken. Who would have thought?

How hard can it be for one of Australia’s biggest companies to provide a decent website?

You have answered your own question. Not so long ago I complained to Bunnings about their search engine returning different sets of product for shelves, shelf, and shelving. They did improve it soon afterwards.

Whilst Coles is leading the way in supermarket website silliness, Woollies is fighting back strongly with instore stupidity.

When I went out to do our Xmas food shop yesterday afternoon, I made the grave mistake of starting at our nearest Woollies.

I firstly inquired in the fruit & veggie section about the Xmas 1kg boxes of premium cherries but was told they had sold out and didn’t expect to get any more.

I proceeded to the meat section and asked where the fresh Luv-A-Ducks were only to be told that they had some a couple of days ago and had sold out. They only received 2 cartons and did not expect to get anymore.

I hadn’t decided whether to buy our half leg ham from Coles, Woollies or our local Supa IGA but a sign offering $10 off any Woollies Essentials ham sealed the deal so I inspected every chump end half ham and took the most succulent looking one.

When I scanned the ham at the self-service checkout, the $10 discount was not applied so I called the attendant.

It turned out that some mung bean had labelled the ham as Buffalo Wings, and after much intervention, the ham was finally relabelled correctly and the $10 discount was automatically applied.

After going to Coles, I returned to Woollies as I forgot the Superior Gold smoked salmon that was on special in the Woollies catalogue and I could not get a Steggles Family Roast Chicken at Coles.

No Steggles chickens or Superior Gold salmon to be found so I asked one person who asked another person and so on until we all ended up at the customer service desk and I showed them the listing in their catalogue.

They finally found a statement which read that not all seafood was available in all stores.

So after all that, all I managed to buy at Woollies without a drama was some brushed potatoes, plus the ham with a drama.

To add insult to injury, the Woollies $20 voucher I was promised would be emailed to me on 23.12.2019 has still not arrived. Perhaps they are extending their staff wage theft program.

And all that without mentioning the idiot who came around the previous corner with its left indicator on as I turned right from the IGA and got upset when I drove out as it was not turning left but going straight.

Or the other idiot who almost took out the front of our vehicle when it failed to give way in the Stockland carpark.

I think I will just go and listen to my Kevin Bloody Wilson Xmas song collection starting with “Ho, Ho, #**### Ho”.

So what do we conclude from this lengthy jeremiad; the shop assistants see you coming and hide all the good stuff and the other drivers are in on the conspiracy. Don’t worry, it isn’t paranoia if they are actually out to get you. Keep smiling it will all be over soon.

Woollies ups the ante in the supermarket website silliness stakes with this classic starting tomorrow.

Woollies ups the ante in the supermarket website silliness stakes

Not wanting to be upstaged by Woollies, Coles has struck back.

I just searched for True Origin pet food andwas presented with the products and a range of other items which had “original” in their names, and an item which stated that they had hidden 15 other items which required ne to confirm I was over 18 by enetring my DOB which I did and was then shown this.

So anyone can enter whatever DOB they like to see the R Rated tobacco listings.

I once was given a birthdate in the year 1066 so they could give me a mobile phone service (the supplier was the one who had to do it and they required the Fed Minister to approve it) so I could quote that DOB on sites when asked for a birth date. The date of birth is at least an attempt to filter traffic, same as requiring CC details and similar practices. Supplying a false date of birth can be considered unlawful or at the least a breach of the site’s terms and conditions and thus protects the business from any breaches of Acts.

I remember reading a tip back in the 1990’s about creating different identities to avoid identify theft when signing up to various bulletin boards or sites.

One such tip included varying your date of birth. It seemed like a good idea at the time. These days all you need is a fake Facebook identity. Before the current system of ID verification, most of us got by without photo ID. DOB has remained a key still used by many to positively locate your records or other details.

Of course for nations where there were national identity cards or papers in use perhaps DOB was less of a concern. For Aussies new to the digital age, our reliance on DOB at that time seems very naive.

Going a little off topic but man the Ikea website is utter garbage. There isn’t an intuitive way to just view everything in a given category. I’ve found my way to that option a few times but still have no idea how I did it. By default it wants you to ‘browse by inspiration’ or ‘browse by series’

Coles has followed Woollies by grouping all their half-price specials together on their homepage, with the first time last week being less than 10 pages and increasing to some 17 pages this week.

Woollies have increased their list this week to a massive 23 pages, but most of the items are socks, jocks, cosmetics and light bulbs.

If I want to buy clothing, I go to Harris Scarfe or Lowes, not a supermarket.

However I still expect to be able to buy foodstuff at a supermarket at good prices.

If I want to buy clothing, I go to Harris Scarfe or Lowes, not a supermarket.

It’s great to have that option.

Most amazingly, the fashion guru of the house can always tell where I’ve been to update the wardrobe. Or to Country Tar-jay because it’s the only option with an hour less travelling. There are a couple of recycled clothing options closer although they tend to cater for the more style appreciative.

If I need to do some serious clothes shopping that other supermarket Big W, or TX Max (Trade Secret), DFO, Best & Less make the extra kms worthwhile.

Mix and Match?
Sorry, forgot Lowe’s, which some might suggest are the experts at that? 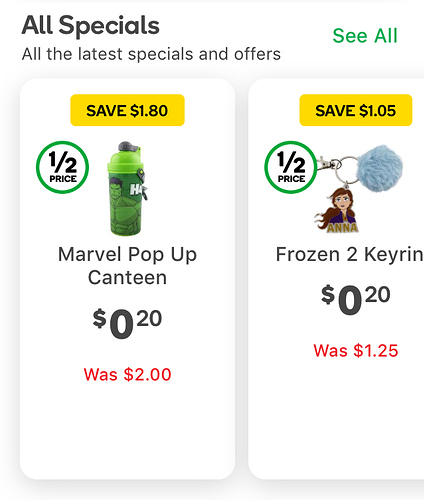 Perhaps take advantage ot the “offer” if the items are of any use to you.