Premium Chicken - Is it worth the $$ and claims?

I noticed today that Coles has a new line of chicken. It claims that it is a “specialty breed” and raised to the “RSPCA Approved Farming Scheme Standards”.

I thought I would go and find out what this speciality breed is at their provided link:

Slow Hills Chicken is a special breed of chicken that matures for longer on free range farms. Our Slow Hills chickens are free range, raised without antibiotics and raised to the RSPCA Approved Farming Scheme Standards.

No surprises that there is no information that isn’t already on their flyer and nothing I could find easily on the internet either. Given I’m not a fan of the RSPCA, I’m not overly convinced about the farming practises either. Their idea of free range is laughable.

Call me cynical and suspicious but I’m not convinced that premium specialty chicken everything it’s cracked up to be.

It sounds like a marketing ploy to make their free range chicken different to others. Whether it is nor not, is another matter.

Choice did a test of 16 ordinary and free range chickens around a decade ago.

Coles and Woolies brand chickens were in the top 4.

The most expensive free range chickens were in the bottom 4.

They are not sfuffed but are lightly marinated and are the moist flavoursome and moist chickens I have ever eaten.

Combine it with our stuffing recipe for a fabulous roast meal.

As some Choice Community members may like a great recipe for the stuffing for their Xmas poultry, I have shared our secret family recipe. I adapted it from a flyer I picked up at a former Brumby’s store many years ago, and which we have used ever since for stuffing for chickens, ducks and turkey buffe’s. POULTRY STUFFING RECIPE INGREDIENTS 8 – 12 thick slices of day-old bread. 1 onion, finely diced. 200 gm mushrooms, diced. 4 -6 cocktail truss tomatoes. 100 gm bacon or ham, chopped. But…

This is very suspicious to me. We raised free range chickens, (in a small way) for a few years: we used organic rules as our standard - although we were unable to source organic grain at the time. The major rule was, from memory, that the birds were not to be killed prior to 10 weeks. We purchased day old meat birds from a hatchery (grown from fertilised eggs imported from the UK - I believe virtually all meat birds grown in Australia are sourced by the same method): raised them until they were a minimum of 10 weeks old, before taking them to a processor. By this stage, they could barely walk, because they were carrying so much weight on legs that were unable to support them (the breeding genetics want big breasts etc, not worried about spindly ‘pins’…). Most of our birds were between 2kg-3kg, bare weight - there was one (probably 3-4 weeks older) I distinctly remember being closer to 4kg, more the size of a turkey!
I realise this is a long story, but I am very aware of the size/weight of meat chickens for general sale: they are processed quite early in their lives (cuts down the feed costs) and so are relatively small. I think that the Coles “special breed” is exactly the same as all the other meat birds in Australia, but allowed to ‘free range’ AND allowed to live 1-2 weeks longer!
Which brings me to ‘free range’ for meat birds… my experience taught me that the birds are very agile, and enjoy free ranging in their early (2 to 4 weeks of life), they become physically unable to move very far once the weight starts piling on. They were never as active, and “chook like” though, as our laying birds.
Ethically, I still buy only free range chicken, because I dislike factory farming, and at least they get some sunlight in their lifetime… and they taste good (but not as good as the ones we grew!!).

PS Just checked the current standards -
[2019 V1 standards “5.2.20. Selection of genetics shall be such as to conform to the principles and aims of organic production.
This shall include preference for slower growing species for meat production and species that are able to perform their natural social and physical functions. As a guide, meat chicken species should be grown to a minimum age of 70 days.”] 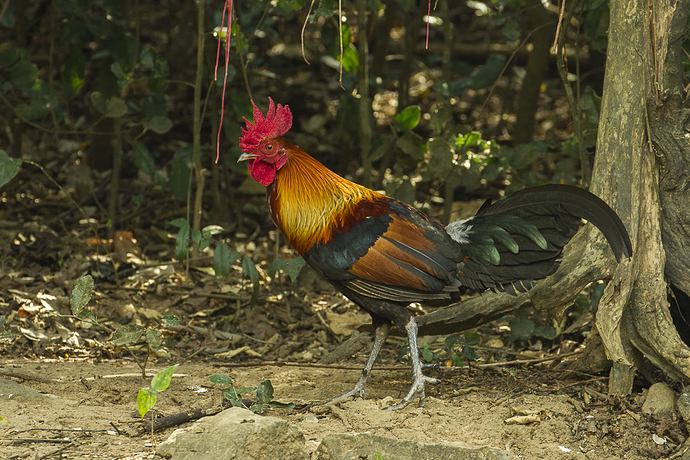 Origin of Domestic Chickens Francesco Veronesi from Italy, Red Junglefowl - Thailand, CC BY-SA 2.0It is believed that all domestic chickens descend from the Red Jungle Fowl (Gallus gallus), which was first domesticated at least five thousand...

Thanks for this post. I found it very interesting. I’m just back from 20 years in the UK and we have found the chooks in Australia a really weird shape with huge breasts. We’ve tried all the organic and free range but they all seem the same. The UK birds are much leaner. Any ideas where we can find a more “normal” chicken?

As per my post above, the best chicken I have found is the Steggles Family Roast Chicken.

Premium Chicken - Is it worth the $$ and claims? Food & Drink

The best chicken I have found is Steggles Family Roast whole chickens sold at Coles, Woollies & Supa IGA. They are not sfuffed but are lightly marinated and are the moist flavoursome and moist chickens I have ever eaten. https://www.steggles.com.au/products/family-roast-chicken Combine it with our stuffing recipe for a fabulous roast meal.

Coles no longer stock them.

As per my other post above, a Choice test of 16 chickens found that the expensive ones were not as good as the cheap ones.

Premium Chicken - Is it worth the $$ and claims? Food & Drink

The UK birds are much leaner. Any ideas where we can find a more “normal” chicken?

The bird you see is a result of decades of selective breeding to produce a specialised meat bird that is heavy and gains weight very quickly and economically. They are raised in cages on a bland diet so they don’t get exercise and don’t have much flavour. I have got used to adding flavour when cooking and not relying on the bird itself. I hadn’t noticed that they are particularly fatty - or were you referring to the amount of meat on them?

You might get a more standard bred yard chicken from a specialist grower. They are likely to be organic and free range. Hopefully they will have more flavour but I wouldn’t bet on it. They will certainly be much more expensive per kilo. You will find some supermarket birds have a more yellowish colour. This is from adding corn to their diet, I haven’t found that it makes much difference to flavour.

Yes, I forgot to mention flavour. They are not very chickeny and I did mean meaty not fatty. The chicken breasts are enormous! Having said that almost every other thing is better here but the search for a tasty leaner chook goes on.

Depending where you are, these guys are amazing. https://www.milkingyardfarm.com.au/

Yes, you are paying big $ but for special occasions or if you only have chicken occasionally it may be worthwhile.

almost every other thing is better here but the search for a tasty leaner chook goes on.

How big is your back yard? How does your council feel about chooks? Some suburban councils are OK except for roosters.

At the moment our yard is only big enough for goldfish! Maybe one day!