Solar And Battery Calculator: See Your Savings And Payback

“Our solar calculator provides you a complete picture of the savings and payback for solar power in Australia - with or without batteries. Simple to use.”

Finn’s calculator is somewhat optimistic for Mount Sheridan in FNQ as it shows annual generation of 10,381 kwh for East facing panels and 9,570 kwh for West facing panels.

Solar storage batteries: Tesla Powerwall and 17 others put to the test

Were they both at exactly 90 and 270 degrees, or a bit off, and both with the same elevation? Does Finn’s calculator use ‘your’ alignments? You know the answer, and thus the issue

Also any shading issues, no matter how minor, can’t possibly be accurately modelled in the general purpose calculator, nor can clipping due to an oversize array for the inverter.

Other discrepancies can result from

Unlike a traditional electronic calculator where answers or calculations are knowns or a fact, these solar calculators are really estimators where answers are based using ‘best available’ data and for guidance purposes only.

Were they both at exactly 90 and 270 degrees, or a bit off, and both with the same elevation?

Also any shading issues, no matter how minor, can’t possibly be accurately modelled in the general purpose calculator

There is no shading whatsoever.

oversize array for the inverter.

The arrays are 6.6 kw and the inverters are 5kw, the same as I used in Finn’s calculator.

The two systems have less output than Finn’s calculator every month, irrespective of whethet the weather has been wet and overcast or perfectly sunny.

Do you know how often there were dropouts or output reductions due to high Vgrid on each system?

Which could be a result of the average weather data used…it could overestimate production through the weather at your house being on average different (say more cloud or hotter) to the nearest representative weather station. Micro and local weather can change over short distances, especially in coastal areas and tropical areas.

Two systems identical. …assume panels exactly same brand and model, along with inverter. Wiring distances and wiring type between panels and inverter are also the same?

Does the household with slightly lower readings have different shading profile as indicated by @gordon …say a TV aerial that shades panels, overhead wires, a vent pipe, a tree or hill that results in more shading particularly when the sun is low etc…

Does the sun hit the panels at for sane time?..after sunrise and before sunset.

May some photos of both (in the same photo/angle) would help determine why tgere should or shouldn’t be differences.

Two systems identical. …assume panels exactly same brand and model, along with inverter. Wiring distances and wiring type between panels and inverter are also the same?

Perhaps Finn’s calculator is based on the Cairns BOM station at the Cairns Airport and does not actually take into account the suburbs to the West where the sun sets behind the Western hills and mountains before the sunlight disappears in areas near the coastline?

That would be similar to the BOM rainfall reports based at the Cairns Airport, which is a rain depression, with the figures well below what we experienced previously at Bayview Heights and now at Mount Sheridan.

Fred, this is getting way OT for a thread about batteries, which I understand you do not have.

Moved to a new topic.

Perhaps Finn’s calculator is based on the Cairns BOM station at the Cairns Airport and does not actually take into account the suburbs to the West where the sun sets behind the Western hills and mountains before the sunlight disappears in areas near the coastline?

You have possibly hit the nail on the head. It is likely that Cairns airport will record cloud cover/sunlight hours data…unlike some of the smaller more regional/suburban stations…and could be the data source. This would explain the discrepancy if your house gets afternoon mountain shadows as the airport may be farther away from the hills west of Cairns…meaning shadowing occurs later in the day.

airport may be farther away from the hills west of Cairns…meaning shadowing occurs later in the day.

The Cairns Airport is right on the coastline with only a small hill to the West of it, but as Finn’s calculator actually requested the actual suburb, I had thought that he had data for each suburb

It would appear that this is not the case and explains the discrepancy.

In the late afternoon after our house is no longer sunlit, I can look down the hill over Trinity Inlet to the East and see those areas still receiving sunlight.

Fred, this is getting way OT for a thread about batteries, which I understand you do not have.

Moved to a new topic.

No it is not as both our neighbour and we have LG RESU10 batteries as I posted in other topics.

What gave you the idea that we did not have batteries?

In the late afternoon after our house is no longer sunlit, I can look down the hill over Trinity Inlet to the East and see those areas still receiving sunlight.

Even local data depends on the exact site location.

Of no particular relevance. 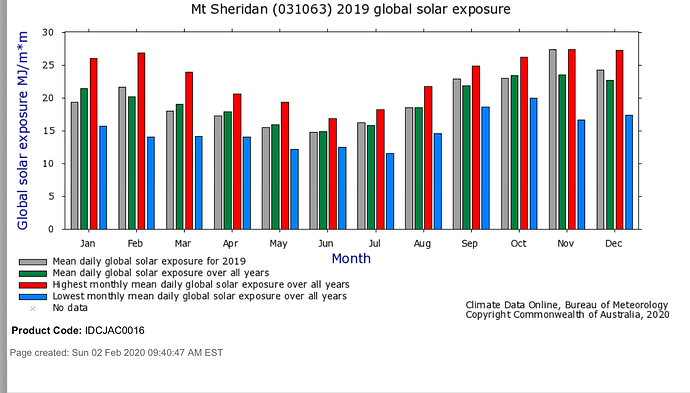 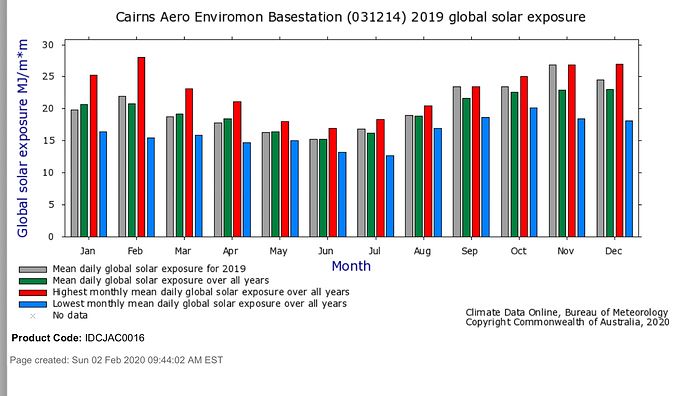 For the inner nerd Finn’s web site refers users to this great tool. Still have the Engineering data for your panels, you can really get precision. Just note that the BOM data indicates that solar irradiance is a bit like rainfall. Highly variable. At any one time your calculation is just as likely to be right as wrong, or worse!
https://pvwatts.nrel.gov/

we have LG RESU10 batteries as I posted in other topics.

Apologies, it wasn’t mentioned in this thread about batteries, so my point stands, as these posts are all about your PV output, rather than battery performance.

…BOM data indicates that solar irradiance is a bit like rainfall. Highly variable

Also the fact that for the vast majority of stations they use numbers derived from satellite data of cloud cover etc, rather than actual measurements of solar radiation, so I think they could be regarded as reasonably accurate estimates.

If you want more precision, get a weather station such as from Davis- I have solar radiation and UV sensors on mine.

A small point on compass points, which may not apply here to a great degree, but it might account for some of the difference.

When doing my detail solar research after the house was pegged out, I found out there are actually 3 types of North, not just 2, and very few people know the difference. If you tell an installer that the panels face due East and due West, they will accept that, as will the calculators. Most of us know about magnetic north, which varies year by year, and is not to be used for solar calculations or panel orientation. True North is the top of the axis of the earth’s rotation, and varies by quite a few degrees in some places from magnetic north. Therefore the correct north to use for solar calculations is True North, as it reflects the angle of the earth’s rotation to the sun’s rays as it varies consistently throughout the year, as I understand it.

However, your property will probably have been built and shown on council plans as being at an angle to GRID north, which is a nominal artificial north on the plans which is used to flatten the earth’s round surface out so we can get a flat map. It will be different from True North.

Obviously compass points east and west are affected to the same degree. You will have to ask a local surveyor what the difference is for your area. 99.99% of the industry does not care because the power output differences are small-ish. But if you are down to explaining comparisons with calculators, this could be one partial factor.

For example, I instructed my designer to make my house 20% east of TRUE north taking into account views, neighbours, eave width, sun angles for rooms and windows, and heat load on western walls etc… He made it 20% east of GRID north, because he was not aware of the difference, so my house is twisted further east in relation to the sun than intended by quite a few percent and so the sun penetration and heat load on the house is not quite what was designed. So I changed my panel orientation to actual True North at time of install.

So I changed my panel orientation to actual True North at time of install.

This is interesting. What is the difference in degrees between true north and grid north at your place? How much difference would installing your panels at grid north make to the energy available?

According to my surveyor, the difference between True North and Survey North for the survey title plan for my block is 8.5ºW. i.e. True N is west of Survey North in my case. I do not know how much it varies around Australia.

For most people adding panels to an existing house where the roof faced roughly north, it would definitely not be worth worrying about in itself, adding only $50 to a $100 a year in power savings depending on all the associated factors.

However the thread was started by a case where two adjacent 90º/270º set-ups were supposedly identical and yet varied from each other and from a calculator estimate and the reasons (which could be many, and be additive as well as multiplicative) were unknown.

My set up beat my installers quoted estimate by >10% or so for for 2019 (perhaps his calculations were deliberately conservative). It also beat the PVWatts calculator by a smaller margin. I suspect the latter is partly due to last years drought. All calculators have to be based on assumptions which will always vary from actuality.

I have learned through life in business, investing and building, that little things can be additive and/or multiplicative and create a surprising effect over time, particularly when there are a lot of them, as there are with solar installs.

For example, everything from panel consistency to reactions to heat, degradation, low light, cable thickness and length, shade & breeze cooling inverters, micro-cracks in bus bars, life of silicon in roof holes and many more small things are effectively multiplied over time to affect life time cost and benefit.

For example, set up A may be pulled down by one poor panel, or by birds crapping. Set up B may be boosted by a batch of panels which all exceed nominal wattage by 5%. Just saying.

Same as compound interest can give a surprising result over time for two similar interest rates even though the interest difference might be small.

I have found that for a brand new install at least, where I had control over every factor, it was worth maximising all the factors to point in the same positive ‘direction’, including some which are more related to probability or risk, which I care a lot about due to future personal intentions. There are all sorts of future likelihoods such as ability to get a tech up on a roof quickly in a rural area after a cyclone, or other effects relating to climate change or EV use, to name a few.

A business which consistently makes an extra few percent per year on 3 different key things over 4-5 years can send a nearby competitor out of business. It is about ducks lining up or not.

That is just me and my goals for my situation, which would not be the same as for most of the population.