Can you take action for better sugar labelling?

We’ve launched our added sugar campaign today calling on Ministers to support added sugar labelling. Ministers meet at the end of this month and they need to know this is an issue consumers care about.

How you can help

Watch this video on the dental issues associated with added sugar:

Here are some images you can share on your social channels to help spread awareness about our campaign: 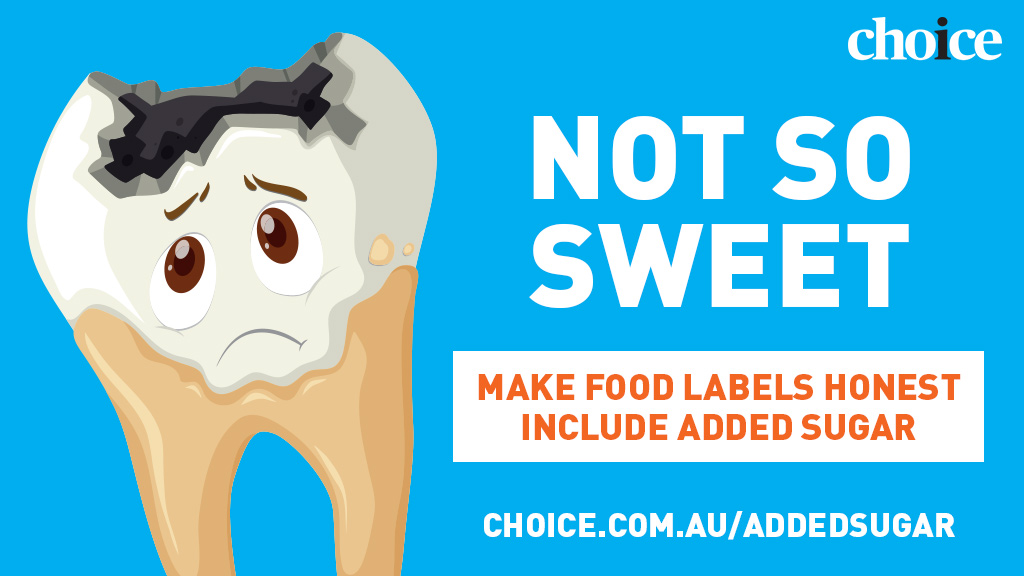 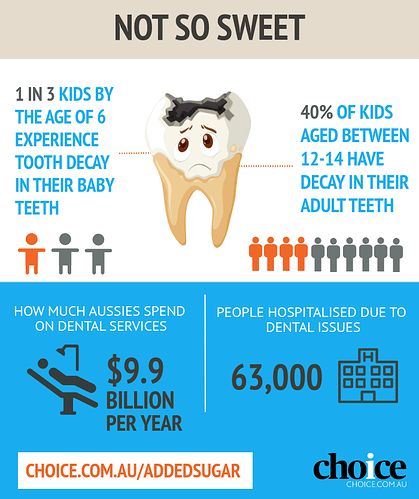 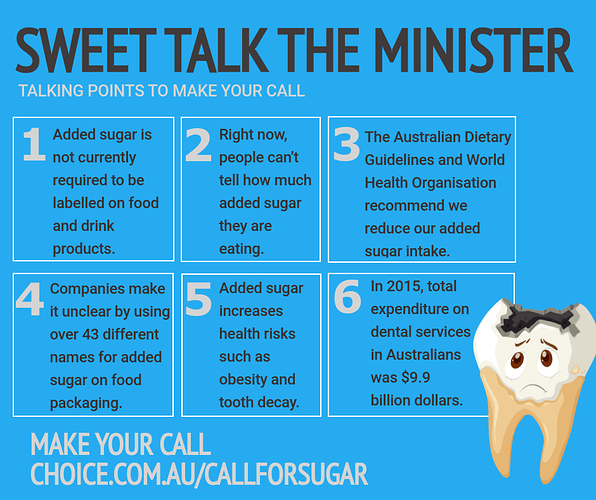 More than happy to share the campaign with my community.

A post was merged into an existing topic: Fructose - A Debate

Here’s some advice from @kday and @bmcmullin on making calls to the ministers office to support better sugar labelling. With an important meeting coming up later this week, your call has never been more valuable. See more about the campaign here: https://campaigns.choice.com.au/added-sugar-email-minister/

Sent the email, posted links to the campaign on Twitter. Will be phoning next couple of days. Hoping the campaign works!.

Whilst this campaign is laudable, I doubt it will make any difference to the state of children’s teeth. Having worked in the field of paediatric dentistry for most of my 38 year career (WA School Dental Service) I can assure you that what is written on the pack pales into insignificance compared to the poor attitude of many parents and patients. Perhaps Choice should visit some primary schools and look what is in children’s lunchboxes. My dental therapists and I did and it is very depressing despite all the advice given by my staff. The norm is small packets of chips, biscuits, sweetened fruit juice, muesli bars etc. It is rare to see a sandwich or piece of fruit. It is the same no matter what the socioeconomic status of the school.I suspect the seemingly universal consumption of non fluoridated bottled water is also a factor. Twenty years ago decay in anterior (front) teeth was a rarity in WA. It is now common, usually in high school patients but also in primary school patients. Once that happens, the cycle of destruction has begun, aided and abetted by the high speed every time the restoration needs replacing, which in anteriors is often. In my opinion, for many patients we are fighting a losing battle.

Thanks for sharing your perspective @zevon1956, I’ll be sure to flag your comments with my colleagues working on the campaign.

We discovered that one of our supporters wrote a letter to their local newspaper about added sugar labelling, which was subsequently published. From the letter:

“I am reticent to use awful puns such as “we can just brush the complainants aside”, “the rot must stop here”, “whingers just gum up the works” and “no-one really cares”, but these are relatively harmless next to the effects that are concomitant with the sugar levels being secreted into our consumption.”

Push against labelling is anything but sweet

Newcastle Herald letters to the editor for November 24 2017.

Sent the new email regarding the failure of the Ministers to act and also tweeted to share. Still hoping it goes well and we get the change done very soon.

Thanks @grahroll, looks like the fight will continue. Our page is updated for others interested in the campaign:

Food and beverage companies are delaying action on health initiatives, making large political donations and obscuring the truth. Write to your Health Minister now to make sure they don't further delay action on added sugar labelling.

Two posts, I think that are worth reading from the topic about identifying how much added sugar is in your diet:

Can you identify how much sugar is added to a product??

Can you identify how much sugar is added to a product? Food & Drink

Methinks Tobacco Industry tactics have been well learnt by others but even if not learnt from them it is the same methods used to smother the evidence. Another part of the release of the papers: https://medicalxpress.com/news/2015-03-sugar-papers-reveal-industry-role.html#nRlv And here is an article which aligns closely with the aims of clearly labelling “Added sugars” https://medicalxpress.com/news/2017-11-sugar-sweetened-diabetes-metabolic-syndrome.html#nRlv @kday The above entries inclu…