Cadbury have announced on their social media accounts that due to rising costs, they will be reducing the size and price of their family size chocolate blocks. What are your thoughts - is this shonky behaviour from Cadbury or does reducing the price ‘slightly’ as well as the size of the product make it okay?
Here’s their official statement: 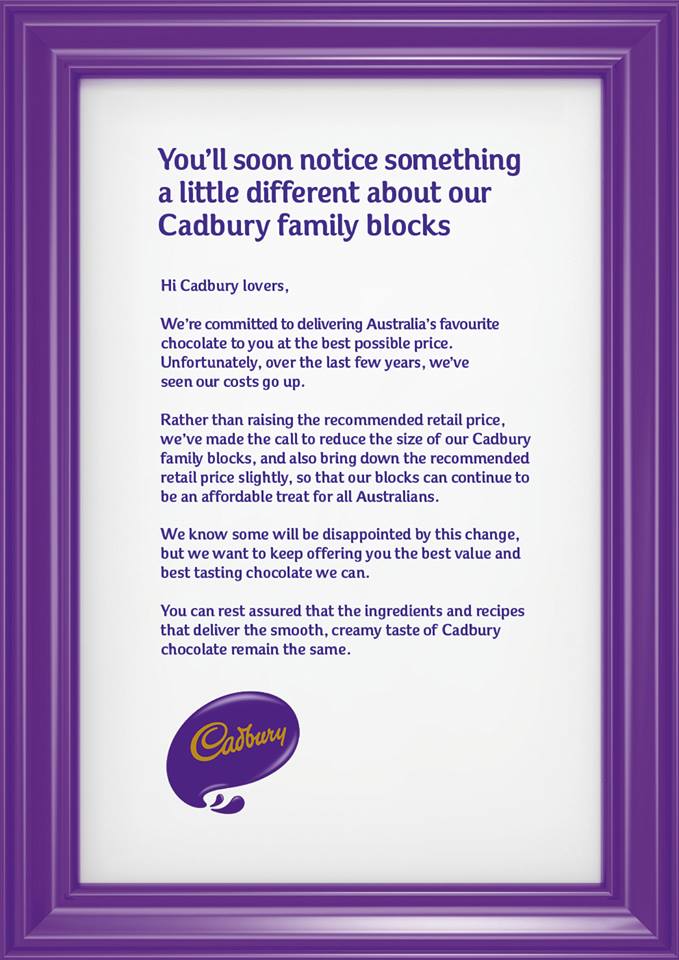 Fred123
1h
Now Cadburys are reducing the size of their family block choclates from 200 gm to 180 gm, a 10% reduction, accompanied by a reduction in the RRP of around 4%.

The family block used to be 250g, then it reduced to 220, to now 180g. I used to think $2 a block was about right, but as the size reduced, so the price went up. Checked at our small supermarket - $5.95 for Cad Dairy Milk 180g. Assume the plain milk chocolate block is shrinking to something less than 180g (160? 150?) Along the way there were some “sneaky” thinks, like reducing the size but packaging in cardboard which hid the lack of depth. Now back in foil, same height, width, but less depth.
Disappointed, but this isn’t the first (or the last) price rise by stealth. I remember my mother, who was a subscriber to Choice from the second edition, railing about yoghurt tubs with less product, same price. I’m not sure they were required to put weights on packages then (1960’s?), as I remember her weighing and decanting product to compare. Thanks to Choice & ACA for wins in these areas.

It was a variety of weights with some blocks being 200 g and others 220 g. You had to look at each variety to see which was which weight.

It is a similar story with their larger “value” blocks which from memory began life as 500 g blocks but have decreased in size to now a meager 350 g (almost down to the old family size now)…Has this been looked at as well?

They are being more up-front about it than many … and this cynic doesn’t even sense a session of weasel words to any great extent, they say “reduce the size” then “bring down the … price slightly” … how many companies have taken a head in the sand or head stuck somewhere else approach and sung ‘la la la’ to themselves to drown out the complaints? most, I’d suggest.

One way or another, they clearly ‘need’ to increase the return for their shareholders … There’s a range of options they had available to them - in each case the unit pricing probably comes out the same, it’s just that chocaholics now find it harder to justify more because the bar is smaller

I get that, I love chocolate - but in all fairness Cadbury is ‘just chocolate’ - there are many far better if one wants a true chocolate experience.

At least Cadbury are out there saying what they have done.

Though! What if one litre of petrol suddenly became 0.9l? To be sure we don’t pay more per litre of course?

What we may be missing for the chocolate block is that there is packaging and handling and store markup that tends to be a per item cost. For a small reduction in package size, there is still the same overhead per packaged block.

So the only cost reduction can be any due to the missing portion that is actually chocolate?

The overall claim by Cadbury is false.
It is not a true saving due to the high cost of packagaing and handling related costs not scaling!

It would save the consumer more per gram of edible product by making the blocks larger not smaller!

Of course Cadbury might suggest it is more about affordability and profits. Shareholder value trumps value to the consumer.

I mean at least it’s a win for public health. I always buy the more expensive darker chocolate because they’re far lower sugar. Sometimes as little as 1/3 as much.

So that means I can eat 3x as much right?

What we may be missing for the chocolate block is that there is packaging and handling and store markup that tends to be a per item cost. For a small reduction in package size, there is still the same overhead per packaged block.

That’s an interesting point … I’ve often wondered about Cadbury packaging - seems a little over the top … I’m know some of the issues, oxidation/light/heat/pests, but a complete foil wrap then paper seems a lot of overhead. Freddo frogs aren’t packaged in foil

So that means I can eat 3x as much right?

I have just nominated Coles for another Spot-A-Shonky Award for their pricing of Cadbury Chocolate blocke.

Woollies is doing exactly the same.

I think the solution is easy- if everyone stops buying it in protest they will soon get the message. There are plenty of other manufacturers and you just might find something better.

Well at least they are notifying us of the change and the reality is that the formulation isn’t changing either. Too many companies just do this without you even telling. Why should Cadbury cop so much for this announcement. Everything is shrinking in size and prices going up and they hide it from us. Good on Cadbury. Anyhow, it’s best that they do that so my husband eats less when he heats a whole block in one sitting (and don’t tell me there aren’t any other who do the same). We continue to push healthiness, perhaps Cadbury is doing it in a different way LOL.

The price reduction will be temporary till people get used to the new size, then it will climb back to how it was before. Some people might fall for it and think the price has fallen in line with the size.

I agree, the price goes down slightly 4% and the size goes down 10 %, perhaps they are doing the best they can.
But you can’t please everybody, shareholders need to accept slightly less profit in these times of vigorous competition from other producers.
On a personal level I prefer another brand which is much cheaper and to me tastes better.

We are actively trying to avoid Cadbury where possible. Not just because of the sizing, but also because of their use of palm oil. Aldi’s chocolate is a very serviceable substitute. And if we want premium chocolate we hunt out Whittaker’s from our local supermarket.

2 posts were split to a new topic: What is your favourite chocolate?

avoid Cadbury … because of their use of palm oil. Aldi…suitable substitute.

This statement is not entirely correct. Cadbury, like Aldi have palm oil free chocolates.

Palm Oil The single greatest threat facing orangutans today is habitat loss. The average annual rate of forest loss in Indonesia was 498,000 hectares (FAO, 2010) from 2000 to 2010 or the equivalent of over 55 rugby fields per hour. The expanding palm...

Any chocolate products either from Aldi or Cadbury not on this list it could be assumed contains palm oil.

Aldi also uses palm oil in many of its products…

Cadbury, in the limited number of products which have palm oil, also use the same certified palm oil sources as Aldi. 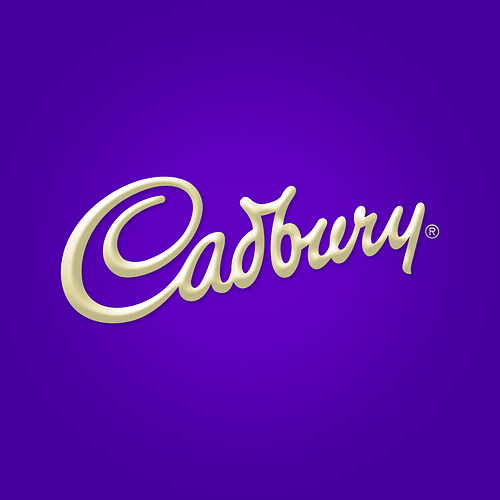 Thanks for the information. Avoiding palm oil is hard: especially given the plethora of names it is disguised under

The Cadbury link you provided is date ‘2015’ and comes from New Zealand. With which Cadbury has a very long and tortured relationship. If I recall, they put palm oil into their chocolate in New Zealand, then reverted when there was a public backlash. Hence the link you provided. They ignored the public backlash here in Australia. For more on the history in New Zealand https://www.stuff.co.nz/business/89733380/cadbury-backlash-a-win-for-kiwi-chocolate-brand. I have to admit: I come from New Zealand, so I’m one of those who don’t particularly trust their brand anymore.

7 posts were merged into an existing topic: Food certification discussion