Bizarre and disgusting foods from when you were a child

As a child , which wasn’t exactly yesterday , the 2 things I could not eat were Brussel sprouts and Steak and Kidney pie . When mum cooked Brussel sprouts I would ask for more mashed potatoes so I could hide the sprouts in them

When visiting one of my great aunts I knew she always cooked Steak and Kidney pie . They disguised it as Shepherd’s pie etc but I could always smell those kidneys .

NB This thread originated from an idea @phb messaged to me . Thanks for the suggestion .

As I have posted elsewhere in the forum, the disgusting foods I had to eat when I was little included tripe in white onion sauce, tapioca pudding, sago pudding and blancmange.

A couple of other items my sister loved but I was not keen on were cooked chicken feet and pigs’ trotters.

However, growing up in FNQ in the 1950’s & 1960’s, there were some foods that the locals were unfamiliar with, but as an uncle worked as an engineer on ships, he would bring Brussels Sprouts and Broccoli to our grandparents in Townsville and our family in Cairns many years before it was ever available locally, and I have always loved both veggies.

Some former US Presidents obviously never appreciated what veggies were good for them.

My grandmother would cook them on the day of StJohn the Baptist
( 24th of June). She’d make a lovely
tomato sauce for them and all the family would enjoy the dish.
Not me. I steadfastly refused even to taste it.
I still will not have anything to do with snails.

Brain “cakes”. My parents loved them as a breakfast treat… Yuccch!

Our son would try just about anything at a restaurant and at one former French one in Cairns when we went there for dinner when he was a teenager, he ordered and ate them.

No way for me let alone my wife.

Of course it also depends a bit on what was considered everyday fare at home.

I’d rate as a kid steak and kidney as great, lambs fry and bacon as delightful, and crumbed garlic lambs brains as heavenly. Just don’t ask me to prepare them.

Alternately oysters from a skinny glass jar, gherkins and cocktail onions were well and truely in the disgusting list. Along side most vegetables other than potatoes, corn and peas.

Moving along and up the scale of yuck, smoked cod in white sauce, all those thousands of bones was worth almost any excuse to miss.

Oddly tomato sauce, salad dressing (vinegar) and mayonnaise were also 9 out of ten on the yuck scale.

Top of the yuck list, I’d suggest powdered sulphur in treacle to be the worst, after castor oil for treating ailments.

I’d rate as a kid steak and kidney as great, lambs fry and bacon as delightful, and crumbed garlic lambs brains as heavenly.

Yes! Yes! and haven’t tried them. How can anyone not like Steak and Kidney?

Anchovies … lashings of them, on pizza. Don’t care what kind of pizza

Mashed potato with peanut butter mashed in - seriously, try it.

The only bad thing from my childhood was boiled giant broad beans. Eating them is definitely a sign of insanity, or worse

nd at one former French one in Cairns when we went there for dinner when he was a teenager, he ordered and ate them.

I remember trying snails at that restaurant (over 40 years ago…); an interesting experience!

Only thing I think I ever rejected was Fish “cooked” in lime juice. The acid in the juice “cooks” the flesh, it isn’t heat cooked. My father enjoyed it I think but it was not a taste I acquired at the time. Not a problem now though.

Liver I now reject unless required for starvation survival techniques but happily ate all offal and meats when young and less knowledgeable. I readily ate all vegetables, all fruits I could safely get my hands on (never grab a prickly pear fruit off a plant with bare hands), seaweed (there are some really nice ones), seafood of any edible ilk. My father used to say of me that I would eat the bum out of a rag doll through the seat of a cane chair…perhaps that may end up my epitaph.

Brussel Sprouts were on my list never to eat once the choice was mine.
I have since heard the major factor in the like/dislike of these is in ones genes.

Only thing I think I ever rejected was Fish “cooked” in lime juice. The acid in the juice “cooks” the flesh, it isn’t heat cooked. My father enjoyed it I think but it was not a taste I acquired at the time. Not a problem now though.

Sounds great - reminds me slightly of rollmops, and maybe even … 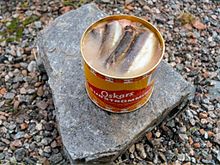 Surströmming (pronounced [ˈsʉ̂ːˌʂʈrœmːɪŋ]; Swedish for 'sour herring') is a lightly-salted fermented Baltic Sea herring traditional to Swedish cuisine since at least the 16th century. The Baltic herring, known as strömming in Swedish, is smaller than the Atlantic herring, found in the North Sea. Traditionally, the definition of strömming is "herring fished in the brackish waters of the Baltic north of the Kalmar Strait". The herring used for surströmming are caught just prior to spawning in Apri...

I grew up with peanut butter and bacon sandwiches. Neither bizarre nor disgusting in my case. Don’t discount it if you like peanut butter or bacon separately. Keeping a few rashers of cooked bacon on hand for the occasion also makes it easy and quick when you want one. I prefer crispier bacon but that is just me.

I remember trying snails at that restaurant (over 40 years ago…); an interesting experience!

Little chewy balls of protein in so much garlic and butter that they could have been little balls of rubber.

It was probably the way they were cooked. Back then brussels were boiled into a greyish soft mash which was disgusting. Steamed, raw or lightly neuked they are crunchy, tasty and GREEN. I hated seafood – still don’t like it – but that I think comes from the weekly torture of having to swallow a tablespoon of cod liver oil. Fatty fish still makes me retch.

Are these crumbed pan fried lamb brains or something else?

I loved the ones my grandmother and mother used to cook but I have never cooked them as my wife would run out of the house at the very thought of them.

I’m fairly sure they were lamb. I remember they were soaked overnight in brine, then the membranes peeled (? next morning), then the standard flour, egg wash & breadcumbs. I’m sure that my palate nowadays would probably like them - as long as I had no idea what they were…

Rusks…these are possibly one of the most disgusting things one can give a child. We were given some by friends when we had a little one…but the little one refused to eat them. I decided to try one as I thought it can’t be too bad .

This was a mistake. If one likes dry, bland, stale, floury and cardboard tasting (which possibly tastes better and might be a good substitute for a rusk) food, then by all means go an get some…and then buy a good beer to wash them down.

I think I now know why some parents have children with eating problems such as being overly fussy. If I were a child and were given a rusk, I would be weary/question any food which was given to me using the same hands.

Having sampled other baby foods before requiring an infant to ingest it I can say this is not isolated as to the failure to provide something that would resemble food we would eat. Perhaps a topic all on it’s own about the commercial brands of what they consider baby food that by my estimation is something akin to eating unpalatable sludge. Should some even be properly described as what we would consider food to be.

Sounds like the army biscuits we had in the CMF (Army Reserve) decades ago.

You could not break them or cut them.

I grew up eating “everything”, and I mean everything as part of our payment was a mutton sheep each week that was so close to death by old age … Brains, soaked and membrane removed, crumbed, fried and served with a honey sauce (I have never been able to reproduce grandma’s honey sauce). We had “poor man’s roast” boning the ribs, filled with diced vegetables, rolled up, tied and slow roasted, offal, etc. I don’t have any childhood food I didn’t like.