When is a FitBit Charge 3 not a FitBit.
This popped up in the Apple News App between news items on the iPad today. It’s hard to miss a picture of a FitBit Charge 3, and the tag line anyone caring about their seniors could not resist. $49 wow! 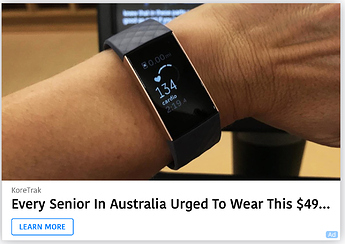 If you click on the link, and take one for the Choice community this is what is revealed. 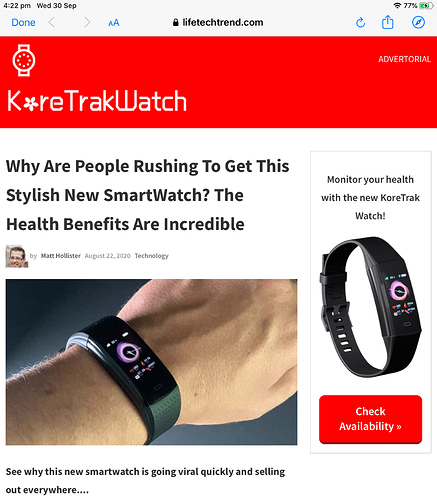 It looks nothing like the product in the teaser, and is definitely not a FitBit product.

Oh Apple, how low have you gone to join the trash heap of misleading and deceptive product marketing?

Sorry, I am not understanding why you think Apple has erred.

Kore Health, the makers of the TrackWatch, are not part of Apple. So it is not Apple that is misleading, but rather Kore Health who has posted the ad.

So it is not Apple that is misleading, but rather Kore Health who has posted the ad.

By the same logic are Google or Facebook anymore or less responsible or in control of the marketing they permit through their delivered content?

I am surprised that they would allow a competitor the use of their product to leverage sales.

Kore Health, the makers of the TrackWatch

Possibly not Kore Health, but the advertising agency they use.

From what I understand, advertisements can be planted directly by advertising agencies/anyone with access can upload advertisements for broadcast. Apple, Facebook, Google etc seem to be unable to control what is advertised and rely on complaints for reviewing and taking action. Rather than review before broadcasting. This allows, as raised in this post…

Self regulation for the mega multinational advert platforms isn’t working and as such allows Australians to be defrauded of their hard earned cash by fake, misleading or scam advertising…

By the same logic are Google or Facebook anymore or less responsible or in control of the marketing they permit through their delivered content?

I think this is where it’s hard to argue it’s Apple’s fault. Facebook brought an entire US election into disrepute by allowing knowingly misleading accounts to run paid advertising. And I’m yet to see Facebook get a single penalty over it.

Should this change? To an extent yes. But as it currently stands there is no legal reason Apple would need to fact check ads beyond ensuring they don’t contain illegal content

I don’t really see what the problem is. I don’t use Apple News, I prefer to go straight to the source, but I had a look just now and nowhere does it say this is a fitbit device. In fact fitbit is NOT mentioned at all. Not on the Apple News app, nor when you follow the link. Of course its obvious to those of us who know the fitbit range that its likely a knockoff, but for joe average… no problem. Really.

nowhere does it say this is a fitbit device. In fact fitbit is NOT mentioned at all.

That’s obvious from the second screenshot!
The open screenshot is of a FitBit Charge 3. It’s readily recognisable as such to those who are interested in the product. My partner has one. That’s the point in question. Using an unacknowledged image of a competitors product and tag line that invites curiosity as to is this a genuine cheap offer. Are there other terms and conditions? Only following the link provides an answer.

Consumers have a choice to ignore it or follow the link.

It could be considered the last applies with the product brand name ‘KoreTrak’ appearing below the Image of a FitBit with no further explanation.

Perhaps Apple are happy to allow such advertising. It appears a deliberate choice Apple has made to allow advertising within the App. Whether that meets current tests that make Apple responsible as the publisher, I’m just asking the question. Although I have made my mind up that the advert should not be acceptable practice, whether it is or is not legal.

For the first time recently — and after extensive negotiations on the terms of the interviews — Apple agreed to let a Times reporter in on how it operates Apple News.

There are ambitious plans for the product. Apple lets publishers run ads in its app and it helps some sign up new subscribers, taking a 30 percent cut of the revenue. 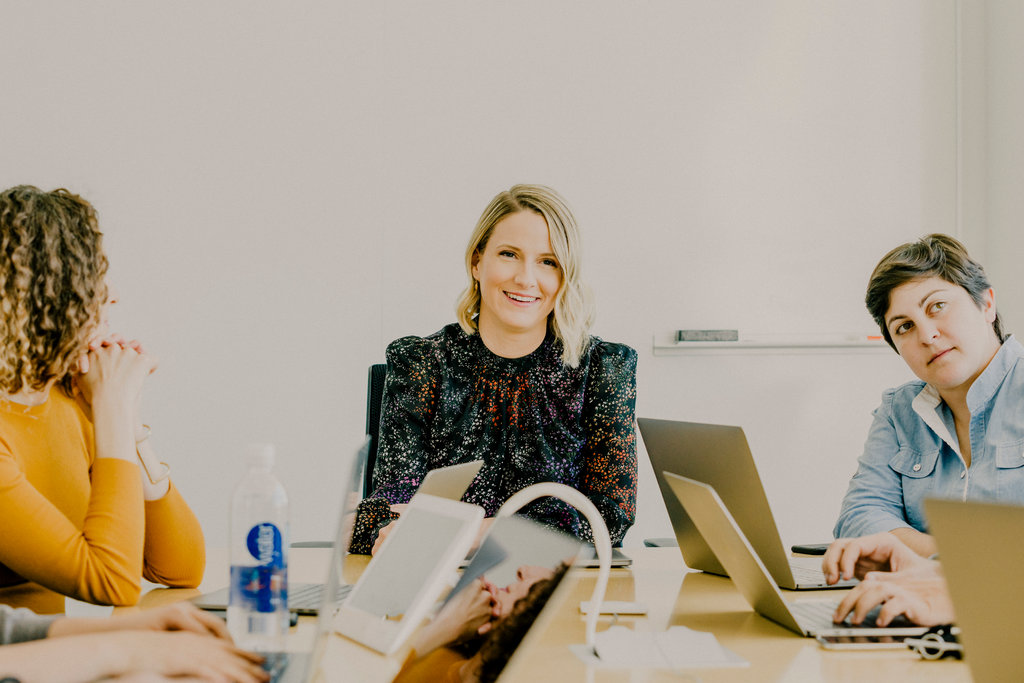 While Google, Facebook and Twitter face scrutiny for spreading misinformation, Apple has avoided scandal by using people to pick what news to show. Is that good for news outlets?

I agree with your take on the matter.

In fact the use of Koretrak just under the Fitbit image may be construed by viewers that the watch displayed is one produced by Koretrak. It is devious, deliberate and I think breaches copyright law. The fact that anyone who knows the product can say that’s not Koretrak is not the point, the point is that it does not clearly acknowledge the product as belonging to Fitbit Inc. Some of it is puffery, but some a deliberate attempt to deceive in my opinion.

The open screenshot is of a FitBit Charge 3.

mm, thats what i tought must be a knockoff.

With a bit of hunting, it is another scam/sham product, masquerading as something which may be legitimate.

Why is it a sham, because it appears on the Youtube Scam Adviser Reports channel which has been set up by scammers to provide information that their scams are not really scams. It also has favourable reviews on sites known to be used by scammers to post ‘independent’ reviews to help catch the unwary.

If you see this advertisement, report it to Google. Apple, Facebook etc.

This is another one doing the rounds…

And what is sent when the scammer take your money…

Apple receives millions of ads to place, just like Google, and Facebook, and it is impossible to have people review all of them. These services rely on users to report bad adverts so that they can be removed.

Apple is no more responsible for this than they are for the other million misleading adverts, or Google is for the millions of misleading adverts on their platform. Or Facebook, Twitch, YouTube, Spotify and so on.

For that matter, Apple is no more responsible than a newspaper that publishes an advertisement that turns out to be for a understocked loss leader, or than a radio station which places a Viagogo advertisement.

Apple receives millions of ads to place, just like Google, and Facebook, and it is impossible to have people review all of them.

I mean Apple makes trillions of dollars. They could afford to. But you’re right that other big tech companies do the same. That just means we should start holding them all to that standard

Does responsibility for ones actions apply to a corporation, as it does for individuals?

I’ve just noticed a change to the presentation of the KoreTrak Advert leading image imbedded within the Apple News items. 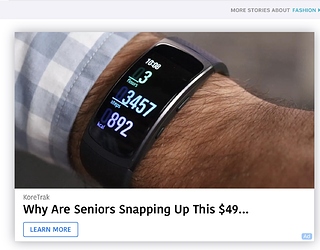 It no longer shows incorrectly an image of a FitBit Charge 3. Not sure which product it is this time. The displayed image is not typical of the common promotional shots of a real KoreTrak device.
Could it really be a KoreTrak?

Does responsibility for ones actions apply to a corporation, as it does for individuals?

Long before Apple was even founded, we had established principles about who is responsible for the accuracy of advertisements, and I have not seen a persuasive argument for upending those principles.

Could it really be a KoreTrak?

Nope, its not. I don’t know why they even bother to do this. I just took a look at the Koretrak website and the gadget looks to be pretty decent on its own, without needing to use photos of other devices. Weird.

I said that Apple should not be held responsible for the adverts (actions) of others.

That is where the problem lies.
Digital media if that is how we wish it is a countable for it’s actions. If it is not then any and all content is permissible without recourse.

Apple of all businesses trades in setting itself above the average product. Calling it out, for now, is the only tool we have. Apple accepting and delivering dodgy advertising does not pass the pub test, if it is to set itself apart as a brand.

we had established principles about who is responsible for the accuracy of advertisements, and I have not seen a persuasive argument for upending those principles

Something to be reminded of then that applies to all digital publishers and products - legal, doubtful and illegal products included?

The law may not be offended.
Should consumers be asking for Apple and other digital publishers be accountable for dodgy marketing through it’s News Service?

My sample of one says ‘Yes they should’!

Should consumers be asking for Apple and other digital publishers be accountable for dodgy marketing through it’s News Service?

My sample of one says ‘Yes they should’!

Unfortunately for online advertising, legally the platform isn’t. The system is complaint driven and the platforms only respond when complaints are received by them. Platform users do the work to moderate advertising,

Advertisements are also user/advertiser generated and posted by users/advertisers. No longer do platforms have any input into the content creation …they just provide the platform for broadcast/dissemination.

Digital media if that is how we wish it is a countable for it’s actions. If it is not then any and all content is permissible without recourse.

I have not argued that digital media should be unaccountable for its actions, only that accountability for a misleading advertisement lies with the advertiser because they’re the ones performing the action, and that the accountability that you want to impose on Apple is an impossible standard for any publisher to meet.

I believe they should only be as accountable as non-digital publishers. It’s not a publisher’s job to research every photo and every statement in every ad, and it would be impossible. Impossible in terms of time and money, and impossible for research to reveal every possible form of deception, in any case.

This is unlike the traditional print or broadcast media.

Hmm, I do not think that traditional media provides effective oversight of the advertisements it carries. Certainly it does not research ads to the degree that was being asked of Apple in regards to this Kore Health ad. It does not research all photos of all products to ensure they match descriptions. A timely and forceful response to complaints about ads from the public is not something I associate with traditional media either. In the twenty years since Google started AdWords, I have honestly seen little to differentiate the old and new kids on the block.