Anti-ageing cream - does it work?

Where do we start with anti-ageing creams. Firstly, we should clarify that said creams typically claim to reduce the visual effects of ageing, not ageing itself (that would be a different kettle of fish).

The price of such creams varies as wildly as the ingredients. In extreme cases, there are products like La Mer that come in at a staggering $2400 per 500mL on some websites (pictured below). As a side note, La Mer moisturising cream did not score too well in our moisturiser tests, which highlights that price does not equal quality.

That aside, does anyone use these creams and do they feel that it works as intended. Is there any scientific basis to the anti-ageing or rejuventation claims? We’d love to here your thoughts and as always, we’ll hand out BS Buster badges for those who provide well-reasoned or well-evidenced answers. 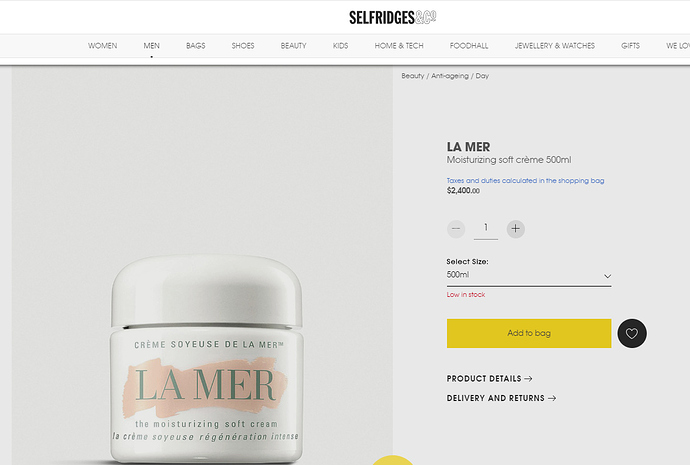 It is always bought on a half price sale.

How many dollars per year of age reduction is that?

I don’t know, but it’s probably cheaper to pay someone to photoshop all your photos!

but “someone I know’s” complexion does start changing if it is not used for a few days.

Sounds a bit like ‘Beau-line’ in the movie Catwoman

If they use retinoic acid or Retinol (it is changed to retinoic acid by cells so is weaker than pure retinoic acid) in reasonable concentrations (not the other retinoic compounds eg retinyl propionate which are much weaker in action) then on some skins it will improve appearance as it will cause the skin to exfoliate and newer skin cells to be visible thus making the skin look fresher and younger (also some evidence pro-collagen production may be increased). Retinoic acid is a form of what we call Vitamin A. Another acid that can do this is Salicylic Acid (generally 2%) as it causes the skin to exfoliate as well by breaking down Keratin bonds and increasing moisture in the skin layers. Salicylic Acid is not to be used on the face unless under medical direction. The other way creams/serums/solutions can help minimise wrinkling is to provide a waterproof barrier so that moisture is retained in the dermis and so the skin “plumps out” a bit. Both Retinoic acid and Salicylic acid are effective treatments for acne.

The acid solutions should not be used on eczema, rosacea or psoriasis as they will increase the vascularity of the skin and can make the conditions worse. In psoriasis retinoic acid must only be used under medical supervision.

Time frame for visible improvements range from 6 to at least 12 weeks of usage. Retinoic acid will work faster than Retinol and usually needs to be obtained with a prescription (I am sure there are other ways but medical supervision is highly/strongly recommended). Retinol as it is weaker is typically the one you can buy in products over the counter.

The plumping effect of barriers only takes a couple of days to be apparent but the effect is easily lost when no barrier is in place. This effect is what most users notice the most as it is quickly in evidence to the eye

I’m sorry, I never used those creams, in fact when I was younger my skin would break-out if I used any moisturiser or face cream. Even now, though my skin is getting dryer, any cream which is a bit rich will be unwelcome. But I do use a sunscreen daily.

Is there a scientific basis to the anti-ageing claims? Dermatologists strongly raccomend daily use of sunscreen and sun protection with hats and so on, also not to strip away natural oils by too aggressive washing with strong soaps which dry the skin, and the use of products which peel dead skin on the outer layer and reveal a younger layer with less visible lines or sunspots. With those the use of a sunscreen is essential as new skin is very easily damaged by UV.

The cosmetic industry tells us that by using Glycerin made from Mineral Oil, and Lanolin Alcohol ( highly comedogenic) like the ingredients in the very expensive La Mer, is good for our skin. Most of the moisturisers listed above contain Mineral Oil, Glycerin,Petrolatum,Dimethicone, and a few even Alcohol Denat.?!

On practical evidence, if a rejuvenating cream existed, the rich and famous who are not so young anymore, would not need so much plastic surgery

Don’t be! I’ve never used them either

I generally just wash my face with water.

Is there any scientific basis to the anti-ageing or rejuventation claims?

Scientifically and anecdotally, about the only anti aging tonic that is sold over the counter is alcohol…the more used the younger others seem to get.

There is scientific evidence of some compounds in skin minimising the aging effect, but there is no scientific evidence when the same compounds added to a cream, gel, lotion etc have any benefits in relation to making tge skin looking younger in the medium to long-term. The concentrations in any product, even if there was some limited evidence, are at concentrations far less than would have any potential effect.

The only anti aging measure that does work is to limit alcohol consumption (there goes my first one), don’t smoke and to protect skin from the sun. These three are proven to work unlike any cheap or expensive cosmetic solution (apart from medical interventions such as face lifts or fat injections).

Interesting to read that ‘Someone you know’ complexion starts changing if Revitalift cream isn’t used for a few days, @PhilT , because the Ad for the product claims: ‘…Turn back the clock…this formula fights the signs of aging…powerful anti wrinkle ingredient known to stimulate skin cells renewal for a deep anti-aging action…’
All of this magically disappeares after a couple of days of not using cream?

All of this magically disappeares after a couple of days of not using cream?

I guess ‘Long lasting’ is anathema to cosmetic companies

This is the plumping effect of the moisture barrier eg petroleum jelly or really any seal on the skin as it reduces the loss of moisture from the skin and so the skin becomes more full of water and looks better (sunscreens with moisturisers or sorbolene lotion can also do this). Retinoic acid actually does remove older skin cells and does cause pro-collagen increases (there is scientific evidence to support this claim) and so will improve on some people their skin appearance but this may first cause peeling and reddening of the skin. Conentrations of the retinoic acid or retinol need to be in sufficient concentration to have any real effect . The benefits of using Retinoic acid take weeks to really become apparent and even then at least a couple of times a week there needs to be maintenance applications to keep the process going…an expensive ongoing cost to look somewhat better in some cases.

As @phb remarks the best “anti-aging” processes are to use a good quality and high rated sunscreen all day everyday, avoid too much sun exposure, avoid cigarettes and their smoke, avoid too much alcohol consumption and add to that drink plenty of good fluids eg water, avoid harsh cleansing of the skin (our natural oils help provide a water resistant barrier) and love the look of the body you are in rather than what magazines etc tell you you should look like.

the retinoic acid or retinol need to be in sufficient concentration

From the list of ingredients of Revitalift Day Cream, Retinyl Palmitate, a chemical form of retinol plus palmitic acid, comes at 10th.
Listed 34th is Palmitic Acid ( from the fruit of the oil palms).
Listed first are: water, glycerin, paraffin, mineral oil. This would explain the short lived efficacy of the cream, to some extent.

While obvious, there is an inverse relationship between the duration or efficacy of most things, especially items such as cosmetics, and the dividend stream (profitability) they generate by repeat purchasers. $$$$$$

I am a 67 year old male and I frequently receive comments about my young and fresh-looking skin that belies my age. Genetics certainly plays a role but I attribute this to long-term use of moisturisers, always with sunscreen with a minimum of SPF 15 but 30-50 if I know I will be in the sun. I also wear a hat when outdoors. At night I use a non-SPF moisturiser. Also important is that I have used alpha hydroxy acid on my face once or twice a week for about 20 years. I used the US made Neostrata Ultra Smoothing Lotion 10% AHA for many years but my preferred one now is the Australian-made Ego Elucent Body Moisturiser 12% AHA’s. I apply in the morning after showering and shaving.

The concentration of retinoids does not need to be high eg retinoic acid (tretinoin) in it’s acne treating form is in a concentration of about 0.1% and at that level can be quite irritating, dryness of the skin, peeling of the skin, redness, blistering, sensitivity to UV light eg sunlight, crusting, being some of the possible reactions particularly early on. Retinoids aren’t for every skin (as noted previously certain issues can be exacerbated and then the products should only be used with medical supervision) and pregnant women or those seeking to become pregnant are advised to avoid using Vitamin A based creams or supplements. Carotene from eating fruits and vegetables are safe to use as the body converts this as needed.

Also some products use BHAs (Beta Hydroxy Acids) eg salicylic acid, and these are discussed at:

There are certainly cheaper ways of obtaining these acids than buying cosmetics.

the morning after showering and shaving.

Shaving does not only remove facial hair, but also dead skin cells from the surface of the skin: an instant, and inexpensive exfoliant to prepare skin to absorb moisturiser!

The only sure-fire, anti-ageing skin protocol is this: choose your parents carefully.

You’re correct but the AHA goes parts of my face that don’t require shaving.