When new flavours based on old favourites completely miss the mark

Yesterday we decided to try one of the new Peters Ice Creams/Arnott’s Biscuits hybrid frozen deserts and opted for the Caramel Crowns flavour in the tub. 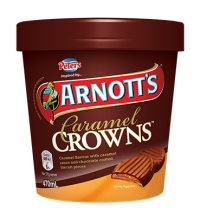 The blurb on the front of the tub describes it as “Caramel flavour with caramel sauce and chocolate coated biscuit pieces” with a picture of a very nice looking cross section of a Caramel Crown biscuit with the caramel goo oozing out of itself.

So did it deliver when it came time for the family to taste the thing? Not one bit. The only thing that actually resembled a Caramel Crown was the picture on the tub.

While it was marketed to look like a gourmet ice-cream product, by being sold in a small tub that resembled the other higher quality ice creams on the shelf complete with a highly inflated price tag, it didn’t even actually contain ice-cream. Instead it was made up of a very sugary ice-confection that tasted not of caramel, as promised, but of a very sickly sweet fondant that you might find wrapped around a wedding cake. It tasted more like an Iced VoVo, which is strange as they’ve also brought out an Iced VoVo flavour. The only thing that was missing to complete the VoVo’ness was some dessicated coconut on top. The smear of caramel sauce that was confined to a small area between the iced confection and the inside of the tub and the addition of tiny biscuit crumbs did not do anything to make this sickly sweet concoction even remotely resemble the biscuit it was supposed to emulate.

This isn’t the first time that a new flavour has completely failed to hit the mark though. I remember when the peanut butter Tim Tams first came out and they didn’t even have peanuts in the ingredients, let alone any flavours that were slighly peanutty. And what about the Golden Gaytime Cornetto? Since when does a Golden Gaytime flavour include a thick gluggy chocolate sauce that resembles the cheapest of generic brand chocolate toppings in the mix?

I was surprised to see a tub of Polly Waffle ice-cream in the freezers this week next to a Red-Skin flavoured tub and a Fantales flavour, particularly since the Polly Waffle was discontinued by Nestlé back in 2009. Not in a hurry to try any of them after being burnt by other new flavour combos that simply didn’t taste anything like what they’re advertised to be.

Could this be classed as false advertising? I’m not happy about forking out the extra dollars and expecting flavours based on the description to only find out it was all just a con to get you to pay more for something that’s completely sub-standard and bares no resemblance whatsoever to what was promised. Do they not taste the things before signing off on their new recipes? Do they think the public won’t notice that the flavours are completely wrong and we’ll just blindly go back and purchase more of the same simply because it has a nice picture and a nice description on the packaging?

My mind is boggled.

Give all of them the flick & buy Weis’ ice confections. A Qld brand that has been around for at least 40 years that I know of (I first tried them in Brisbane in 1974). Great flavour combinations: look exactly as shown on the packet and taste great. Have seen them in Coles - not sure about the opposition!
Only downside for me is that they melt fairly quickly (but that’s better than a Coles Icecream Sandwich that hadn’t melted after 4 days…).
Also - they are not icecream as such, more a type of gelato - and aren’t sold in tubs??

While I’m sure there are many varieties on the shelf that actually live up to their claims, the reason I started this topic was to discuss the brands that don’t live up to their claims and why they might think that it would be a good marketing move to so blatantly deceive their target market. What is the point of saying something tastes one way when it doesn’t even come close to the flavours they’re advertising?

why they might think that it would be a good marketing move to so blatantly deceive their target market. What is the point of saying something tastes one way when it doesn’t even come close to the flavours they’re advertising?

Just been bought out by Unilever.

From Wikipedia on Unilever:
Unilever (/ˈjuːnᵻˌliːvər/) is a Dutch-British transnational consumer goods company co-headquartered in Rotterdam, Netherlands and London, United Kingdom. Its products include food, beverages, cleaning agents and personal care products. It is the world’s largest consumer goods company measured by 2012 revenue,[4] and is also the world’s largest producer of food spreads, such as margarine.[5] Unilever is one of the oldest multinational companies; its products are available in around 190 countries.[6]

Well, I can say I’ve tried two new flavours. I was brave and tried the Polly Waffle Ice Cream tub and the Wagon Wheels Ice Cream Sandwich. The verdict? Polly Waffle tasted nothing like one. If anything it bordered on the generic sugar flavour that was the Caramel Crowns Ice Cream Tub, but with added vanilla, lots of it. The choc coated wafer bits were more like small hard frozen clumps of sugar. Obviously Nestles has no idea what a Polly Waffle tastes like any more seeing as they were discontinued 8 years ago.

Surprisingly, the Wagon Wheels ice cream came out a winner. It tasted like a Wagon Wheel but with Ice Cream instead of Marshmallow. My partner was reading the ingredients list for one of the new Arnott’s ice creams and noted that one was cream and/or some other ingredient that isn’t even remotely like cream, so maybe that’s where the Caramel Crown tub went wrong for us while other people have gone online and think it’s wonderful. Ours was a batch that had no cream in it, which would explain why it tasted more like a sugary fondant than an Ice Cream. And/or means it has either ingredient 1 AND ingredient 2, or it only has ingredient 1 OR ingredient 2, and when ingredient 1 is a main component, substituting it for ingredient 2 isn’t going to work if ingredient 2 is a completely different product that has no resemblance to ingredient 1 whatsoever. It’s a bit like saying your basic jar of peanut butter has peanuts and/or water in it. If it’s an AND day then it will have peanuts AND water. If it’s an OR day then you’re going to have only peanuts OR only water, which means it’s NO LONGER peanut butter if the OR turns out to be water.

And what about the Golden Gaytime Cornetto? Since when does a Golden Gaytime flavour include a thick gluggy chocolate sauce that resembles the cheapest of generic brand chocolate toppings in the mix?

Perhaps not for much longer.

next to a Red-Skin flavoured tub

Another article regarding the name crisis with an interactive poll showing 96% do not support a name change.

Calls to re-brand the iconic icecream the Golden Gaytime is an example of cancel culture going too far, Kar...