What I really miss?

We all know that the retail industry in Australia has been changing over past decades, and this change seems to be accelerating with the import of competition through foreign owned retailers and also the presence of the internet.

Many consumer product manufacturing companies have been taken over and/or disappeared.

Available consumer products have evolved through changes in technology or through change in fashions or customers trends or expectations.

The Choice Magazine also tries to see if there are changes in consumer perspectives over the decades, by reminiscing of Choices from a bygone year to see if in reality the issues facing consumers have changed.

I wonder if there are any products, brands or retailers which no longer exist/available which you miss and you wish were still around to enjoy today.

Let us know if there are any that you miss and what you have done to try to fill the gap.

One of mine is Windsor Farm Mushy Peas. Our family was brought up on mushy peas with fish ad chips, meat pies, sausages or even with meat and two vege (+ mushy peas).

We love the stuff and often bought a tin of Windsor Farm Mushy Peas as a convenient stop gap when the taste for mushy peas arose. Unfortunately around 5 years ago, Windsor Farm or the Cowra canning plant closed. We bought up some additional cans, which lasted a few months, on receipt of this sad news.

Instead of the '‘instant canned mushy peas’, we now make our own using split peas (1 part), chicken stock (three parts) and onion (around 1/2 part). While the homemade recipe is easy, it takes time (2.5-3 hours simmering on a stove) and now we have to plan when we have mushy peas rather than being impulsive.

My late mother loved Crosse & Blackwell’s Anchovy Paste which was made in the UK but it disappeared many years ago. She did not like Peck’s Anchovy paste.

My wife and I loved Callard & Bowser’s Nougat which was also made in the UK and which also disappeared years ago.

However, a Google search has revealed that it is now being made again by Champion & Reeves in the UK so I will investigate further. 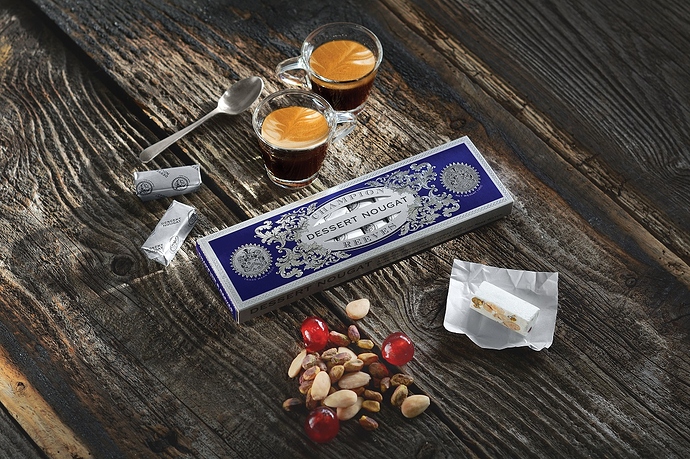 I really miss Sennet’s Ice Cream . My mum use to buy me a Polar Choc on the way home from school on the hot days when I was a little tacker .

I also miss Valmet of Finland Under and Over Shot guns . I always used them for trap and skeet shooting . Bangs for bucks , pardon the pun , they were unbeatable .Valmet stopped producing them to conentrate on miltary rifle contracts .

Recently looking through some old Melbourne newspapers that date from the 1970s, a lot of memories came flooding back.

As you mentioned, so many of the retailers have now, either disappeared or morphed into other brand names. For example, Buckley & Nunn, Ball & Welch, McEwan’s Hardware, GJ Coles variety stores and Coles “'New World” supermarkets. Myers is still with us but it isn’t the same sort of store that it was in the old days. In Sydney there was Farmers (?) and John Martin’s in Adelaide.

Most of goods that were being advertised were either made locally or imported from countries such as Japan, America and England. And the majority of it was very well made, good quality and affordable merchandise in comparison to the total junk that fills the shops these days.

First, looking at men’s clothing… I used to like Whitmont shirts and John Brown made excellent knitwear .

Cars ? My first was a secondhand Valiant - a famous name in the ’ 60s and ’ 70s along with the Dodge Phoenix… both made by Chrysler Australia. The Austin 1800 was also made locally, by British Leyland ? And the legendary Holden Monaro. All long gone now, of course. In fact, the entire Australian car manufacturing industry has shut down

Victoria was the manufacturing centre of the country and I started my working life in retailing in the Melbourne CBD in the ’ 70s. And, as for that side of things…the standard of service has, generally. dropped through the floor these days. Not sure why that’s happened. There seems to have been a major shift in the whole retailing culture and it’s probably one of the main reasons why more people are now , increasingly, buying online.

I really miss the old black telephone on the wall. The one with the rotary dealer. Because the alternative to the smart phone was not essential. Our relationships and how we communicated was so much more dependant on one on one communication.

It related to contact at the shop counters, the hardware store or just organising to go to a party. While today we may have many more ways to communicate and to do so without delay, it seems we have lost some of the qualities that were more important when many of us did not even have a home phone?

And there’s much to be said for contemporary technology. But, I often think back to … even the ’ 90s … we had no internet, no email… few, if any, mobile phones (certainly not until about the mid-’ '90s ?.. we had “pagers” up until that point) … yet we all got through our days quite happily and efficiently.

I don’t suppose there can be any “going back”. However, it seems that a lot of younger people are seriously addicted to all the mobile junk, spending most of the day staring at their smart phones … … walking into power poles, closed doors and on-coming cars …checking to see how many of their fellow digital zombies have responded to the photo of their lunch that they uploaded on to Facebook. If there wasn’t a good enough response… they then feel utterly lousy about themselves… what do they call it " approval addiction"

Choice’s test on toasters. Kambrook WHT120 model was the best and I have found that only one retailer sells it now - The Good Guys - when KMart and Target used to.
I fear Kambrook will soon not be sold in Australia at all.

I miss the disk busy lights on PCs whereby you could make a good guess that something useful was being done, it was off to visit Redmond, or Windows was stuck in an endless process loop.

or Windows was stuck in an endless process loop.

Mine still has a disk busy light. But I think it might just be some one mining bit coin without asking for my per mission.

Something else to miss, the days when hacking a PC actually needed a floppy with a virus on it. The only thing you could catch on line was a big ugly STD (bill that is) because it was all dial up while city folk only needed a local call to connect.

I miss the disk busy lights on PCs whereby you could make a good guess that something useful was being done, it was off to visit Redmond, or Windows was stuck in an endless process loop.

Or the tick of physically big HDDs which served the same purpose. On one ancient machine I could tell what stage of the lengthy boot process it was up to by the grunts and buzzes it made.

This is actually nostalgic nonsense, I don’t know why I said it, the speed and quiet of modern machines is much better. I don’t miss the oddities of PCs of that era at all.

I agree with your point but loathe the fact you want to lump all that on young people. I see a lot of people of all age groups doing that. Notably people on their phone while driving or even refusing to put their phone on hold while talking to me in my workplace. They come from all ages and it’s equally frustrating and borderline dangerous every time.

What I miss is the ability to get an up to date phone that fits in your pocket, has a spot for your headphones and doesn’t cost $1500 or your privacy. I currently have an iPhone SE that fits the bill perfectly but I have no idea what I’ll do when that dies.

Certainly quite a few older people are hooked on the mobile morphine as well. And, in fact, that’s the ultimate embarrassment - that people in my age group aren’t awake up to what’s happening. Obviously, the whole thing is designed to be addictive.

The bottom line is that we simply don’t need to be “instantly updated” in regard to what someone is having for lunch or the “real story behind Donald Trump’s hair” …nor will our lives grind to a halt because we haven’t seen the 957th photo of Kim Karadashian’s backside the minute it’s uploaded to the internet.

People have allowed themselves to be conned into believing that they need to be constantly “connected” all day, every day to an endless deluge of trivia. But, what the hell ? If people want to waste their time staring at all that mind-numbing drivel every five minutes… so be it. Just as long as they don’t do it when they’re driving or manning the shark spotting tower at Bondi beach.

I miss service at service stations. If you are elderly, disabled or car-illiterate it can be very difficult to get someone who will help you with checking oil, water, tyres etc. If you have a problem with your car outside normal hours for specialist businesses, there is no where to go. If you don’t have a car-savvy male around, you are in trouble until the next day!

I miss using DOS on my computer. It was simple and logical. Microsoft makes it much harder to use DOS now. And DOS didn’t keep getting wretched unwanted updates which alway seem to delete or upset something else you are happily using.

AND THERE WERE NO DAMN APPS!!! You didn’t have to buy an app to do things the computer should be able to do anyway. I used to be an expert at using and teaching computers …now I have trouble getting things to work that should be simple and intuitive.

I also miss being able to buy Australian produce and manufacturing…

Welsh rarebit cheese slices, made by Kraft iirc in the early '80s. Absolutely loved them. Haven’t seen them since.

Welsh rarebit cheese slices, made by Kraft iirc in the early '80s.

Foolishness of the day: it was originally “Welsh rabbit” not rarebit. Before the 20th century it was nearly always ‘rabbit’, now ‘rarebit’ is much more popular. Apparently the revision is folk etymology, perhaps aimed at de-confusing people as it contains no meat.

And here I was thinking it was just an accent thing.