Toshiba Warranty Statement - The Good and the hmmmm

The first page of the included warranty statement is below. Of note (in the second column of the first page) is the clearly laid out Consumer Guarantee for Australia, including reference to the Australian Consumer Law. 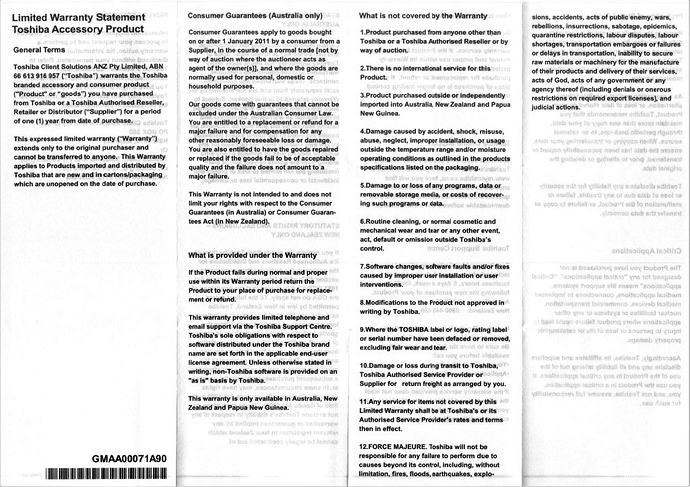 Unfortunately, in the 3rd column there are some doubtful exclusions, such as:

For the sake of completeness, I have included the flip side: 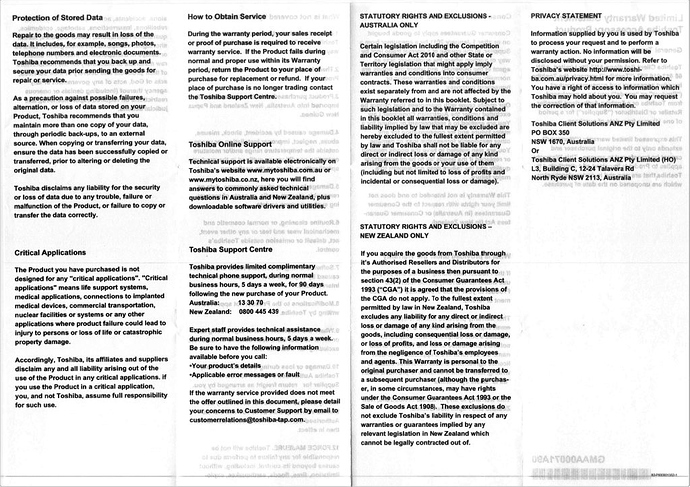 and the back cover: 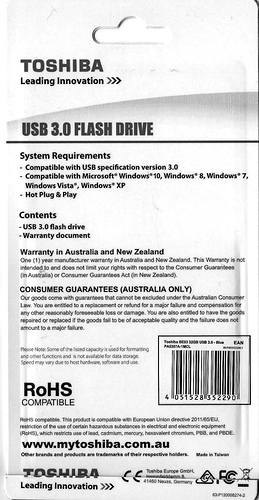 Links are dead. Regardless, Toshiba still needs to comply with Australian Consumer Law. I suspect that scratching its logo off the USB drive would in no wise diminish your rights under the ACL*.

*No, not the anterior cruciate ligament, or the Australian Christian Lobby.

Thanks @postulative. It is showing me that the links are uploading. When I wrote the post, it looked at the bottom of the page as if the pics had finished uploading, but the “Uploading:” statement remained on what appears. Perhaps it will take time to finish uploading due to the abysmal speeds (up and down) we have on our ADSL?

Edit: I reduced the size of the pics, and after many, many tries it has finally worked. Thanks for the heads up.

Putting a retention loop through the hole provided does not remove your rights nor is written consent needed. It is not considered an alteration of the device as it it is not a “permanent change”. Some still provide the little cords in their packaging others just provide the hole so you can customise your choice of loop. The removal of the Toshiba logo by abrasion due to usage would not void warranty nor should the fact you may deliberately do so. However as the object is a copyrighted product the fact that you deliberately altered the product maybe could be seen as a breach of that???

A reality is that in spite of the ACL companies routinely include ridiculous, onerous and unenforceable caveats to the written warranties while noting they cannot diminish customer rights under the ACL.

Why? It is tantamount to bullying or a stand over tactic to dissuade customers from making warranty claims as well as a tool for them to try to push back in the first instance if they are so inclined; eg quoting their warranty until we consumers respond quoting the ACL.

As been posted elsewhere many times, most companies know the ACCC is not going to come after them unless they are well over the top on the breach scale, and they trade accordingly. They know nobody will sue them for violating the ACL for a $25-50 USB but most do the right thing regardless. I have had good or at least OK results quoting the ACL when I have had product or service problems, except for one time when the seller disappeared and the importer did not want to know about it.

The other thing to remember when arguing with companies is that bad publicity is something they generally seek to avoid. I have written letters to ‘da boss’ in several cases which resulted in the right outcomes. This doesn’t always work, at which point I write a public review. At least I can warn people to stay away from that company.

The theory goes that of every person you tell how great a company was, you will tell twenty when the company has messed up. In one case, I told practically everyone I met about how poor a particular company was. Fifteen years on it no longer exists. (That said, in telling my tale I heard others who had even worse experiences with this company.)

at which point I write a public review. At least I can warn people to stay away from that company.

I love Product Review and TripAdvisor.

For information: I put this up to highlight that under the ACL