We just received this calalogue in the letter box. I found it a bit deceptive Here is the front page as an example:. 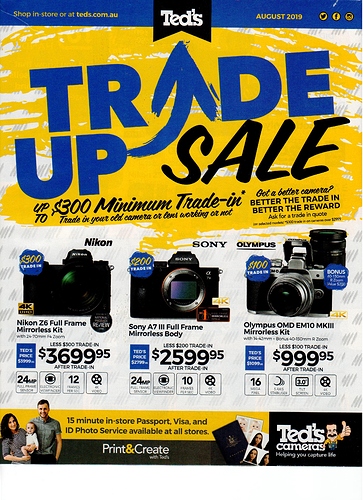 Firstly, it says “up to $300 Minimum Trade-in” but $300 is the Maximum, and if you look to the right under the big SALE word, you may be able to read in the VERY small print, you would have to spend over $2999# to be able to trade something in and depending on the quote.you get you may (possibly) get $300.

Then, note that the prices prominently displayed in large font are AFTER the maximum trade-in. The ‘normal’ price or ‘Ted’s Price’ is in the blue box with much smaller print.

#While this is actually correct, because it stipulates cameras in VERY small print, I found at least one item ( the lens in the bottom right hand corner below) which was originally $3299, but only had a $200 trade-on allowance, so it could mislead. 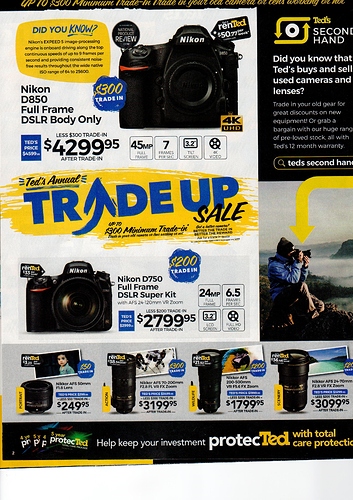 I know this sort of advertising is common, but all up, I just didn’t think the real pricing was very clear or honest.

Dodgy, and confusing even with your helpful explanation.

I think?
The big bold ‘minimum trade in’ suggests without saying it exactly that you will not get less than $100 on a $1,000 camera, $200 on a $2,000 etc. You might even get more for a better camera suggests simply these are minimum values. What ever a better camera is, one that works?

So my old $30 Kodak Box Camera that doesn’t’ work or 110 Minolta will get 10% off. Yes, you do need to read the small print to realise the large format price is the discount price.

Reality!
Are they simply offering a 10% discount on their imagined retail price? Just like a sale, and will take any old camera you have off your hands so you don’t feel guilty putting it in the bin. Which is probably what they will do with it?

“up to $300 minimum” is rubbish. They should be taken out the back and shot.

Even if they said “up to $300” it would still be dodgy - since “up to $300” includes $1 and is essentially a guarantee of absolutely nothing.

I threw that advert away yesterday after looking through it as a curiosity. It reeks of old-school discounting where it is not a discount, it is a trade-in so they can keep their RRP type margins more easily.

I am not a photo buff but do have an ageing mid-level POS zoom camera so had a look and quickly concluded a closer perusal would be a waste of time. I interpreted the ad as sloppy rather than intentionally misleading but in the end with second thoughts I completely agree with your take on it.

I’ve heard Teds is dodgy in other ways too, eg I believe on their site they say they will price match but when it comes down to it, they dont. I have never tried, but others have. I usually buy my camera gear from Camera House or JB, both of which can and do sell at a price other than advertised (less than, I mean). I’d love to be able to trade my no-longer-used-much cameras for something else, but the options in this town are non-existent.

I’ve looked into dealing with ‘Teds’ a few times, ‘the Kogan of camera stores’ ? This advert doesn’t surprise me really, ‘weasel words’ at their finest

thanks for posting it though - worth a mention!

We’ll consider it for a #spot-a-shonky entry

Just like so many Jewellery Stores as an example of using this type of ad hype with the well used line “Up to” some percentage discount. With many times the “Up to” in much finer and or smaller and less colour difference to the background, print. Everyone is aware of the percentage because it is bold, colourful, obvious but the rest is marginalised and just let me add T&Cs apply* see instore for the details (in very very small print with an asterisk).

For some others that use “Up to” And another camera article, this time involving JB HiFi. 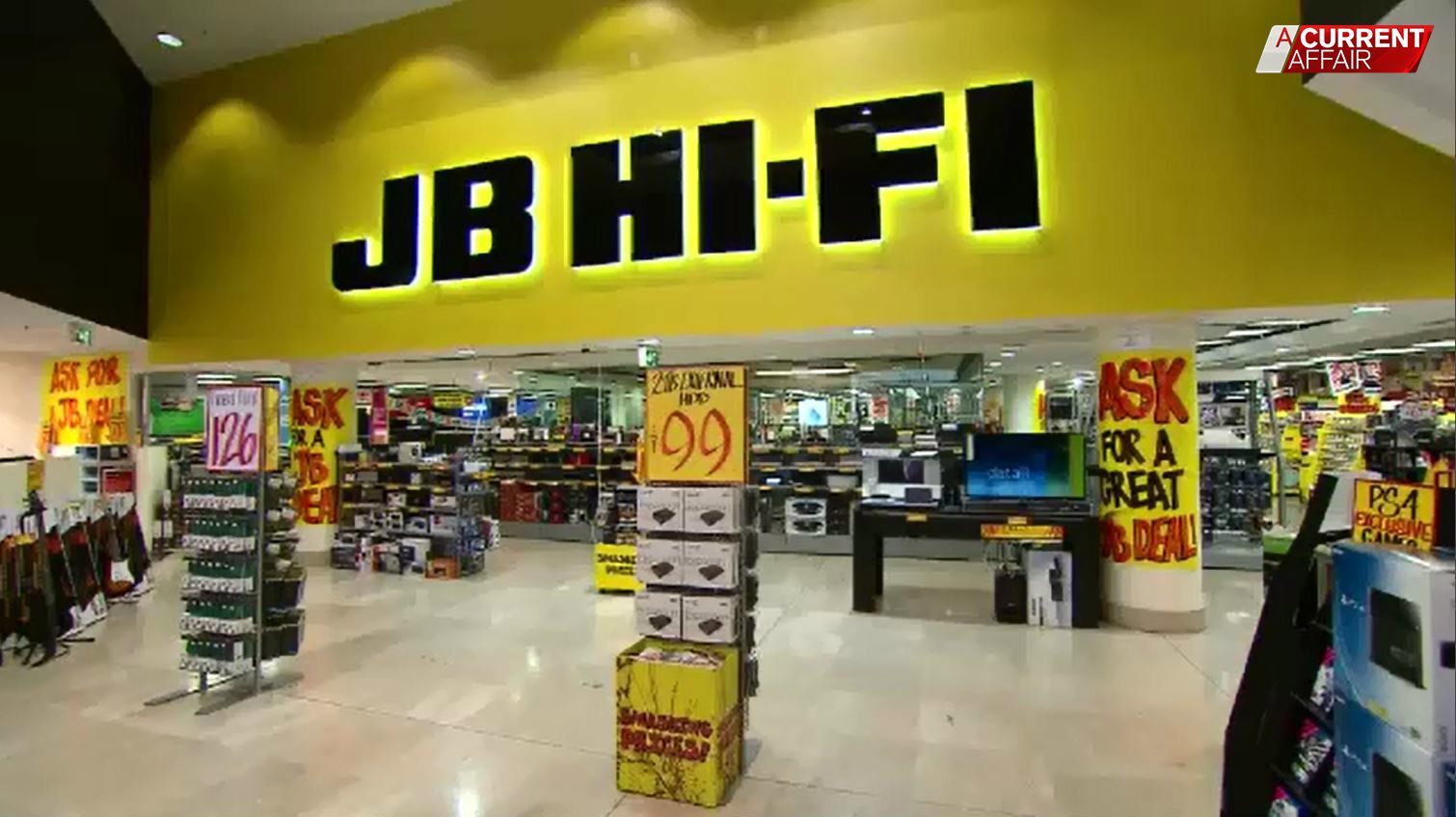 A number of shoppers have been left fuming after they thought they'd picked up a top-of-the-line camera for...

And another camera article, this time involving JB HiFi.

Quite often in newspapers there are price corrections for prices advertised by retailers (esp. in junk mail/marketing materials). I even see Choice in the magazine has in the past also made similar mistakes on product details and pricing.

There are genuine mistakes like this one where business do make mistakes…and then correct them as soon as they can.

It appears that there were a few customers that purchased and picked up the Nikon camera immediately soon after, and before JB Hifi were aware of the mistake.

It is dodgy, but then, it is Ted’s…
Ted’s prices are rarely competitive. You are better off going to online retailers elsewhere. Even the online retailers that have Australian shopfronts (eg Camera Pro, Digi Direct, George’s etc) are usually more competitive than Ted’s. It is a bit like hardly Normal, who will charge whatever they think the poor customer is gullible enough to pay, unless you bargain with them. These sorts of retailers rely on the fact that most people know little about technology.