Whilst trying to fix my computer in March, I read a “technical help article” by a supposed Microsoft VP which claimed that a program called SpeedyFixer would fix my problems.
I paid $90.63 for a lifetime license by PayPal through Click Bank and downloaded and installed the program. After running it, I could no longer access the Control Panel in Windows 10.
After I had finally completed reinstalling all software, I contacted SpeedyFixer and told them their software had not fixed my problem but had in fact damaged my computer, and I requested the refunded as per their stated policy.
A Noah Chen replied, claiming that they would provide a refund but wanted me to try some other things first. I told him I was not interested in trying it further and required a refund. He then tried to offer me additional programs for free, but after over 60 days, no refund has been forthcoming.
I tried to get CBA Card Services to reverse the payment but after 45 days they claimed there was nothing they could do and said to contact the seller or my local consumer affairs.
A Google search for “SpeedyFixer reviews” results in a number of sites with numerous negative reviews with many posters claiming it is a scam. It appears that no one has managed to get a refund, and persons who signed for the trial version and tried to cancel still being charged for the full version.
One website states that SpeedyFixer’s website is hosted in the US but their real location is hidden, whilst McAfee Secure lists an address in Beijing.
You have been warned. Avoid SpeedyFixer and Blue Century Software like the plague.

It appears that SpeedyFixer is not what it may seem to be.

Spybot has the following website about how to remove the software:

The following instructions have been created to help you to get rid of "PU.SpeedyFixer" manually. Use this guide at your own risk; software should... Continue reading →

It appears that it could be malware rather than a useful program. If it malware, doing a program uninstall may not remove all the malicious code installed when the ‘software’ was originally installed. It may be best to look at the above websites to ensure that all traces have been removed.

The company is located in Beijing:

Have you also tried getting your money back through Paypal Buyer Protection?

I would suspect that you won’t get your money back from Blue Century Software Co. Ltd.

Good to give those warnings out to people.That sounded fairly iffy when i started reading that to many red flags.Hope the issue is now sorted for you

Following my post above, I tried to contact ClickBank yesterday morning as they handled the payment to SpeedyFixer.
Their website contact details lists nothing except a US phone number and a chat facility. No email address, no postal address or street address.
I tried the chat facility to request their email address so as to lodge a complaint. I was answered by an individual who refused or failed to provide an email address but wanted to discuss my complaint using the chat facility.
He said that he would contact SpeedyFixer to request a refund and asked me to wait up to 48 hours for a response.
He sent me a copy of the message he sent to SpeedyFixer in which he stated:

“CBCSR : CREATED: 06/08/2018 5:41 PM PDT
Hello Vendor,
This customer is requesting a refund at this time. However, we’re unable to issue the refund(s) because the order(s) is outside your advertised refund period. Any refund issued at this time would need to be authorized by you.

If you are willing to grant this refund, please escalate this ticket by clicking the “Escalate” button and add an appropriate comment.

He again asked me to wait 24 to 48 hours for a reply. Needless to say, it is now more than 48 hours ago and no reply has been forthcoming.

It appears that ClickBank is pretty much identical to SpeedyFixer. Avoid both SpeedyFixer and ClickBank like the plague.

You need to raise the complaint through Paypal, not Clickbank and lodge a dispute (you have up to 180 days to do so after the purchase). You probably need to lodge it on the basis (reason) of the item being “significantly not as described”. You may also like to add detail of how you think it may be fraudulent activity on the part of the seller and the payment portal “ClickBank”. Paypal has Buyer Protection which if you’re successful in your dispute/claim can pay/refund you the cost of the item and postage if you also paid that.

To read more on the process and the link to the Paypal Resolution Centre see the following page from Paypal:

Please also note if you are a Choice member you can use the Choice Help service (https://www.choice.com.au/choice-help-form)

Thanks for your comment. I have done that today but I have zero expectations of ever seeing any of my money again, so the best I can shoot for is to warn other potential victims of these scammers.

Paypal are reasonable in this process, I can say from family/personal experience that depending on your “evidence” eg emails, diary entries of phone calls, item photos and similar they are very likely to side with you if it is substantial in it’s detail ie the more thorough you are in documenting the better your chances. For our family there have not been many cases but so far 100% success.

Further to my previous posts above, I have heard nothing from ClickBank but have had 2 replies from SpeedyFixer after I told them I had posted warnings regarding their scams on review websites.
Whilst I would love to share my email messages to SpeedyFixer with everyone, I would expect that they would not be published but you can probably guess the contents.
However, I can share the reply I received from SpeedyFixer today which I have included below.
If you copy and paste the screenshot into Word, you can expand it to a readable size. It illustrates that at least 17 persons requested a refund in just 6 days.
The text also refutes the claim from ClickBank that all refund requests had to be sent to them.
It appears that this pair of scammers have failed to synchronise their lies.
“Sir,
Please make sure we do provide 60 days money back guarantee，as long as you keep ask us for the refund.
Per the email records,you asked us for refund last time in April and we tried the last time to maintin the order and help you.We also remind you in the email that “if change your mind later, you can refund your order anytime within the 60-day money-back guarantee!”,then you disappeared so we thought you agreed to keep the order.However,you asked us again for refund in June.But as we said,It has been more than two months since you bought our product.so we can’t refund you.
If you like,please see the screenshot: 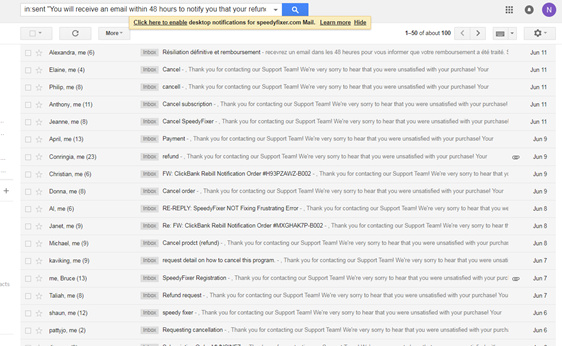 We refund to people everyday as long as in the 60 money-back-guaranteen days.
Besides,if you can’t ask FBI for help,you can ask for policeor your lawyer for help,right?Why don’t you try the legal help?Instead you spread rumors.I’m sorry but this is illegal.
Thanks out of politeness.”

Great news.
After lodging my complaint with PayPal on 11.06.2018, I received a response from ClickBank yesterday advising that they had refunded my money in full, and another response from PayPal today advising they have returned my money back to my credit card.
I had thought that the info I provided to PayPal was for them but they forwarded it to ClickBank.
Perhaps the last sentence prompted ClickBank to change their tune.
“Both SpeedyFixer and ClickBank have numerous negative reviews posted on websites. PayPal should blacklist both of these bunch of crooks.”
As for the useless CBA Card Services, who claimed that after 45 days there was nothing they could do, even failed to provide me with a copy of my email to them in April which I requested last Friday and again today. I lost the email whilst reinstalling my computer.
Oh well. I guess they are probably really busy with more important things like the $700 million money laundering fine, the Banking Royal Commission, and so forth.
Many thanks to the members who posted advice above.

It is great news…pleased you finally received an outcome and refund.

When you raise a dispute with Paypal they contact the seller/payment portal for their response. This is why your contact with Paypal was most likely attached to Paypal’s contact with ClickBank. There are times where Paypal receive no response to the dispute and in these cases they can and do block that Paypal usage and then they refund to the purchaser. I don’t think ClickBank would want to be taken out of the Paypal chain by not responding to Paypal’s contact.

When I checked my CBA Mastercard account online last Friday, the $90.63 credit from PayPal had appeared and it was dated 13.06.2018.
Whilst CBA is able to process all debits instantaneously, all credits take at least 2 days to appear, presumably due to some vested interest on their part.
This morning I received an email from ClickBank advising me that my “Tech support request closed due to inactivity”. This followed 2 other emails advising that if I was not receiving the requested help from the vendor, then I could change the ticket to a refund request.
It appears that the right hand does not know what the left hand is doing at ClickBank.

Great news and well done on persisting with the refund.

I just had a look at the SpeedyFixer scam which appears to still be around.

However, there are no reviews since 2018 so hopefully no one has been scammed recently. 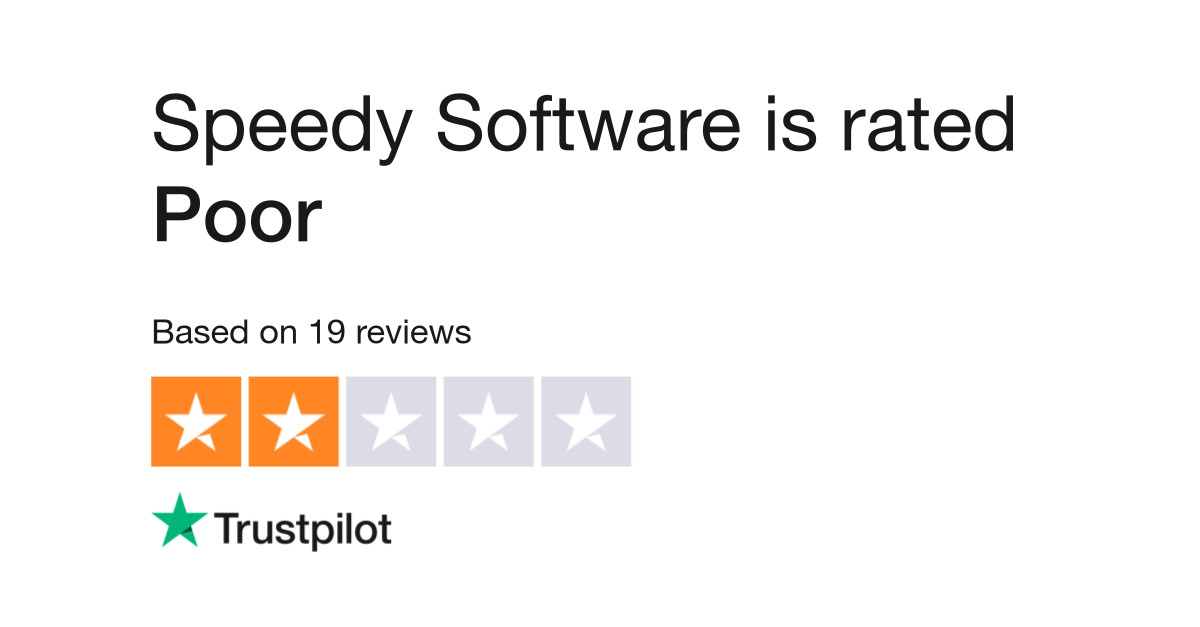 Speedy Software is rated "Poor" with 1.9 / 5 on Trustpilot

Do you agree with Speedy Software's TrustScore? Voice your opinion today and hear what 19 customers have already said. 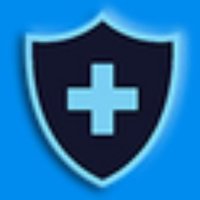 I signed up for one week trial for $5.99. I sent a message back on March 30, 2018 that I did not want the years software help. You cannot get a hold of a live person, even when you want online help. Theres no doubt at all after trying to get a...

Download SpeedyFixer for Windows to fix Windows errors and optimize your system.

“Download.com has removed the direct-download link and offers this page for informational purposes only.” 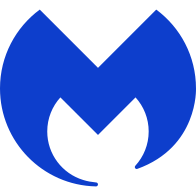 What is SpeedyFixer?The Malwarebytes research team has determined that SpeedyFixer is a "system optimizer". These so-called "system optimizers" use intentional false positives to convince users that their systems have problems. Then they try to sell...

Malwarebytes advises on how to remove it.

Meanwhile, back at SpeedyFixer, aka Scam Central, they continue to spruik this litany of lies.