I recently purchased, on line, a cheap cantilever umbrella. Below are my criticisms. Choice does not have reviews of market umbrellas, but they are sorely needed. I consider these to be a dangerous weapon in high winds as well as not being engineered to fulfill their intended purpose.

I recently purchased, on line, a cheap cantilever umbrella.

What a disaster. Have you considered returning it for a full refund. One of our family purchased one from Bunnings and returned it as too difficult to use in her court yard (stability).

Who was the seller and was there a brand or other details?
Knowing who/what to avoid for now might help others. Surely it is not a universal failing of all cantilever designs?

You could return it under the Australian Consumer Law as being of unacceptable quality. Since you bought it online it might not be as easy as attending your local shop, and the vendor may push back; but if the vendor is an Australia business you should get a refund. If it isn’t you should still get a refund although it could be more difficult. Barring that you could dispute the transaction with your credit card issuer (ACL dispute) assuming you did not purchase with a direct deposit.

If you need guidance on navigating the ACL please let us know.

Choice does not have reviews of market umbrellas, but they are sorely needed.

It seems that many products, ‘cheap market umbrellas’ being among them, can be easily purchased without brand identification, and the same product can be offered with multiple ‘brands’ none of which is a real trade name brand. While I know many consumers who have bought market umbrellas locally having name brands, none has been dissatisfied with their purchase, and for the rest I suggest it would be somewhere between difficult to impossible to publish a meaningful report beyond a buying guide because of the difficulty in identifying a particular product in the market.

I’ll add a tag to your post for request-a-test.

I bought it through Paypal and have taken the issue up with them. The vendor offered replacement parts! They would still be under-engineered for the canopy.
Thanks for the ACL tip. that will be my next move.

They would still be under-engineered for the canopy.

Metals can flex and often designed to allow such do that the frame can take the force applies to it, such as wind in the case of an umbrella. If the mast or structure didn’t have some flex, it is possible under a load that the structure gives way catastrophically. A slightly flexible structure means it will move slightly under load and then return to its original shape when the load is removed. A normal personal umbrella also exhibits such characteristics when wind load is applied to the structure.

In relation to under-engineered, it is very difficult to assess this as a layperson unless one is a qualified metallurgist or structural engineer. While I have some knowledge in both areas, I wouldn’t be placed to pass judgement on the adequacy of the cantilever umbrella structure.

This doesn’t necessarily mean something is not wrong with the umbrella, just that if you decide to take it further, you will need to have proof to substantiate your claims.

Do you have the made and model of the umbrella? Such is useful to determine if there is a pattern of failures with such umbrellas and to also understand better the product you have purchased.

If a metal structure breaks with expected use, then it is clearly under-engineered. The is no need for a metallurgic stress test. Incidentally.it was not the cantilever pole itself that broke but the additional units that were either welded to the pole or attached during the erection of the umbrella. The mosr serious of these is the supposed base of the unbrella.

There was no indication in the advertising that the four-arm cross base needed to be either nailed to a base or that only certain types of weights would work effectively. There was no indication of the diameter of the cantilever pole. The pole diameter is larger than usual. This meant that the granite base I had purchased was too small for the cantilever pole even tbough it was a standard size. In fact, it is difficult to find a suitable weighted base. Whether the cantilever pole itself is flexible or not, I have no idea but it would be difficult to argue that it was the source of the problem.

I maintain that the key problem was a totally inadequate base and that there were no instructions as to how to strengthen the base. two minor problems: (1) a winding handle that fell off and (2) a track for the wire from cantilever to umbrella was also able to be bent by hand.

I purchased the umbrella through Catch.com. It is also sold on Deals Direct, and, I think, eBay

VidalXL has offered to replace the broken parts. This is of no help if new parts are just as flimsy.

A buying guide is essential. It should include knowing the pole diameter before buying extra weights, the weights needed for different umbrellas , the durability of those weights (for and or water-filled ones and the pros and cons of fixing the umbrella in one spot when securing the base to the ground. I, for one prefer to move an umbrella according to the sun.

Thank you for your interest
Diana

Thanks for adding the details. While there may be some discussion on aspects of your opinion on the umbrella, it is clear you are not satisfied with its quality, and as a consumer you are entitled to that opinion.

VidalXL has offered to replace the broken parts. This is of no help if new parts are just as flimsy.

The consumer guarantees are

Under the Australian Consumer Law, when you buy products and services they come with automatic guarantees that they will work and do what you asked for. If you buy something that isn't right, you have consumer rights.

You may also be well served by how the business side interprets it.

Good luck getting it sorted to your satisfaction. Please let us know how it goes.

There was no indication in the advertising that the four-arm cross base needed to be either nailed to a base or that only certain types of weights would work effectively.

Such information is usually in the user manual or installation guide. Did the umbrella come with à manual/guide and what did it say?

If the umbrella was installed (such as using a weight on one supporting member) differently to that outlined by the manufacturer and it failed as a result, it could be seen as misuse under the Australian Consumer Law and potentially a warranty exemption.

If only one member bent, it could be that it was taking the full load rather than being spread over all 4 members. It is likely to be designed such that the load is spread evenly over the four through the manufacturer nominated fixing method.

(1) a winding handle that fell off

What did the manual/guide sat about the handle? Did it need to be bolted or screwed or did it fall off because screws/bolts has loosened through handling/transit?

(2) a track for the wire from cantilever to umbrella was also able to be bent by hand.

Was it bent through use of the handle or through using one’s hands to see if it could be bent? If it was the later it may never have been designed for such treatment.

I am not defending the product but trying to ascertain if the problems is due to doing things in contrary to the manual/guide, rather than the product failing per se. Establishing such will be important in determining your rights under the Australian Consumer Law.

I maintain that the key problem was a totally inadequate base and that there were no instructions as to how to strengthen the base. two minor problems: (1) a winding handle that fell off and (2) a track for the wire from cantilever to umbrella was also able to be bent by hand.

The product description, I’ve highlighted certain points says it is strong, stable and durable as supplied. 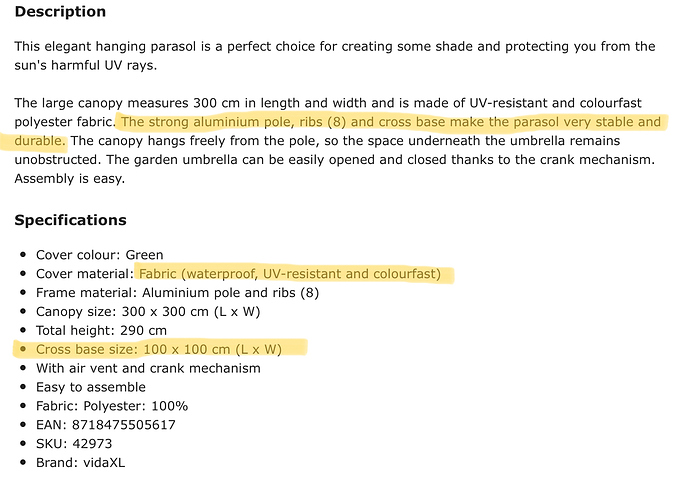 It is obviously intended for out door use. There is no mention of any need to weight, anchor or secure the base in the marketing.

Is it really fit for purpose as a free standing out door cantilever umbrella as supplied?

A suggestion here is that it is not as even the slightest breeze is likely to see it topple (just a guess). The manufacturer is silent on the wind conditions for the design, and there is nothing to suggest it is designed to have a weighted or anchored base. Hence is it most suited to outdoor use in an enclosed court yard when there is no breeze! The marketing says nothing to clarify.

@PhilT has made the suggestion that you might prefer a full refund. Also pointed to the consumer guarantees.

As an aside one of the family purchased a similar product from Bunnings based on price. It was returned as not meeting her performance expectations for a refund. It may be worthwhile looking to the heavier duty designs used by numerous outdoor cafes if you need a regular use umbrella. They offer a guide to what size and weight the construction needs to be for a regular use item. Unfortunately the cost will also be much greater. Too many retailers and online sellers provide products that appeal, priced down to a mass market, only to prove themselves a throw away accessory.