I bought a Samsung Smart TV about 2 years ago. Cost a couple thousand dollars. Cost another thousand for a speaker set.

Today, while doing something else and letting the TV run in the background, a banner message was running along the top of the screen that I just happened to turn around and see.

Samsung is (silently) letting me know that they’ll be forcing ads onto my pre-paid machine and defaulting my consent to invasive monitoring of my usage and viewing habits in order to target them.

I am absolutely furious. It’s disgusting enough that everything is moving to subscription-based model these days, but I bought a bit of hardware. It’s like buying a car and having the dashboard play fast-food ads at every stoplight. Invasive and completely unacceptable.

What can we do? (Besides form a mob and brick every Samsung store in the country?)

We just answer no to the question (which has appeared a few times in the last year) asked by our fairly new Samsung TV about such things, thus avoiding the advertising.

However, we no doubt miss out on some features, but that isn’t an issue, as we only use it to watch TV, and ABC iView and SBS Ondemand are accessed via a computer with HDMI cable to the TV, thus avoiding the horrible interface on the TV.

I think there is a thread somewhere where such things have been covered.

Mine didn’t give ‘yes or no’ - it gave ‘by not going into your settings and changing this, you consent’.

Also, based on the wording I found in the settings, you can’t opt-out of the ads. Only the tracking aspect.

Thinking about this a bit more- we didn’t engage with the yes or no question at all, just used the back button to exit to a previous screen.

you can’t opt-out of the ads

We somehow managed it, as we don’t see any of their ads, but perhaps the ads only show up if any of the non-free to air TV features are used?

This video also shows how… 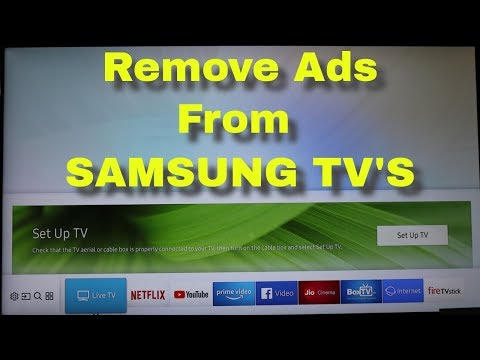 Unfortunately consumers are becoming the product, and this is another example.

Colour me totally unsurprised. I saw something a while ago that said we see on average 50 times more advertising per day than someone in the 1950s - although I may be misremembering or the figure may be somewhat inflated. That isn’t just TV; it’s the branding on your pair of shorts (Back to the Future reference), it’s the big colourful label on that bottle of cola, it’s the badge on your car!

Pay TV started off as one way of avoiding ads, but my understanding is that you can’t even pay for them to go away now (happy to be corrected on this). SBS - a public broadcaster - has advertising!

Then of course there’s product placement - and The Truman Show definitely got that right. (Can’t escape Starbucks even when watching Game of Thrones.)

So yes, the expectation today is that you buy something and then see endless ads for more of it. You go to The Good Norman, buy something, and get asked for your phone number so they can keep selling stuff to you. We have become the product, with our personal details being sold on to companies we have never even heard of so that some company somewhere can advertise ‘stuff’ to us.

What can we do?

What can we do?

I’ve considered very seriously when the time comes, buying a computer monitor of very high quality, with lots of HDMI ports (and others as required) and just plugging in my FetchTV box instead. My 12 year old Samsung is still going strong.

We bought a Hisense TV a month ago. It doesn’t use Google! Google has only one purpose: farming consumers for advertisers, for which it is well rewarded. I keep well away from the monster.

It doesn’t use Google!

A few manufacturers are perservering with their own TV operating systems, Hisense being one. A business reality is that continuing to roll one’s own can be a competitive advantage while being a business disadvantage.

It costs to have software engineers doing the code, some keeping abreast of evolving standards, and more managing the apps providers for compatibility/updating.

Using mainframe computers as an example, once upon a time every manufacturer had their own proprietary OS. The costs in development and support, and customer training became unsustainable and over decades linux is ubiquitous. Even WIndows has some linux in it as do most network devices and so on.

Similarly an off the shelf TV OS like AndroidTV has overwhelming appeal as business proposition since it limits the amount of in-house support. Depending on ones age the monster may rear its head. One can minimise the ‘googleness’ of Android TV but for a large segment of consumers there comes a point where convenience and 'opportunities ‘to do and watch’ as well as have the apps supported longer because of critical mass in the market will probably win.

There may be a disruption such as a particular government deciding Android cannot be licensed to certain companies in certain countries, so those companies will be forced to roll their own, and their own might be good enough to rival or supplant AndroidTV or even google. A new ‘monster’.

It will be interesting to watch.

Weird. I was sure the Hisense TV OS was android. Happy to be wrong about that!

. I was sure the Hisense TV OS was android What is VIDAA U? - Hisense Australia

Do you have a new Hisense Smart TV which displays the term, VIDAA U when you start it up? Here’s what it means.

as well as AndroidTV models

Similarly I glanced down at my Fitbit the other day to be presented with an ad for Spotify. Just livid! Thankfully it was easy to Google how to turn that off.

Thankfully it was easy to Google how to turn that off.

Ironic one must turn to google to turn of advertising, eh?

Yeah - that wasn’t lost on me. I hope Fitbit reads “most asked” on Google. I’m currently mentally composing the tweet to them. Unfortunately the medium they take notice of.

You do realise that google bought fitbit? Thats why I no longer use it.

No I did not know that. I’m not quite to the point where I will bin my expensive tracker (ew - that’s suddenly worse).

I stll have a couple of old ones in a drawer, but sold my Blaze as soon as th press release came out. Stll have the scales but dont use them. May have to change that, I dont have to log in, i guess.

I bought a Samsung Smart TV just over a year ago and read the terms and conditions. What they said - in the 7 pages of small print - was that to use most of the features of the TV, I would have to agree to Samsung collecting data about my viewing habits, agree to them finding further information about me on the web to create a profile of me, storing that data overseas where the privacy regulations are not as strict as those in Australia (they were willing to admit that) and selling the information about me to to other companies (they called them their business partners). I had long exchanges with Samsung telling them that none of this was made clear in their information about the TV. I was not told about this before I bought the TV. First they were engaging but then they just didn’t care. I didn’t accept the terms and conditions. I just used the ordinary TV and the recording function and ABC Iview and SBS On Demand through the web function, rather than through the apps (I needed to agree to the terms and conditions to use the apps). But even those had problems. So I bought a mini-desktop and connected it to the TV and now either I watch live programs or I use the TV as a screen, bypassing Samsung. Of course Samsung blasts me with a notice every time I turn the TV on telling me to set up the TV. I’m guessing this is my last Samsung product.