Hello Choice Community
A few months ago I was researching rat bait safe for birds and pets. Discovered Talon make a “Ratsak Naturals” contacted Supermarket chains asking why not on shelves, explaining why important. Their response- they have the ‘right’ to chose other rat baits to sell!
Grrrr I followed up expressing my disappointment at their disregard for native wildlife etc No response! 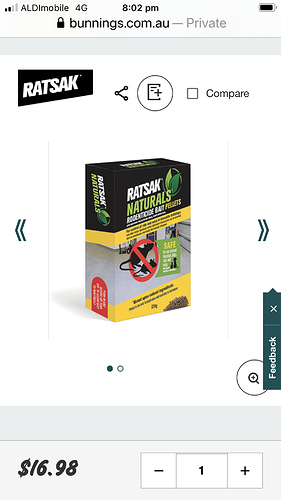 image1125×2001 245 KB
Please suggest that if need shortcut to kill rats - as we do when see vermin - use only this one - ask supermarket to get it in or see if Bunnings May stock it.
I’m also experimenting with peanut butter and baking powder balls … Not sure if this would have any secondary animal impact - Love you to ask a scientist

A few months ago I was researching rat bait safe for birds and pets.

I have been looking it them as well for use around the yard (our nut trees attract things which like to eat them). There are three categories of rat baits two are explained here:

and the third is based on salt (which you have highlighted above).

Those based on salt seem to have mixed anecdotal evidence on their effectiveness.

Their response- they have the ‘right’ to chose other rat baits to sell!

Consumers also have a right to buy baits elsewhere. If say the brodifacoum ones don’t sell, they will most likely not continue to stock them.

I’d not use any rat bait, if at all possible. 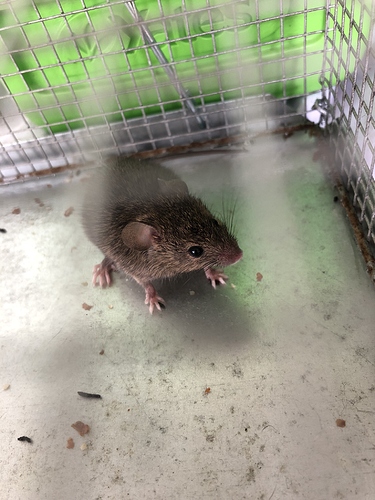 image1536×2048 743 KB
Whether we live in a highly urbanised environment or more rural the baits can pass into the food chain and harm other species, mostly native animals. Best avoided.

There are a number of non harmful traps that readily capture rats and mice. I use almonds and peanut butter as an incentive. Bunnings, the local hardware or rural supplies store.

Let the local wildlife service, council, or Vet sort out the captives.

EG two I have used. Try our Multi Catch Rat Trap, Humane, effective and extremely tough. Pestrol is your one stop online shop for all Rodent Control products!

We’re rural, so the best control is the Python/s that live in the roof. However if the mice appear inside the house, it’s best to evict them ASAP, before the Python follows them in.

I can second the cage traps. When I used to live more rural we had one where you’d hang peanut butter on bread in the middle of it, and a door at front would drop closed once they’d moved the bread. Easy to then drown them if rats. Once season caught maybe 100.

You can also get a smaller plastic tilt-close-tunnel that works the same way.

I can second the cage traps.
…
Once season caught maybe 100.

Sadly this is not practical when the rodents are in their millions.

I didn’t think of native mice in the burbs. Just the idea of taking a cage of rats anywhere makes me squeamish. I can’t imagine the council being pleased to receive them either. How would they dispose of the rats?

I didn’t think of native mice in the burbs.

It’s a worthwhile consideration where there is bushland nearby or lots of large urban backyards and gardens.
.
Our native species of all sorts including native rats and snakes are protected species. With some exceptions, the natives can be found along side introduced species. Hard to tell apart without getting up close and personal.

Just the idea of taking a cage of rats anywhere makes me squeamish.

It’s understandable. Blame Hollywood or our parents for our phobias. Mine is large barking dogs with drool dripping from their fangs.

P.S.
We had pet mice as kids, which solved that one.

Sadly this is not practical when the rodents are in their millions.

Does it depend on the size of the trap/s?
Note the OP seemed to be more of a domestic need.

As much as there is real pain for the residents where there are population outbreaks of mice, it’s a cyclic event, predictable as conditions enable. There’s been a decade since the last one. Time to be better prepared, with less nuclear solutions than broad application of highly toxic baits into the food chain.

I’ve got a minor problem with mice, as I feed native birds in my back yard. I read the supermarket baits cause enormous pain to poor mice, it is why I do not want to use them, and looking for alternatives! Thanks for posting!

Those cage traps - are they the same as cat traps?

I don’t know never having the desire to trap a cat. The rodent traps are various enclosure designs that allow them in when attracted by the (harmless) bait such as peanut butter, but don’t let them out. You can catch several in the same trap overnight. You are then left with the problem of dispatching live rodents which is easier for some than others. I suppose you could take them for a drive and release them but this seems time consuming not to mention a little unfair on the neighbours. The one I have works well sometimes but not always but the same goes for poison baits.

Rats in particular are quite clever and can learn to avoid trouble. As cunning as an outhouse rat as they say. I know they are a serious pest that costs us much in damaged goods, loss of food and health problems but I cannot help admire such successful and versatile creatures. Tame rats are sweet and friendly.

Those cage traps - are they the same as cat traps?

No. The larger possum/cat/wild dog etc traps typically use a drop door and trigger plate or mechanism. Various sizes.

All non lethal traps need daily checking or more often.
The benefit is that you get the opportunity to release any native and other non pest animals alive. Eg the neighbours’s pet Terrier or favourite Persian. Heat, stress and a lack of water are a slow death.

P.S.
We’ve a Feral cat problem, along with the occasional fox and wild dog.

For rats and mice (less of a concern) we get the best results placing traps up against the skirting boards. Somewhere that is not exposed or open and where they are often observed running to or from. Curiosity, the scent of food and the fact the trap is in their path all help. If there are lots of other food sources around any trap will be less likely to work. The same logic works for the more lethal versions.

Better none?
Considering what else is in the food chain the bait toxins are passing through, Wedge-tails are several steps removed from the mice and rats. Whether native or the more recent immigrants. A long-term study finds high levels of rat poison in wedge-tailed eagles, suggesting that the toxins are having a broad impact on the food chain.

A close friend bought this product the other day as she was having problems with rats and has a miniature schnauzer.

Unfortunately, her dog managed to consume some of this product, and they ended up at the vet hospital with the dog going into kidney/liver failure. She was lucky, if she had waited any longer her dog wouldn’t have survived the night.

The vet informed her that they’ve seen this with multiple dogs already, who weren’t as lucky and didn’t survive this poison.

She called me immediately to warn me not to use it as I also have 2 dogs.

I believe it’s all around the best option to use traps over poison.

Unfortunately, her dog managed to consume some of this product

Thanks CaelanRose, sorry for your friend’s dog.

I believe it’s all around the best option to use traps over poison.

I’ve had good success with traps for rats and mice. The non lethal traps also avoid the risk of your pet accidentally setting them off or being injured.

EG two I have used.

Ratsak Naturals is available from Bunnings
It. Is completely safe for our wildlife and pets,
Supermarkets won’t stock it they are happy to keep killing native birds!
Join the campaign to ban anticoagulant rodenticide baits
Bird life Australia!!!

Ratsak Naturals is available from Bunnings

Welcome to the community @Joseph1

It. Is completely safe for our wildlife and pets,

I’ve not been able to find absolute evidence this is correct. Australia has a number of native rodent rats and mice, (IE native wildlife) as well as immigrant pest species. The APVMA had approved the product, but they also approved the highly toxic to wildlife and humans anticoagulant rat baits sold under the Ratsak and other brands.

Does the product affect small marsupials?
Advice on use of the product is that it should not be used indiscriminately. It would be reassuring if the USA? developed product has been properly assessed for risks to all Australian wildlife.

The Native rodent population are highly unlikely
to consumer RATSAK NATURALS.
Why? because they are nearly all carnivores/insectivores.
There are only small populations which are herbivores and they are primarily found in far north QLD.
Further to this native rats/mice are very rarely seen in populated areas or farming communities.
I have spent many years studying native marsupials.

The Native rodent population are highly unlikely
to consumer RATSAK NATURALS.
Why? because they are nearly all carnivores/insectivores.

What about the native bush rat?
They are omnivores. I’ve trapped (live trapping) numerous examples on our property in the Glass House Mountains. They are partial to almonds and peanut paste. We’ve nearby residential acreages, farms, forestry and creek side areas.

The bush rat or Australian bush rat (Rattus fuscipes) is a small Australian nocturnal animal. It is an omnivore and one of the most common indigenous species of rat on the continent, found in many heathland areas of Victoria and New South Wales. The description of the species by G. R. Waterhouse was published in the second part of the series Zoology of the Voyage of H.M.S. Beagle, edited by Charles Darwin. The species was assigned to the genus Mus, a once broader classification, and later pl...