RRP, Discount, and the Price

From kitchendiscounts web site. Save $60 and shipping is extra. 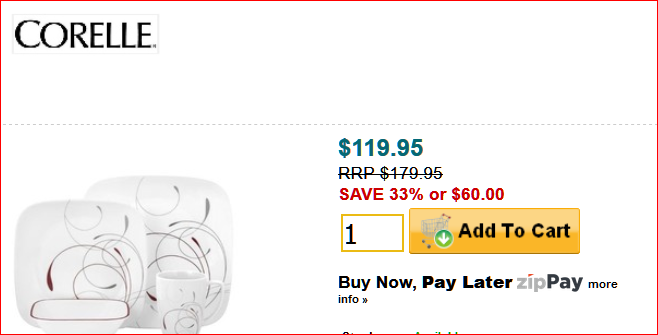 From the [WorldKitchen website ] (https://www.worldkitchen.com.au/1101053.html#q=splendor&start=13) you don’t save anything. I believe WK own the brand and are thus the importer, so their pricing might reasonably be the RRP.

Big W has it on offer at $89.00 that reflects WK’s pricing. An aside, as usual we get a bit of ‘special Australia tax’ compared to US shop prices

Shops are certainly free to set their own pricing, but when a reference is made to an RRP rather than ‘our regular price’, and a related discount is claimed from RRP, it is a specific claim open to scrutiny. How does one get to their $179.95 RRP?

I made a submission to the ACCC regarding possible misleading prices. My expectations regarding that submission are realistic

It reminds me of the rug sellers who always seem to have things on sale with heavily discounted RRP, but the same rugs are never sold at the RRP which makes the RRP worthless information.

I also suppose the important message is to shop around.

It would also be interesting to know who sets the RRP. If Kitchen Discounts usually sells the set for $179, then possibly the RRP would be $179 in that particular store…and they may be right in saying that their RRP is discounted as shown.

If the RRP is set by the manufacturer (this could be problematic as it could be seen as collusion/anticompetitie), then it would be strange why different retailers have standard prices quite different to one another.

I think that argument depends on what RRP means. Recommended Retail Price is one recommended (not mandated) by the manufacturer or importer.

If Kitchen Discounts usually sells the set for $179, then possibly the RRP would be $179 in that particular store.

Would that not make it their ‘regular selling price’ not an RRP?

If the RRP is set by the manufacturer (this could be problematic as it could be seen as collusion/anticompetitie), then it would be strange why different retailers have standard prices quite different to one another.

RRP is a universal term for the manufacturer’s recommended price, not a mandated price because of retail price maintenance laws. It is rare to pay full RRP in this day and age, and should be even rarer to pay significantly more than RRP in any market.

Since business would probably prefer to get as close to RRP as possible it defies common sense that the importer would be undermining an RRP (supplied from wherever) by almost 50%, would it not? If a shop did that it would be their prerogative, but cutting the profit from underneath your resellers?

It could be World Kitchen is not the importer per se, but I have not been able to find any evidence they are not. A few years back we had a problem with another of their brands and every exchange reflected them being the importer. It could be there is another importer selling in parallel, but have a look at what World Kitchen is.

Corelle Brands, LLC is an American kitchenware products maker and distributor based in Rosemont, Illinois. The company began as the Corning Consumer Products Company, a division of glassmaker Corning, and was also known as "World Kitchen" from 2000 until 2018. The company began as an unincorporated consumer products division of Corning, Inc. in 1915 with the invention of heat-resistant glass bakeware sold under the Pyrex brand. It was incorporated as the Corning Consumer Products Company (CCPC) ...

edit-> if you go to corelle.com it takes you to worldkitchens. Need more be said about where they sit in the product chain?