The Baby Boomers need our help. On the cusp of - or amidst- retirement and with the weight of their Millennial and Gen Y children soaking up their life savings this generation are looking at options to downsize, capitalise and vitalise their living options in a very expensive era.

So-called ‘retirement villages’ are an option very popular in Australia and the USA, where people may obtain smaller residences. After looking for a relative this year though, these residences are often priced well-above the prices for suburban homes and come with expensive living inclusions for amenities, security, health care and transportation. Added to this are the legal inclusions that come with provisions for the retirement village corporate provider, placing caveats on family homes and the probability of hidden pricing on critical products for these residents that preclude them from selling-on their retirement villas, units, apartments and other housing types.

I’m interested to know whether there are consumer advocates in place to assist older people with the planning, examination of the legal situations for chosen destinations and the ongoing living costs that might not always be clear from the advertising speil. A rudimentary internet search uncovers stories of people being fleeced of their life’s savings, of health care concerns and families unable to recover the family’s birthright home or freely sell the retirement home they have purchased after that residence isn’t required any more.

5 Likes
Retirement Village contracts should be standardised federally
How much money do you need to retire - your thoughts?
BrendanMays 21 September 2016 00:59 #2

Hi @gsmithpill, you might find our articles on choosing aged care and retirement village contracts of interest. In addition you might find the My Aged Care is a useful resource. Let us know if you have any experience using these services or further questions.

NSW Fair Trading has identified fees and charges for retirement village living to be a severe problem area and I believe they are looking into providing tools that hopefully will provide consumers more transparency when making decisions about whether to move into a retirement village, and which one, etc.

For now, what can be said is that retirement village living should not be seen as an investment option. At best, it is a lifestyle option, because of the community set up. It is significantly different from downsizing by purchasing a unit that is smaller than what you currently own because generally speaking, in addition to the lump sum you pay at the start, you will have to pay significant ongoing fees and share the capital gains with the village operator when it is is time to move out.

My biggest concern is for friends who have sold up and moved to retirement villages on the glossy sales pitch, if after a while they decide that village life is not for them, is that the terms of their subsequent villa sales are so onerously in favour of the operator that most of them don’t have enough capital behind them and therefore cannot afford to move out and buy a regular house again.
My advice to anyone considering it is think carefully as the capital growth is largely harvested by the operator and the management/maintenance fees are as onerous as council rates.

Somewhat reminds me of the dodgy super plans with ordinary performance and huge exit fees to escape a bad investment, that used to be the norm. Seems government, despite all evidence to the contrary, remains of the opinion private enterprise can be trusted, no oversights needed […to put as many dollars in their pockets as possible]. What you have described is modern capitalism at its finest where they target a generally vulnerable group for max profits to the business/developer and no protections to the consumer beyond caveat emptor.

There are alternatives to retirement villages, and they are becoming more popular overseas… 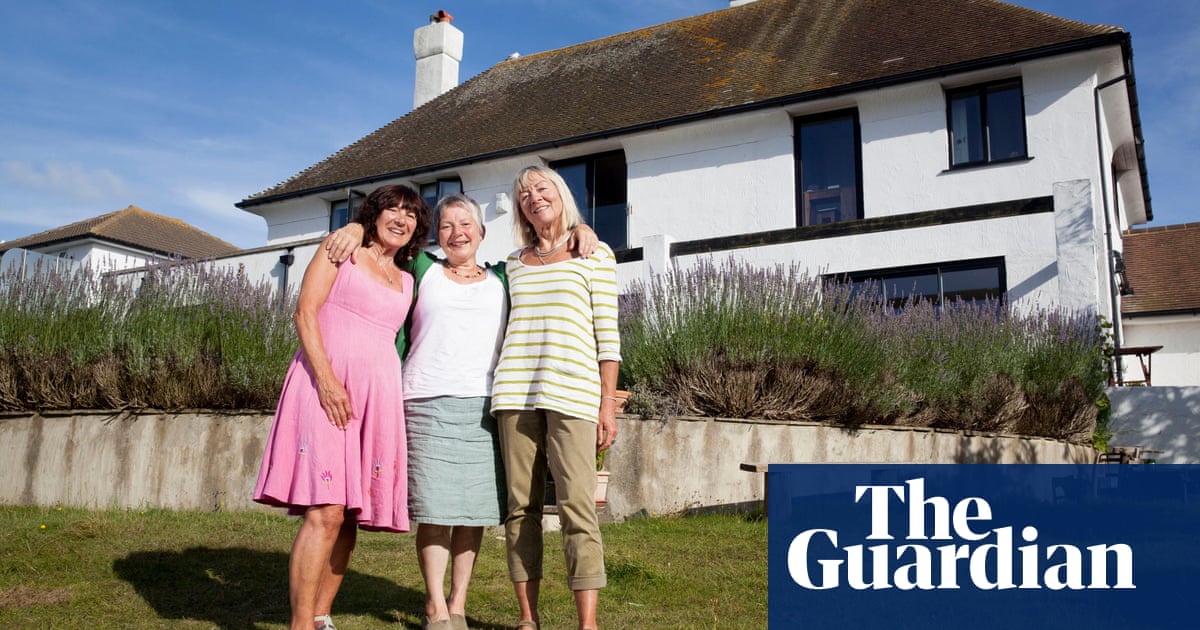 Old friends, new way of life – why we bought a house and moved in together

After seven years of living on her own, Andrea Hargreaves has moved in with two friends at the same stage in life. Each woman sold her home and sunk her savings into a new one big enough for communal living. But what did their families say?

The current options for retirement are rather uninspiring—stay at home or go to an aged care facility. Pioneering groups of architects, the elderly and social scientists are looking at creative alternatives, however. Life Matters investigates.

If you live in Victoria, the Residents of Retirements Villages (RRVV) has a website which sets out various factors concerning living in retirement villages. Other States have similar associations. At the moment there is an Inquiry into Retirement Housing being conducted - see the Victorian Parliament website- Legal and Social Issues Committee. There are numerous submissions to read there from various retirement village residents. It helps if the village is well run and the residents are happy with the management and the way problems are resolved.

My husband and I moved into a retirement village some years ago due to his serious health condition and my health problems. This is the main reason, according to research, that people move into retirement villages - downsize to a smaller unit due to declining physical ability to maintain the large former family home. The concept is a good one with social activities and village facilities to combat social isolation.

It is certainly not a situation which results in a good financial outcome when the resident’s unit needs to be sold when they leave the village due to death, need for permanent residential care or wish to live somewhere else due to the Deferred Management Fees, refurbishment fees, selling fees and sometimes loss of capital gain. So choose carefully and do plenty of research about the subject.

Vic government is currently Sep -Nov 2016 holding an enquiry into the retirement housing sector.
I am watching with interest to the outcome.
http://www.parliament.vic.gov.au/lsic/article/2971

It appears that the elderly are nothing but profit fodder to at least one major provider.

Residents in the nation's retirement villages are left vulnerable to exploitation by a hotchpotch of legislation and underfunded consumer affairs bodies.

The fact that AVEO doubled to it’s profit in ayear speaks volumes.

The pollies are busy giving a lot of lip service to the scandalous treatment of people living in retirement village as identified by the Fairfax/Four Corners investigation, but I suspect that not much will be actually done to fix the problems.

Lots of smoke and mirrors will be gesticulated by them appearing to act but ‘I wouldn’t bet the farm’ on any real reform.

It would be interesting to know whether the companies or their related parties at the centre of this scandal like AVEO make donations to the major political parties? I wouldn’t be surprised to learn that they did it seems to be business trick 101 amongst ‘rent seekers’.

Another interesting article on alternative options:

Co-housing works well for older people, once they get past the image problem

Older Australians are keenly aware of the housing challenges they face, but most are wary of co-housing due to the negative associations of shared living spaces.

NSW appears to have taken some steps to raise the industry’s game.

Just watched Lateline after 4corners program. Executive Officer of Australia Retirement Living Organisation is Clearly in the pocket of AVEO and other retirement organizations. How can he justify his role? he is advocating For the property gougers and NOT supporting Any of the retirement living residents.
Rubbish about cheaper property prices, and exit fees and consistently increased "maintenance’ costs. The contracts are intentionally undecipherable. Also many residents are so intimidated by management they are afraid to be honest on the ‘feedback forms’ for fear of reprisal.
Ben Myers should resign - he has no conscience.
This sector needs a huge shake up - and as this organisation is is not advocating for the vulnerable it must change from the top down or close completely.
Can CHOICE become involved in supporting the residents of retirement villages being exploited by AVEO / Freedom / other for all profit organisations.

Hi @Wend, There is commentary about this topic at

Thanks BBG
I read the previous posts from September 16. Hoping that now 4corners and Lateline have exposed AVEO’s intentional rip off practices more action on all levels will be taken. Appreciate Choice offering information on alternatives.
cheers

I am currently in the US , and saw the Aveo rip off highlights on the ABC news webpage.
My late Parents lived in an Aveo village in Qld which they bought off the plan many years ago. My Father died 20 years ago, and in the next 15, I watched the service decline, the Residents treated as nuiscances, and the costs escalate astonishingly.
It reached a point where there was no onsite Manager… an appalling thing for a ‘Retirement Village’, which promised the earth, but in fact delivered nothing.
When I went to sell the Unit the costs quoted were so outrageous that I was speechless.
I cant say anything absolutely libellous on this page, but am more than happy to privately discuss.
It cost around 50’000 to refurbish, then outrageous ‘Advertising Costs’, which I queried as all the advertising was done via Aveo, then an outrageous exit fee of approx 100’000.
I have not one fond memory of Aveo and would rather set myself alight and go down a river than ever step foot in one of their Villages.

We’ve put together this advice to help consumers navigate the advantages and disadvantages of retirement homes. Let us know what you think.

I feel your pain and share your angst Sandra. My late mum bought a unit 16 years ago, I was overseas. Apparently legal advice was sought but the contract too complicated for anyone to understand and mum was told ‘all retirement villages have the same arrangements’

Everyone at AVEO “Cherry Tree” had to pay the complete unit fee $350,00.00 +? before moving in, plus other costs. (could have purchased a home twice the size in this area for less than $250,000 at the time) Then there were quarterly fees $700? (management, community hall, bus?) plus fortnightly fees (gardens, bin collection) $200?
Whenever there was a residents meeting it seemed it was about an increase in fees and NoOne Dared to say anything. Everyone knew there would be trouble for anyone who spoke up. The increase in fees were said to cover expenses such as costs of expansion and developing new units!

No investment gains were passed on, After the unit was sold and costs of $100,000 or : 25% were deducted we inherited less than $300,000. While house prices in Melbourne soared AVEO made huge profits but the value of her property to us was worth $50,000 less than she paid for it 9 years earlier! Mum paid about $35,000 a year on top of her home purchase to live in AVEO plus utilities and council rates. I think she and a friend could have spent their time living on a cruise ship sailing around the world in style and with all costs included for about the same costs as buying into and paying fees to AVEO.

AVEO is arranged for outright and blatant exploitation. There needs to be urgent overhaul of ‘retirement village’ costs and fees. I would love there to be a class action against AVEO for 1. Making contracts deliberately obtuse, therefore misleading potential residents about costs. 2. Constantly and unjustifiably increasing costs while not passing on capital gains and now apparently expecting residents to cover any capital losses! 3. Not providing services and support as paid for.

Fair Go AVEO. It seems the owner has as much honour as his father and will also end up in jail.