A couple of my colleagues and I are conducting research on people’s thoughts of climate change. It is a short online survey that should take about 10 minutes to complete, plus you get to watch a short video produced by one of my colleagues! Seeing as CHOICE Community holds a wide range of people with various backgrounds and opinions, I think it’d be valuable to have your view on these things.

We would love it if you could spare 15 minutes of your time to contribute to the ever-expanding body of knowledge that helps us progress as a civilisation. Here’s the link: online survey

Hope it all goes well @natural.thought.

Done.
Fun questions.
One observation - slider bar answers defaulted to opposite ends for the two I remember, and I wondered if they were preferred answers. Slider bars should default to middle/moderate answer, not one of the extremes.

One observation - slider bar answers defaulted to opposite ends for the two I remember,

Just had another look through: 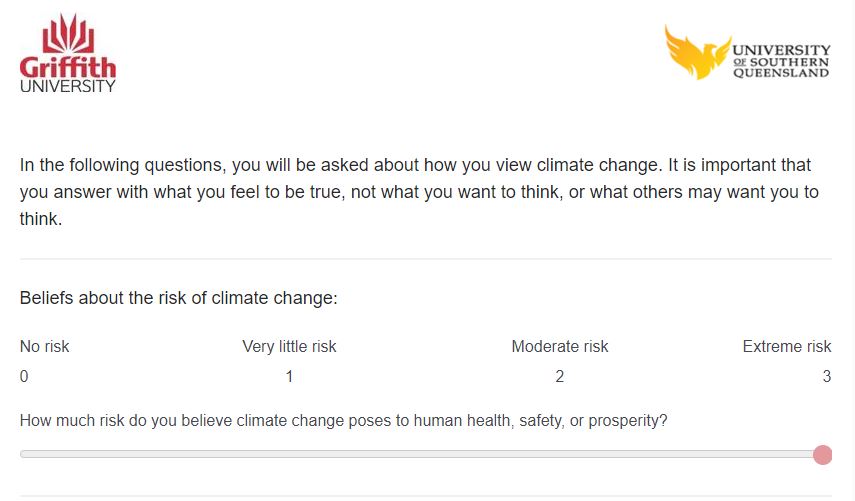 So if I accept the defaults, I am a socialist who thinks climate change is a huge risk.

Also not sure why my political views have 6 levels of left to right, but my climate change risk assessment goes straight from moderate to extreme - there’s not even a high risk before extreme. I’d have thought it would be more like no risk, minimal risk, moderate risk, high risk, extreme risk - defaulting to moderate. Same default for political - but political ignores the politically agnostic option too … the ‘don’t care’ segment who draw a picture of their private parts on the voting form (yes I’ve counted votes in elections, yes people do this - some are really good at it!).

Just some feedback from a cynic

I’m just getting back to the survey, I had to pause some hours ago after the initial sciency questions, due to having urgent stuff to attend to here.

Yes - that should probably be included as well

certainly it needs more than 4 levels …

am I up to 20 characters yet

I think we have enough characters in the ‘CD’ group so we should be exempted from that, but.

Hi @draughtrider, thank you so much for your valuable feedback! Unfortunately, I didn’t catch the slider slip-up until after I had published the survey - and I couldn’t make changes once it was published. This is my first time using this survey platform so there were quite a few kinks to work out, and obviously a couple more to take note of next time! I assumed the slider would appear as default/neutral for participants, but I guess I was wrong! Thanks again

I was advised to have only the four chronological options for assessing risk and three options either way for political identity (a Likert scale), but I will review this decision in future research. I should have included the don’t care option! As a previous vote-counter myself, I’ve seen the range of genetalia, poems, and expletives employed by the politically agnostic (nice term!).

Thanks again for participating

Thanks @gordon! The survey is set-up to be able to leave and come back as you need; it saves your responses as a draft. I’m glad that worked out for you

Hi @natural.thought, a few more suggestions for next time.

‘not working’ is not the same as ‘retired’ and ‘retired’ was missing.

some statements for agreement are in the negative, eg do I believe that ‘scientists don’t believe’. I had to read them a few times to be sure what the sentences meant as phrased. Perhaps I was thinking too much

Hahaha thanks @PhilT! Some of the questions were negatively framed to try and remove any habitually clicked responses, but I’ll keep that confusion in mind in future.

Thanks for letting me know about the difference between retired and not working. For the purposes of this research, that distinction was not as important as some other distinctions that were made, but your feedback will definitely be helpful in explaining the limits of the study. Thanks again!

Total waste of time in Australia
WHY?
Because of the pathetic information being given to people.

Good, scientifically based information is available, you just have to search it out, and ignore what the Murdoch media broadcasts, and also, sadly, some of what comes out of the ABC of late too.

I started this survey in good faith but quickly terminated it in disgust. It typifies the attitude of left leaning taxpayer funded tertiary institutions aided and abetted by the media. They “know” all the answers and never hesitate to tell the public what to think. The only fact is that the earth is currently going through a warming cycle just as it has gone through ice ages. The “man made” theories (in my opinion- note that) are just that, theories based on computer modelling. I suggest the global warming “experts” have delved deep into the Josef Goebbels book of propaganda, state something as if it fact (when it is opinion) and people will believe you.

I suggest the global warming “experts” have delved deep into the Josef Goebbels book of propaganda, state something as if it fact (when it is opinion) and people will believe you.

Not trying to be argumentative, but it appears you made up your mind long before this opinion poll was constructed, and you see it as a partisan or ‘greenie’ effort, which it is neither.

You made a nice long cast but sadly the bait was too old and fell off the hook as it landed. Most days the fish in this pond will not bite on a bare hook.

And if I understood the video presenter correctly, he said that countries adjacent the equator would experience a much greater increase in temperature than the poles. This is supposed to have been a presentation based on proven scientific act. However as it was not my belief that that was in fact the case, I checked after completing the survey and found that, as I suspected, the UNIPCC states quite clearly that it believes there will be only a limited temperature increase at the equator, but a substantially greater one at the poles.

I believe that @zevon1956 and @marmot have ably pointed out, in their own ways, the difficulty of constructing an opinion poll. As a long ago educator sometimes a goal is to discover if people’s opinions support fact (this thing) or fiction (that thing) regardless of the topic. What is ‘fact’ and what is ‘fiction’ are irrelevant when one is simply trying to put opinions in this ‘bin’ or that ‘bin’.

Attacking an opinion poll/those who created it because it solicits an opinion when one does not agree with the premise of what the opinion is about is a questionable look as I see it. Stating why one thinks a poll, or part of a poll is sus or poorly done for whatever reason is fair.

I trust @natural.thought will provide background as I admit my contribution is conjecture rather than learned insight into the project.

edit: An aspect could be to understand how people accept and react to fake facts as well as facts!