I am in the middle of a powerbanks test (those portable battery packs that keep your smart device going when you have been out hunting Pokemon all afternoon) and would like some feedback on the next batch of testing.
Our first test involved powerbanks (results to be available on choice.com.au before Christmas) at a 10000mAH capacity, which basically will allow you to charge the average smartphone a few times making it a great option for holidaying but they can be a bit heavy for the pocket and are more suitable for use when you have a backpack.
The next test I want to do involves powerbanks at a 4000-6000mAH capacity which should be more than enough to power any smartphone to 100% from dead and weigh less than 150grams.

So let us know and if we get enough response, we will do the test

Would you like us to test ultra portable powerbanks (portable usb chargers)?

I use one most days for my Garmin Edge GPS bike computer, which has a dead battery, so I run it with a 15600mAH powerbank, which was given to me by work a couple of years ago. I also use it occasionally to charge my phone, and also to charge the wifi temperature sensors in my aquaponics fish tanks, so overall it gets quite a lot of use. It is still going strong at 2 years. I am considering buying a much smaller unit of around 5-6000mAH for use on my bike, so would be very interested in the Choice test results.

With the lower capacity banks it is unlikely that they would fully charge a smartphone/tablet. It would also be good to know if regular charging a device not to capacity would impact on the life of the device’s battery…this would be useful information when selecting a powerbank for purchase…viz. ensuring that it at least has capacity to charge a your device fully.

We have three ~2400mAH powerbanks which were given to us at conferences and I haven’t used them yet as concerned that that they would only part charge our tablet/smart phone.

I really want to know if you can use one of these powerbanks to charge a camera battery, in or out of the camera.

If the camera battery has a USB charging input (5V), then it probably can, assuming it has enough capcity to do the job. My Nikon camera has an 8.4V battery, so a powerbank couldn’t charge it.

Hi @phb, basically every portable device (phones, laptops, etc) use lithium-ion batteries. This technology does not experience the same ‘battery memory’ that older technologies experienced. In fact, the most beneficial charge cycle for lithium-ion batteries is to keep them within 38-82%. I have been charging my iPhone 4 in this way for years and haven’t noticed any serious drop in battery performance.

Hi phbriggs2000
We won’t be testing 2400mAH powerbanks due to the limited charging you mentioned. You should be able to find these for around $10. The models I had in mind to test would be in the range from 4000mAH to 6000mAH with the lower capacity able to fully charge most smartphones and the higher end able to fully charge most tablets and (maybe ) small notebooks and be as light as possible.

You should have no trouble charging any of the latest small compact cameras as long as they charge via a USB type connection (micro A or B USB). If they use a dedicated charger with one of the hundreds of small pin connections, you may have issues.

The latest powerbank test is now on the CHOICE website

Whether traveling for pleasure of business, we look at 18 portable power banks that you can use to charge your smartphone on-the-go.

Based on the review, I went for a non-recommended, but fairly high up the list unit. Performance wasn’t that far below the recommended models, and the price and weight were significantly less, so IMO, it was the best deal.
I bought 2 of them, one for my wife, and so far we are very happy with them.

The most remarkable first impression of them is how far short of the nameplate capacity the measured usable capacity is!
I’d suggest false and misleading claims are rampant!

We have two Sony branded power banks. One Aussie purchased at JB and the other in Japan.

Perhaps the key issue in sizing is what the rating of the bank is referring to, and in consideration of ‘conversion efficiency’?

There is obviously a voltage conversion loss in providing the 5v as well as recovery losses depending on loading conditions.

There is also going to be a conversion loss in the device being charged (voltage charge regulation). A few percentage points.
And there are losses within the chemistry of the battery as it is recharged. (10% or more depending on the charge rates).
I have not seen a manufacturer’s figure for input power required for a full charge as a key spec for any mobile device? The data must exist. We just don’t worry about it given how little the amount consumed from the mains?

Add this up and a 30% loss compared to nameplate in Choice’s real world testing would seem normal!

The other point noted by @gordon is still relevant. The marketing if based on the internal battery rating is a slight of hand, although technically correct in describing one aspect of the product. Probably in the same consumer bucket as motor vehicle fuel efficiency.

The Choice reviews do not detail the internal battery storage capacity or voltage. However the real world testing does reflect the true performance and capacity of each product. Perhaps a weighted steady discharge test into a constant current load might add some clarity to how efficient each pack can be.

P.s. the Sony packaging in Japan made it relatively clear that the packs had two different ratings. One at the nominal battery voltage and the other lesser rating at 5v output. It would be interesting to check how these items are labelled locally?

I have a Moki 15000 mAh which has two USB-A and one USB-c plus a micro for charging the bank up. Its been good. But its bloody heavy. It came from Flybuys so I have no clue as to its cost. I charged the phone twice and its still at 71%.

I spoke to our product testers about some of the discussion here around nameplate capacity vs useable capacity. We’re definitely aiming to replicate real-world use in our testing, which is why we use the power banks to charge phones, rather than just using a static load.

The only comparative rating figure that is available for all power banks is the nominal capacity. Our testing reveals the usable capacity, but it’s unlikely that we’ll get a manufacturer-supplied figure expressed in Watts.

Also, things like input power required for a full charge might be interesting to know, but we don’t believe it is relevant for the vast majority of consumers - they will be more interested in how quickly the power bank can be charged, and this is something we tested.

The product testers don’t disagree with your comments here @mark_m

[quote=“mark_m, post:15, topic:12864”]
The Choice reviews do not detail the internal battery storage capacity or voltage. However the real world testing does reflect the true performance and capacity of each product. Perhaps a weighted steady discharge test into a constant current load might add some clarity to how efficient each pack can be. [/quote]

Capacity of any battery is expressed in Amp hours. Charging voltage is variable with devices like smartphones. While interesting, we think that quoting different capacities at different voltages would lead to confusion.

It is intetesting that the Sony branded packs have two ratings, one for the battery and one for usable output power?

Obviously current Australian marketed products only have one? 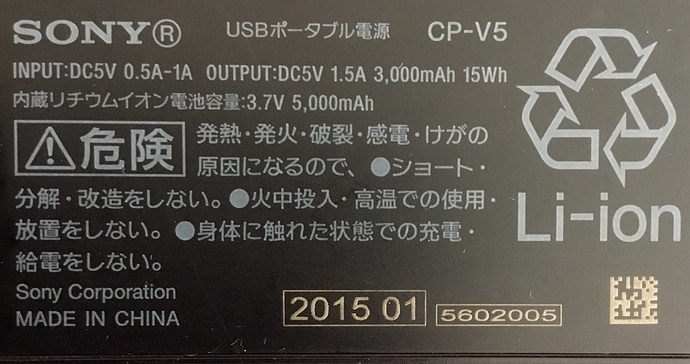 The output capacity at 5v is obviously the relevant one as that is the USB standard.

My understanding is that the Lithium Ion batteries used in current mobile technology hate being fully discharged, and are comfortable holding anything from 50% to 100% charge - as I have just learned @natural.thought has already stated in this thread. My own charger is a 10,400mAH Xiaomi from Ebay, and fits comfortably in my (large) pocket alongside my (large) phone.

Regardless, it would be nice for Choice to provide some more definitive information on this.

are comfortable holding anything from 50% to 100% charge

We believe that they are not entirely comfortable holding more than 80%, and that is why we limit the charge of each phone in our test to 80%. We also don’t recommend frequently completely discharging the battery.

We believe that they are not entirely comfortable holding more than 80%, and that is why we limit the charge of each phone in our test to 80%.

I see the word “believe”, and immediately think “okay, what does the evidence say?” - which takes us neatly back to the final sentence of my previous comment. It would be great if Choice could include such information with the tests.