Thanks to a number of reviews (including Choice of course) it looks like solar cells are a mature tech that is reliable and cost effective but batteries are not there yet for most situations. I am contemplating installing solar panels now and a battery later. This is in anticipation that cost/benefit will improve for batteries during the lifetime of the solar array. I know that this cannot be guaranteed but let us assume for the purpose of discussion that it so.

The background is that I am somewhat inland from the east coast with a similar cloud/sun pattern to Sydney but with a greater temperature range than on the coast. We get 44C days in summer and -6C nights in winter. I am on mains power but it is only moderately reliable. We have blackouts every few months (lasting from 1/2 an hour to 24 hours) due to damage to the network or locally. I have had my transformer replaced 4 times in 15 years due to lightning strikes on or near it and the transformer has survived but needed its fuses replaced for the same reason about once a year. One strike on the transformer set it alight and destroyed several household appliances. Rural Oz has excitement that you don’t get in town. If possible I would like to be able to use the battery during blackouts to keep the fridge etc going - but not the aircon. I have no plans to go off grid.

Assuming that I bought both together now are there potential problems with vulnerability to overload on the mains due to lightning strike? Is there much choice in systems that will function with the mains off? Are there pitfalls there?

I am particularly interested in the pitfalls of the two stage approach. The potential problems that I see so far are:

If there are other issues that I haven’t thought of please mention them.

Aside from getting quotes and allowing salespeople to babble at me where (outside Choice) will I find good information on these topics?

I recommend you Private Message @gordon who I am sure will be able to give you a lot of great detail and links as needed for your enquiries.

My recent enquiries re off-grid vs standard mains connected yielded similar issues to those raised. It would be good to see some of the answers shared.

Our rural supply is in a heavily populated area, so none of your country luck. Have still needed to use the generator for the fridge due to storm damage. They always fix the out of town services last!

The quotes I had for stand alone off grid pushed the payback out to more than 15 years, while there was no guarantee of enough sunlight for major storm periods.

Hopefully @Gordon has some answers.
There are apparently technical, safety and electrical retailer considerations that get in the way of the obvious. I received several suggestions on how to get around these, however they may not make for a happy retailer or regulator.

I was advised this is not possible for any mains connected system. When the power goes out your solar system is required to disconnect. Battery or no battery.

Incorrect! There are a number of grid connected configurations/systems that give you back-up power when the grid goes down.

Anti-islanding is what disconnects grid connected PV systems when the grid goes down, to protect line workers from electrocution.

With some battery connected systems, you can have the anti-islanding between [PV system + battery] and [grid], thus maintaining power to your house during blackouts. However, you need to have sufficient battery capacity to run your loads. Small batteries such as the Enphase battery (just 1.2kWh can only deliver a low rate of power, so you need multiple units to be able to run significant loads. Other batteries such as the Tesla Powerwall, sonnen, LGChem etc can deliver much higher power.

The recent Choice report said there were some that could satisfy the need to isolate the system (ie not cook the linesmen while they fixed the problem) while the power was off. Would anybody like to share?

Thanks @gordon and @syncretic

My sources were local solar providers. No doubt they have different interests to my needs. I had similar feedback from our electrical contractor! Hence I looked at off-grid solutions which I can’t justify. Will also now look at the most recent Choice reviews.

Hi Syncretic
As a retired, but still registered electrician, I would strongly recommend that you talk to your electrician about having an Over-voltage and Surge Protection Device (SPD) fitted to your switchboard. This will minimize the risk of damage to your switchboard and connected appliances in the the event of over-voltage, or lightening strikes to the line.

having an Over-voltage and Surge Protection Device

Thanks Airsie. I have the highest rated surge protection in an UPS I can afford for my computers, which have survived so far also I have one on the TV. I may already have one in the box too, what does it look like?

In the incident that set the transformer on fire the strike was very close if not direct, part of the hood over the side of the tranny exploded and went about 40m. According to the linesman there is a lightning bypass that functioned as expected and sent the bolt to ground however both the tranny fuses went plus the household breakers but a fair still bit of juice went through the house and fried several devices. I suspect I may have got an earth strike as part of this as the phone junction box (that is on an earth stake) also exploded. Needless to say we stay in the (metal frame) house during storms.

The SPD is normally fitted to the DIN rail on your main switchboard, and looks very much like an ordinary miniature circuit breaker (MCB) and is about the same physical size. Unlike MCB’s and safety switches, it has no controls or reset buttons on it - just a plain front face. Some of the models have a small green window to show the device has not been activated and is still protecting your equipment.
“The highest rated surge protection” as you described it, on your UPS will not protect any other other appliances connected to the mains, and if you haven’t already got a SPD fitted, you still should discuss the matter with your electrician.
In the event of over-voltage or lightening strikes, the appliances do not have to even be turned on to damage them when they are plugged into a socket outlet whether or not the socket outlet switch is turned off.
Hopes this helps in clarifying the matter. 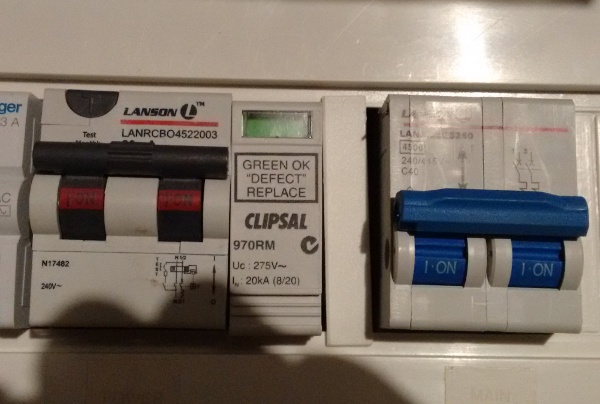 “The highest rated surge protection” as you described it, on your UPS will not protect any other other appliances connected to the mains,

I realise that. Thanks for your advice.

It (UPS surge protector) probably wont protect against a direct lightning strike to the line close to your home either, unless the UPS is unplugged.

It (UPS surge protector) probably wont protect against a direct lightning strike to the line close to your home either, unless the UPS is unplugged.

I’m fairly sure I have had one of those. See my detailed reply to Airsie above. We also had a tree explode and start a grass fire about 300m from the house on another occasion. I am not suggesting that a UPS is going to survive anything but it certainly helps with short drop-outs etc that would normally cause a hard re-boot. And it keeps the VOIP phone alive for 6 hours.

For a good starting guide, I’d recommend The Good Solar Guide by Finn Peacock - also check out his Solar Quotes website for a lot of good information.

For answer to your specific questions, there are a lot of informed and knowledgeable people (solar installers, industry people) on these Australian Facebook Groups who are always happy to help:
My Efficient Electric Home (mix of home owners, and industry professionals): https://www.facebook.com/groups/996387660405677/
Quality Solar (mostly solar resellers and installers): https://www.facebook.com/groups/850485541763578/

If there are other issues that I haven’t thought of please mention them.

Its worth considering the financial side too. Time it will take to pay for itself etc. Batteries take longer to pay for themselves (price is still fairly premium), whereas a well designed/specc’d solar system can pay itself off in a couple of years now. So if you stagger the installation it will drag that time out and then it depends how long you plan to stay where you are etc.

Not sure on more rural properties but Solar/batteries don’t tend to affect prices so if you sell earlier you might have to wear the fact you over capitalised.

If you do stagger I would suggest all but selecting the battery setup/brand and ensuring that the solar has the inverter(s) and the like (probably going to be quite a bit pricier too) that will handle having a battery and grid connected.

I am by no means an expert mind you!

Interesting point. I’m in a mixed small rural residential and small farm area. Recent discussions with the local solar company and two of the local agents are opposite.

The agents suggested not to worry about having or not having extras re valuations. They still price on land area, bedrooms and views. All the extras become selling points and are heavily discounted for value. So for rural the worst property in the best road may not apply. It’s more reasonably the best views and most extras that gives the best value.

I get the impression that when people are thinking about batteries for storing their solar energy, the focus tends to be on going off grid, which is ultimately the way to go. I agree with Syncretic that batteries are still evolving so the tendency is to wait, but there is a bridge that I think is worth considering.

The critical period in home use is the sun-down to mid-evening period for most people, especially those that work away from home. We installed a small battery which cost about $3,000 to cover that period, storing the excess from the panels in the day so it can be used when we need it for cooking dinner and evening-based household tasks. Admittedly our needs are small because we have focussed on installing the most energy efficient appliances we could find, use solar hot water, and have a passive-solar designed house so little or no space heating or cooling is needed.

Because WA’s electricity provider Synergy pays us so little (around 7 cents per unit) but charges us more than 4 times that much for any electricity we draw from them, we only installed enough panels at this stage to just cover our needs, as sending the excess to the grid is not cost-effective. The dramatic pricing differential, however, makes it cost-effective to use what we can store and the battery has a 10 year guarantee, so should more than pay for itself in that time, even if future developments in the solar battery area turn it into a dinosaur.

The ABC must be on to us?