We received a report about the below fine art sale being advertised on Facebook: 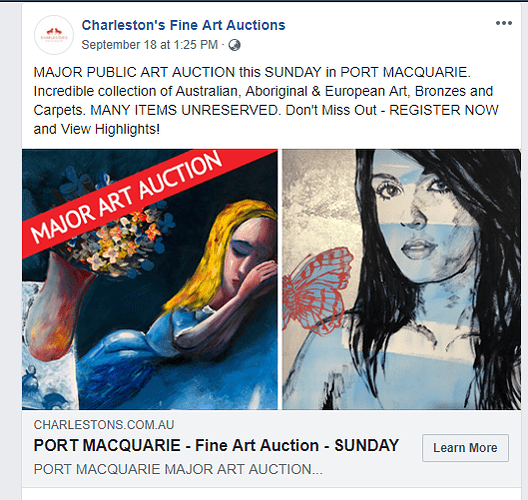 Clicking the link takes you to this auction event page, where among other things works from ‘Picasso, Chagall, Miro, Renoir, Dali, Matisse’ are advertised as part of the collection. While that would be a pretty heavyweight auction, as you might guess these are unlikely to be original prints and elsewhere on the Charleston’s site it is explained that, ‘At Charleston’s Fine Art Auctions you’ll find original lithographs, etchings, heliographs, offsets and limited edition prints by some of the most famous painters of the 19th and 20th centuries.’

The original complaint was that the ad and event page was a bit misleading, a ‘bait and switch’. However, what do you think? Is this a reasonable complaint or would it be more reasonable to assume that this fine art auction is unlikely to offer an original Picasso for sale?

Let us know in the comments below.

where among other things works from ‘Picasso, Chagall, Miro, Renoir, Dali, Matisse’ are advertised as part of the collection.

“I see nothing, absolutely nothing”

Where is the Catalog and detailed description of the items for auction?

Perhaps many items are genuine copies in the sense a lithograph is sort of a copy but not the same as a colour photo may be. Available in one format or another as suggested by the wording in the leader and further into the website where you might find clarity.

What I found stand alone in looking under the heading for ‘Auction Items’ was no listing. Just generic soft putty and these words for the European items:

We carry a range of pieces from European Masters that will fit a modest budget. Renoir, Chagall, Dali, Picasso, and Miro to name a few.

This in plain English says to me that these are actual items physically originals created by the artists listed. There was no clarification at this point on the exact nature or authenticity of the items. I even looked at the upcoming Brisbane Auction at Brothers. Exact same spiel.

Deceptive, although anyone in the ACCC might reject what is obvious, because to them it is.

Yes, that’s reasonable, especially as they mention prints and offsets and do not claim the great master’s to be originals. Down the page they say

‘We also had a common belief though art can be defined as “fine”, it doesn’t necessarily mean it should be elitist nor affordable only to investment bankers and multinational corporations.’

It is fairly plain to me what they are on about. Disclaimers don’t have to be absurdly explicit like the kitchen shop I went to that displayed a sign “Warning knives are sharp!” [Really, I didn’t make that up]

I could not imagine anyone (OK, there is always someone) expecting genuine masters to be auctioned at a traveling show.

I enjoyed this line from the page as did @syncretic : We also had a common belief though art can be defined as “fine”, it doesn’t necessarily mean it should be elitist nor affordable only to investment bankers and multinational corporations. My translation is not that you will get a bargain at an auction, but that copies and fakes are good enough for most of us to display, and cost a fraction of an original master’s work. They’ re also a lot cheaper to insure and you don’t need to keep the kids away.

I could imagine someone being enticed to attend based on the ad, but who would attend an art auction without having an understanding of artists names and values and would expect more than a token ‘off piece’, if that interspersed among prints and what are probably ‘starving artists’ works?

I don’t see it as bait and switch although it is classic ‘come-on over the top’ marketing. It would be a hoot to have someone who attends this to report back on what was on offer.

Agreed! I’ve asked the original complainant to report back if they have any further info.

Thanks for the thoughts so far everyone.

It would be a hoot to have someone who attends this to report back on what was on offer.

I was tempted by the alternate auction in Brisbane on the same date, only 30 mins earlier. If only there was an auction list?
Auction this a Sunday 23 Sept 11:30 am Brisbane.

Let me guess that they teleport the stock from Brisbane to Port Macquarie for the noon start there?

Perhaps we have found a purpose behind those mysterious poles with blue police lights on top.

Does the fact that there is only 1½hrs viewing time allowed before the auction not ring some bells? It really screams of ‘don’t look too hard’ merchandise.

Based on my experience of auctions, even of ‘lightweight’ goods & chattels, they would have a day’s viewing before the auction, and a several hours on the day of the auction. With art auctions anything that is not an original work of art (of repute or not) is clearly described in the catalogue, either as a print, a lithograph, a facsimile, ‘in the school of…’, etc.

The complete absence of an item listing with information on the lots seems to indicate the advertising is aimed at luring in naive buyers expecting to buy a piece of ‘fine art’ at a bargain price.

Due to the non-disclosure, I would classify this as deceptive advertising.

Due to the non-disclosure, I would classify this as deceptive advertising.

All the points you make could be explained by that. They could also be explained by a quick turnover, low margin operation that isn’t going to spend much time and money on opening showrooms or producing detailed catalogues. The two are of course not mutually exclusive. Buyers, especially in the art world, do need to do some due diligence.

They could also be explained by a quick turnover, low margin operation that isn’t going to spend much time and money on opening showrooms or producing detailed catalogues.

The art equivalent of a $2 shop?