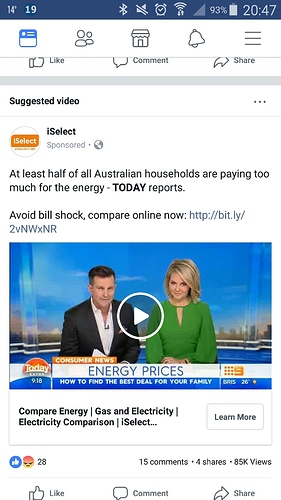 When I click on the video it took me to an iSelect page (http://www.iselect.com.au/energy/?utm_source=facebook&utm_medium=social&utm_campaign=en_september_dr&utm_content=today-energy-price&gclid=CLGc262s8tYCFQR-jgodxiQEiw&gclsrc=ds&dclid=CIjJha6s8tYCFYNylgod8PwLjQ)

The video on the page shows a clip from channel 9 news. The anchor introduces iSelect as a “consumer group”. A consumer group to me is an organisation which fights for consumer rights. ISelect is not a consumer group.

Clearly iSelect is using that clip for marketing.

“Suggested Video” “Sponsored” on Facebook gives it away in the online context - ‘Free to air’ television has only ever been free of up front charge to the viewer, but the viewer is the product and the customer is the advertiser - so everything, including so-called ‘news’ is in reality ‘advertising’.

I haven’t watched free to air television for years…

Is it unethical? I think so. At the very least it is misleading - but in the context of big media and advertising this kind of behaviour feels like it has been normalised over many decades to the extent most people don’t even register something is wrong.

For Facebook I use “Social Fixer” which gives me some very useful controls to change layout and appearance as well as suppressing posts that match certain filters. I never see suggested posts … Some more information HERE

If you wish to know more about which insurance policy Choice believes is best for you, from a completely independent point of view, have a look at https://www.choice.com.au/money/insurance/health/compare/about-you.

Also, I support @draughtrider 's suggestion for using ‘Social Fixer’ for FB. I have been using it for quite a while, and it keeps advertising and a lot of other ‘junk’ at bay. It also give you a much greater deal of control over FB.

I would not use iSelect if I want unbiased comparison :). I have voiced my concerns a few times about the comparison websites in this forum before

My concern is iSelect being categorised as a “consumer group” by a what appears to be a reputable organisation - Channel 9. And the iSelect using that clip in their advertisements.

I’m subscribed to channel 9 news on Facebook, so the Facebook advertisement didn’t look like to me as an advertisement at the first glance (despite it says “sponsored” at the top).

what appears to be a reputable organisation - Channel 9

It would seem that you are in a diminishing minority of Australians believe that the commercial channels are trustworthy & reputable:

Few media have fared well in voters' trust in 2013, but some outlets have fared much worse than others. News Corp's The Daily Telegraph remains Australia's least-trusted news outlet.

As the commercial channels are advertising revenue driven, I would suggest that you treat all of their content through a critical filter of “could it be cash for comment or content”?

Maybe time to take a look at these again

Our take on CompareTheMarket and iSelect

@dds, thanks for sharing this example. Unfortunately, I’ve seen a range of these ‘reports’ as well, and not just from the morning shows but across evening shows and in media in general.

It’s hard to challenge such practices on black and white legalities, and personally I think the parties involved play on these ‘grey’ areas (regardless of how obvious the reality may seem in some cases). Then, hey presto - the broadcast is on a Facebook ad or a website as a testimonial.

I see it as part of a wider trend to disambiguate advertising, especially online, that is surely unethical and overall bad for all parties involved including Facebook in this particular case. Whether it’s through laws and regulation, another media platform doing a better job or people eventually switching off from a torrent of misinformation, audiences will go elsewhere once a tipping point is reached. Of course, it’s hard to know when, how and where the tipping point will occur.

CHOICE recently spoke out on a similar issue against Viagogo’s Google ads, which also require close attention to distinguish between an organic search result thanks of the use of terms like ‘Official’.

If other Community members see examples of advertising that feels wrong, please feel free to post them in this thread.

I was perusing https://au.news.yahoo.com/ that displays ‘news items’ as a list with abbreviated content for each, and was surprised at the number of interspersed items shown as ‘sponsored’ along with the sponsor name. The sponsored items were by Ford Motors, iiNet, Hooch, 7Travel, AustralianSuper, Trendchaser, Wendy Wu Tours, Crown, TPG, and on it went with every 4th or 5th item being sponsored, not news, intermingled with news.

The content varied from soft sell to infomercial style content to industry sponsored ‘targeted information’ to in your face selling.

Fairfax is also notorious for it was well. It often places advertorials within its websites so that it looks like part of the news presentation. The same fonts for headings and text are used (and even has photos in support) and it is only once the link is pressed, that you realise that it directs you to an external website (to spruke products of some sort or another).

It is similar to the tactics used by Yahoo…with bait headlines to hopefully trigger a click.

The media identity's lawyers have sent Facebook a letter after the social media giant hosted a spoof ad claiming he used a treatment for erectile dysfunction.

Here are some more ads disguised as new articles. 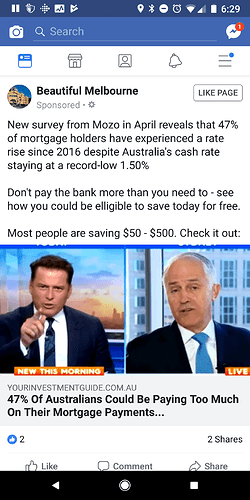 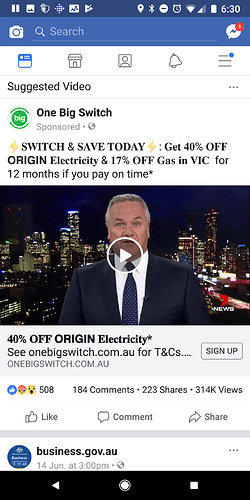 Rupert might be crying in his beer over this one.