Okay, this is really a serious frustration-vent but I also thought it may be of interest for people to get a handle on the reality of telcos outside the 'burbs.
We live in a beautiful area called Weyba Downs on the Sunshine Coast in Queensland. As the crow flies we’re only around 6ks from the international tourism hub of Noosa and 3ks from the regional business & shopping precinct of Noosaville.
Technically our area is zoned as rural & we live on a small acreage. Best of both worlds - close to everything but serene surroundings.
Despite being literally a stones throw from civilisation we are in the Dark Ages for telecommunications.
Our small community of around 120 homes is serviced by an antiquated exchange. The local line technician told me that the exchange is so overloaded & outdated that some properties have had to chose between telephone or internet.
We have both but the internet is appalling. An ADSL1 connection that suffers with regular drop-outs. Average download speed of 5Mbps, upload of 0.3Mbps.
We run a small business from home & it drives me batty. Uploads for clients that should take an hour max have to be left running overnight & then often fail.
I’m seriously considering starting to use overnight couriers to deliver files as small as 500Mb on memory sticks because it would be more reliable & faster than our internet.
Telstra control the exchange & lines & have made it quite clear they have no plans to upgrade or improve the exchange as the NBN is coming.
So… that great saviour, the NBN… we’ll be getting the much derided fixed-wireless type service.
Estimated roll-out? Probably late 2020…
And my cynical self says that it’s likely to be later than that as late 2020 happens to be the date they insist the network will be completed by & it will undoubtedly blow-out again.
‘So, what’s your problem? Use mobile internet!’ I hear you say.
I would in a heartbeat except we are in a mobile blackspot area.
Despite coverage maps showing that we should have full 3G & 4G at best we get 2-bars, most often 1 & 50% of the time zero signal.
None of the telcos have any plans to fix this.
So there you have it. Reality of life outside of the big cities in the areas that our ‘leaders’ say people should move to for affordable housing etc etc.
I just find it obscene that in the year 2017 in a country like Australia services that are really bordering on essential are nothing short of rudimentary & outdated and the fix that’s coming is nearly 1/2 a decade away & by the time it arrives will be about as high-tech as our ADSL1 is now.

And I should add that we now pay more a month for a truly pathetic ADSL1 connection than we used to pay in Sydney for a high-speed 30Mbps+ optic fibre-to-coax connection that included cable TV.

Have you thought about getting an antenna for your Mobile Network reception? I have included some links for you to look at about the antennas:

Hi @grahroll, Telstra supplied us with one of their basic mobile booster systems.
Wouldn’t work as there was nowhere around the house that had a stable, reliable signal for it to boost.
You’d set it up somewhere with 2 maybe 3 bars & come back 5-minutes later & it would have zero bars.
What gets my goat is that when we moved here we switched from Optus because of poor reception & went to Telstra based on their coverage maps & assurances that they have the best regional coverage yet their service is just as bad as Optus!
I’m still considering taking it to the telco ombudsman’s office as it’s out-and-out false representation.
Only after many hassles did I find that our area is on a near secret government blackspot website & Telstra knew about this.
Yet still their maps show total coverage.

You’d set it up somewhere with 2 maybe 3 bars & come back 5-minutes later & it would have zero bars.

I am less than 1km from the local tower (Telstra, Optus, Vodaphone). My house is “over the crest of a hill” from the tower and I have that problem on the Optus network in half my house that varies from 0 to 2 bars while the other half fluctuates between 2 to 5 bars. The partner has a Telstra data SIM in her 3G iPad and it is similar. Back in the USA I frequented a private airport in suburban Houston TX, and the mobile coverage around the hangars was similarly unreliable. While on a recent trip to SA I was surprised at how often we went to no service for 10+ minutes at a time along the main roads.

All the while the companies are resisting having to open their services for roaming to ostensibly protect their interests; in these times of no phone booths, increased travel and thus breakdowns outside metro areas, and the need to just communicate, the interests of all of us have been and continue to be held subservient to businesses’ profits. The telcos could, as was once the case in the USA, simply charge “bigly” for roaming minutes, but that would be too easy a solution to address their profit motive, I guess.

From my research I can see four Telstra Towers that are within 4 - 5 kms of Weyba Downs and the area appears fairly flat elevation wise so I think an externally mounted yagi pointing to one of these towers would give you a good chance at decent reception and make mobile internet worthwhile. 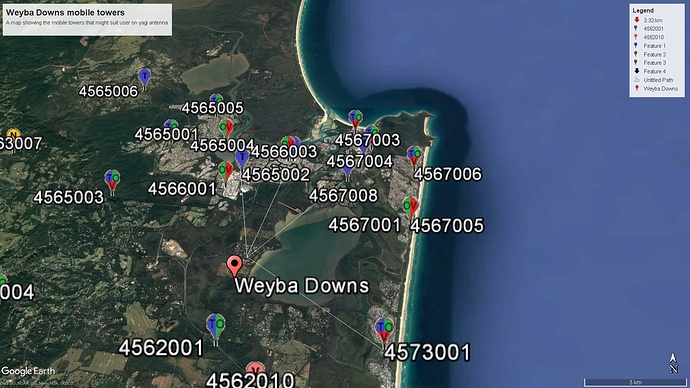 A 5th tower that is much closer, but I am not sure has been built yet, in the picture has the label 4562001 may be even better but you can certainly drive around and see if it is in place and if it is it should give you great reception.

I hope this helps you find a better outcome.

I agree completely with grahroll. The Cell-Fi unit Telstra would have supplied you is only half of the solution. The roof top antenna aimed at the best tower is the essential other half.

Sold out by the ACCC.

The telcos could, as was once the case in the USA, simply charge “bigly” for roaming minutes, but that would be too easy a solution to address their profit motive, I guess.

An antennae is what one Telstra support person suggested and they redirected my call - supposedly to someone who would be able to tell me all about it and sell me one too. But they connected me to the wrong place and talking to several more Telstra people (being redirect and then redirected again) I spoke with someone about antenna/aerials and as there is no port on my mobile phone to plug an antenna/aerial into, it will not work. We then had a general chat about WiFi as when at home my mobile connects quite happily via WiFi to my home LAN to support data communications BUT this does not support mobile phone calls. I have also looked at the Telstra webpage about such antennas/aerials and it is all about data communications.
I have problem with data communications at home. The problem is with incoming phone calls (and sometimes even making outgoing calls).

Hi Adam1
Have you thought about satellite. We live in South West WA & had the same sort of problem a few years ago. Was on dial up as that was all we could get, no broadband or mobile service (mobile black spot). Telstra at one point told us we could get broadband so we agreed to go ahead with it only to get a call from them a couple of weeks later to say we could not get broadband. Telstra do not support satellite so you would have to go with another provider.
Carol

The antennas they recommend also need to be connected to an internal device (the repeater that Telstra sent you) to send the signal throughout your house/building. The repeater has a connection point for the outside antenna’s lead.

Again from the Telco Antenna site https://www.telcoantennas.com.au/site/catalog/home-office/repeater-kits is this explanation:

"
What is a Smart Repeater?
The Cel-Fi Mobile Smart Repeater is a convenient solution to poor indoor phone coverage. Installing this device in your home can improve the reliability of phone calls, text messages, and increase 3G mobile broadband signal. For areas with poor outdoor coverage this model has an external antenna connector to allow the connection of an external antenna.
…/ /…
Why do I need to connect an external antenna?
Smart Repeaters transmit and receive at the same strength as a normal mobile phone. As the old adage goes ‘garbage in, garbage out’ - if the repeater is receiving a poor quality signal all it will do is transmit that poor quality signal louder throughout the building. Connecting an external aerial is a quick way to dramatically improve signal levels, allowing the repeater to boost call quality, mobile broadband speed, and reduce 3G drop-outs. 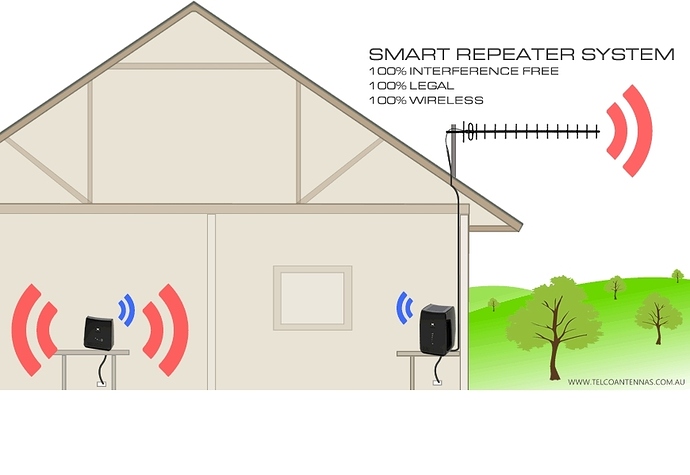 No real surprise, but it appears NBN complaints to the ombudsmen have surged recently.

Internet problems are the worst. Use CHOICE's news and reviews for solutions that apply to various internet service providers and VPN and Wi-Fi systems.

the repeater that Telstra sent you

Telstra have sent me nothing. And if they have called me as promised then they did it a time that their network was not supporting phone calls, did not leave a message, and as per the original problem description there is no missed call in the phone log.

Ahh sorry that was my mistake in naming and replying to the wrong person should have been @adam1. However in your case the example above could still assist you but would require you either getting some sort of mobile reception repeater as well as the antenna. The Telcoantenna site has one they nominate but you should be able to press Telstra on this, as they are you provider, for one of their repeater/booster boxes that will allow you to connect an antenna to it to improve your signal. Sorry for the mistaken reply but the info is still worth looking into.