Is there a standard for battery length and diameter?

You send questions, our experts answer them

Question: I’ve noticed that some AA-size batteries I have are slightly different in length. In some devices the Aldi batteries are loose and the device does not work. I compared the length of the Aldi battery against another popular brand and found the Aldi brand about a millimetre shorter. Is there a standard for battery length and diameter?

Answer: A 1mm difference in length between different AA cells is most probably within standards. An AA cell can measure 1.94 to 1.99 inches long according to Wikipedia, and 49.2 to 50.5 millimetres according to Eveready. If the very slightly shorter Aldi cells are loose inside the device, the spring clips may need adjusting, or possibly the foam sometimes attached to the inside of the compartment cover has gone missing. The easy check would be to use callipers to measure the length. If they are less than 49.2mm, then you have cause for complaint with Aldi.

Diameter can be an issue too. I bought a device that used AA batteries. Using my rechargeables, the cover would not close, since those batteries were slightly fatter than the normal non-rechargeable AAs.

Using my rechargeables, the cover would not close

I had a similar issue with a remote control for an old CD carousel. It had the type of battery compartment where the batteries slide inside a ‘tunnel’. The rechargeables went in with a bit of pressure applied, but when it came time to remove them for charging, they were stuck fast. Thankfully, it was a remote control that was only used about once a year anyway, and the carousel could be fully controlled by the buttons on the front of it.

When a battery appears to be too large or tight a fit, it may not be the battery size that is at fault. The battery compartment needs to accommodate the minimum and upper tolerance for the battery size specified.
EG per Wikipedia,

The dimensions and tolerances are standardised for each size, (IEC 60086 or ANSI C18 series standards).

Are all batteries compliant?
AA rechargeable batteries that are over size, 50.86mm long in this sample, (Aldi made in China product from approx 2012). I’ve several with some over 51.0mm long. Depending on device, these batteries may just squeeze in despite being too long. Where the holder accepts 2 cells on end, EG penlight, YMMV. 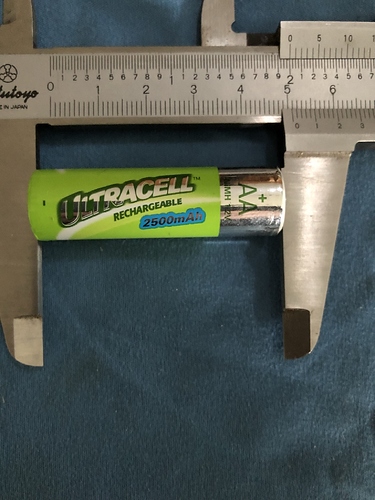 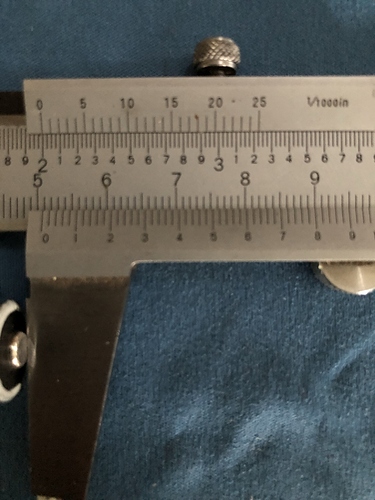 I hope you did not short that battery out with your vernier calipers?

Not at all. I did that with my tongue!

Just kidding. I’ve not used the cell for years, and it had self discharged. I was surprised I still had one lying around in the to be recycled box.

Hopefully Aldi’s quality procurement procedures have been upgraded since the original purchase. The anecdotes of certain manufacturers or suppliers having production lines just for the inspector, or special samples were legendary amongst my Asian based ex work mates.

P.S.
I’m not picking on Asia alone. From one of the staff at a Newcastle bakery some years past, which produced two lines of pies. One was known as ‘inspector pies’, assured of meeting the minimum meat content. I can’t comment on the other. Experiences signing off on Aussie manufactured steel work and plant could fill a whole week of party boring ‘war stories’. Now no surprise, surprise mostly made OS and imported.

The dimensions and tolerances are standardised for each size, (IEC 60086 or ANSI C18 series standards).

Are all batteries compliant?

Battery sizes, while they vary, aren’t governed by laws etc, they are an industry established sizing that battery makers either produce batteries that size or chose not to. If they chose to produce a battery size outside the specifications used by device manufacturers (which may also vary slightly from device to device), they will quickly lose the opportunity to supply the market as their batteries won’t fit.

We have also had devices where a AA battery was difficult to insert as the battery housing was tight…and using the same battery in another device they fitted easily. Housing also varies as well.

With both batteries and device battery housings varying small amounts, there will be times that batteries seem not to fit as well as the previous ones used.

battery makers either produce batteries that size or chose not to.

Fit for purpose. If a product does not meet a recognised industry or statutory standard the product should be returned for a full refund.

Many consumer products are labelled or have supporting data sheets that state compliance with a standard/s. ‘AA’ as a battery size is defined by a recognised ANSI and IEC standards. Any battery in Australia labelled as AA by the supplier, in the absence of a recognised Australian Standard would reasonably be expected to meet a recognised international standard.

If the device battery compartment does not accept a battery that is within the industry accepted standards, the device should be returned for a full refund.

P.S.
Other than the one example, I’ve never had a battery size problem with the well known brand name batteries, or products from reliable manufacturers of battery powered devices/equipment.

Vernier callipers, now with digital readouts, are readily available and affordable. Assumes one is interested in the fine details, and takes steps to avoid shorting out the battery terminals when measuring, eg cling film or plastic shim and subtract the thickness.