An article regarding Ikea agreeing to pay $67 million to US family of toddler killed by recalled Malm-model dressing chest. 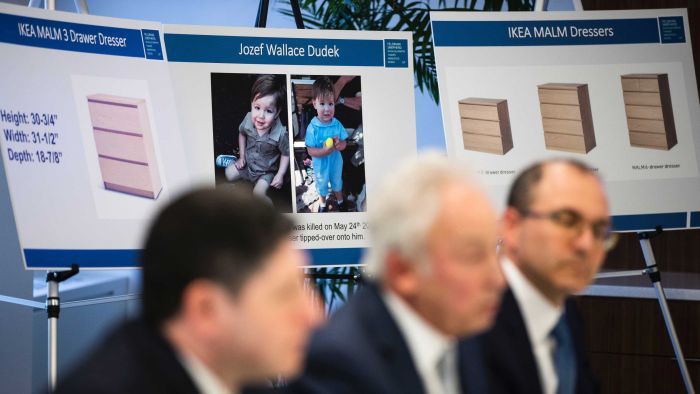 Ikea agrees to pay $67 million to the US parents of a two-year-old boy who died of injuries suffered when a popular and still available piece of furniture tipped onto him.

And whilst Ikea has recalled the dresser in the US, it is still being sold in Australia.

What an absolute disgrace. If only we had a regulator which actually did their job.

And whilst Ikea has recalled the dresser in the US, it is still being sold in Australia. 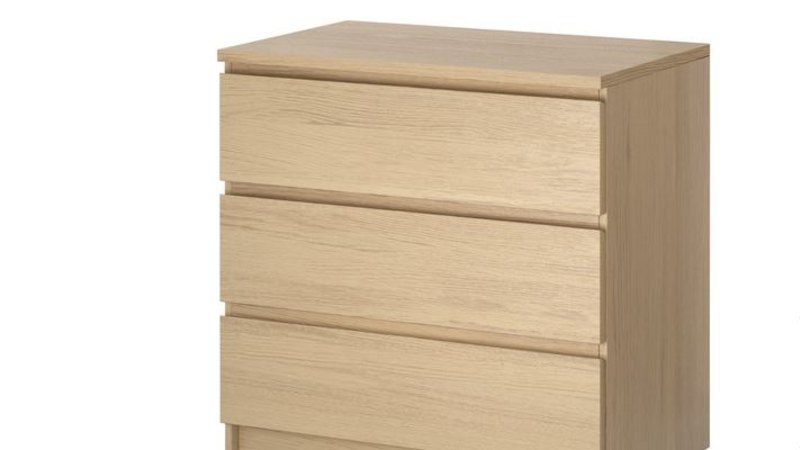 Ikea Australia is not issuing a recall on its "Malm" dressers and drawers, or any other ranges, despite an eighth child being crushed to death by a chest of drawers in the US.

IKEA chests of drawers and dressers are safe when attached to the wall, as directed in the assembly instructions. IKEA provides anti tip restraints and instructions for wall anchoring with all chest of drawers and other furniture which is at risk of tipping.

The ACCC also emphasised the importance of securing the chests to the wall but said: "Consumers are able to request a refund under Ikea’s refund policy, or seek one under the Consumer Guarantees provisions of the Australian Consumer Law.

"The US recall offers similar redress to what is offered to Australian consumers: free anchors to affix the chests and dressers to the wall or a refund.

“Many similar types of furniture pose similar risks, which is why it’s important that consumers make sure items are anchored to the wall.”

It seems IKEA is doing as much as it is required to with safety standards after the incidents. Is it really enough though? As stated by the ACCC there is furniture out there that pose similar risks and also need anchoring.

Is it really enough though?

Meanwhile Nine.com.au claims that the Ikea Malm dresser is not sold in Australia. 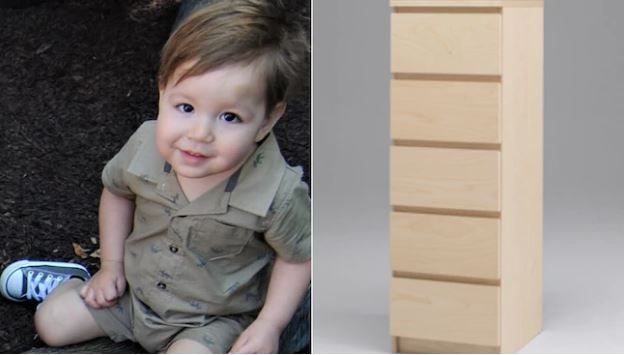 The Swedish furniture giant settled with two Californian parents after one of their 32kg set of drawers fel...

Even if the identical unit is not sold in Australia, this one is very similar and obviously just as dangerous. IKEA - MALM, Chest of 6 drawers, white/mirror glass, , Of course your home should be a safe place for the entire family. That’s why a safety fitting is included so that you can attach the chest of drawers to the wall.Built-in mirror.There’s a...

There are only so many ways you can build a dresser or tallboy. The size of drawers has a limited range for clothing and household goods - as opposed to say an apothecary’s chest. The size of a useful dresser that is still a moveable furniture item is limited. It’s a frame filled with drawers, the proportions can be varied but not by a huge amount. The main thing that affects stability is the ratio of height to depth. The taller it is and the more drawers you can pull out (and climb on) at once the more likely a climber is to overturn the frame. If you compare products 100 years old and modern the materials may be different but the design is much the same

Did those dressers and tallboys that our grandparents had ever fall and crush anybody? Why does it seem that Ikea has suddenly created a liability for itself by copying the same basic design?

Did those dressers and tallboys that our grandparents had ever fall and crush anybody?

Somewhere in the early 1930’s one small boy (long time a grandparent) caused what we would call an old fashioned wardrobe to topple. Nothing like a holiday at your Uncles hotel for a bit of fun climbing the furniture. Fortunately for his sister below, the door was open in just the right position.

Tall tales, but true from an often related tale of youthful mischief.
R.I.P.

P.S.
No comment on USA civil law and litigation required.
Every householder has a moral responsibility to ensure their home is a safe environment when children are present, I would hope?

An interesting addition to this - we have several Ikea dressers (all anchored firmly to the wall, the smaller ones with Ikea’s provided anchors as is very definitely indicated in the instructions, the larger one we used our own anchors for extra protection). The one in my son’s room was temporarily unanchored so it could be moved. We decided to do a couple of supervised tests. It doesn’t take much strength to tip the dresser, BUT we couldn’t get it to tip by placing his weight (20-25kg) in the drawer. In fact, the drawer runners broke before the dresser tipped.
I would be really really interested to see independent tests done in simulated real world conditions to ascertain what it takes to get them to tip, and also whether the anchors provided are adequate for purpose.

I do think that some responsibility rests with people who purchase any drawers, as it is not only Ikea’s which can tip. I have worked in an office where the very expensive filing drawers, which were beautiful, wood and large, did not have limiters and which prevented more than one drawer being opened (Ikea includes these and it is your choice to engage them) and the entire huge filing system tipped over.
We have a different set of Ikea drawers, which we have not secured to the wall, nor will we. But we have engaged the limiters, which prevents us from being able to open more than one drawer at a time.
And in days before Ikea, as a child, I pulled a wardrobe, not a chest of drawers down, because I swung on the door. It was a wardrobe made in the 1940s. And fortunately the room was small, which meant the wardrobe landed on a bed, which propped it up. So making this about Ikea is not necessarily the most sensible course. Educating people about managing the dangers of their furniture and the laws of physics is probably the more sensible option.

I do think that some responsibility rests with people who purchase any drawers, as it is not only Ikea’s which can tip.

I agree, that one could reasonably expect that storing normal items in drawers (such as clothes), the drawers would not tip over when the draws are open to their full extent. If the draws do tip over in such cases, a reasonable person may think that there is a design flaw with the drawers and a significant safety risk exists.

If one decided to say store books in a drawer, and the heavy books cause the drawers to tip when clothes don’t, then a reasonable person may also think that the use of the drawer for storing the books is not expected normal situation (not designed for) and such its tipping could be expected. Such tipping could be seen as the responsibility of the book/drawer owner.

I don’t know if this has been asked or addressed yet when it comes to securing these items in a rented property. Many times the inserting of nails or screws into walls in the rental market is very much frowned upon, so to secure these cabinets, dresser, TVs means adding a screw into a wall and perhaps incurring the wrath of a RE Agent or the owner. What choice then?

A elderly lady I help out recently replaced her upright cooktop.

What surpised me is that the electrican who installed the new cooktop has to install an anti-tip plate onto the floor to secure the rear feet of the cooktop, as well as insert a pin at the front to prevent the cooktop being moved forward thus moving the feet out of the anti-tip plate. Maybe a bit over the top…

While a tipping cooktop with hot pots on the stove could cause severe injuries, so can a dresser/drawers/cupboard that tips onto a young child. Why implement measures for a cooktop but not for furniture which could potentially have a greater tipping risk.

the new cooktop has to install an anti-tip plate onto the floor to secure the rear feet of the cooktop,

Assume this was a free standing oven and cooktop aka range.

Modern versions seem to be of lighter weight than days long gone. What ever the hazard I’ve noticed with the oven door fully open light weight or pressure on the outer end of the door can induce tipping.

Both of our older (20 yrs) gas freestanding oven cooktops were installed originally bolted at the base to the floor. A little less convenient but effective. Something you learn about when doing kitchen mods.

In some earthquake prone nations everything at risk needs to be secured against toppling. The situation of the IKEA drawers needing to be secured is far from unique.