How fresh is 'fresh' fruit and veg?

We’re planning an article on fruit and veg ‘freshness’ and I’m interested in hearing from the community about a couple of things:

Happy to hear any other thoughts, gripes or questions on the topic too! Thanks in anticipation…

As I grow a fair bit of my own fruit and veg, I think I have a good idea of what fresh food is

Sometimes similar fruit and veg can be found in the supermarket, but quite often it isn’t, despite various advertising claims - fresh food people etc.
One of my biggest gripes is with cold store fruit that goes off within a day or 2 of purchase- apples and pears that go brown on the inside, and strawberries that turn into a soggy mess the day after purchase etc.
Red delicious apples from the supermarket often are almost completely lacking in flavour, perhaps due to being kept for months in a cold store, for up to a year according to someone who used to work in the industry. I know my home grown red delicious have decent flavour.
I guess the main source of the problem is the supermarkets want to be able to supply almost everything all year round, so long term cold storage, imports from the northern hemisphere, and no doubt some chemical treatments, help them do this.
These days I generally try to eat what’s in season, or buy (well my wife does, as she operates a stall there) from the growers market if I don’t have any of my own produce- and I either preserve excess fruit and veg or sell at the local growers market.
I’ll be picking the last of my cherry crop this afternoon- you can’t get any fresher than eating straight from the tree!

Chokos. My wife loves them but haven’t bought any for a long time as they all appear to be ok on the outside, they’ve been brown on the inside.

yum, (truly) fresh cherries, lucky you @gordon ! Yes, there does seem to be an expectation that supermarkets have a year round supply of all/most fruit and veg, and cold storage and imports are ways to achieve this. I wonder if it was consumer demand in the first place that resulted in this, or if supermarkets themselves created this demand?

yes, it’s so frustrating and disappointing when that happens @ozcatfish_agogo. My big gripe is dry, floury apricots and peaches…

do you expect the fruit and veg sold through major supermarket chains to be as fresh as the produce sold through independent grocers or growers markets?[/quote]
Only it it’s advertised as “fresh”. Then, yes, definitely.

are there particular fruits or vegetables that repeatedly disappoint you when it comes to quality or freshness?

Apples. Largely because they’re waxed (what a scam that is!) it’s impossible to tell. So often they’re really old and inedible, obviously kept in cold storage for months - maybe years - and completely inedible.

They also seem to be artificially “ripened” - though really just made to look ripe, though still very unripe once you bite into them.

[quote=“rclemons, post:1, topic:13106”]which fruits or vegetables do you find hardest to judge quality/ripeness/freshness when buying?

Again apples. They seem to have that deception down to a fine art.

I was going to add tomatoes, but you always know that they’ll be unripe and flavourless.

I suspect it was the marketers who started the push to provide a year-round supply of everything, then claim it was consumer demand. People always used to be happy with in-season fruit and veg. 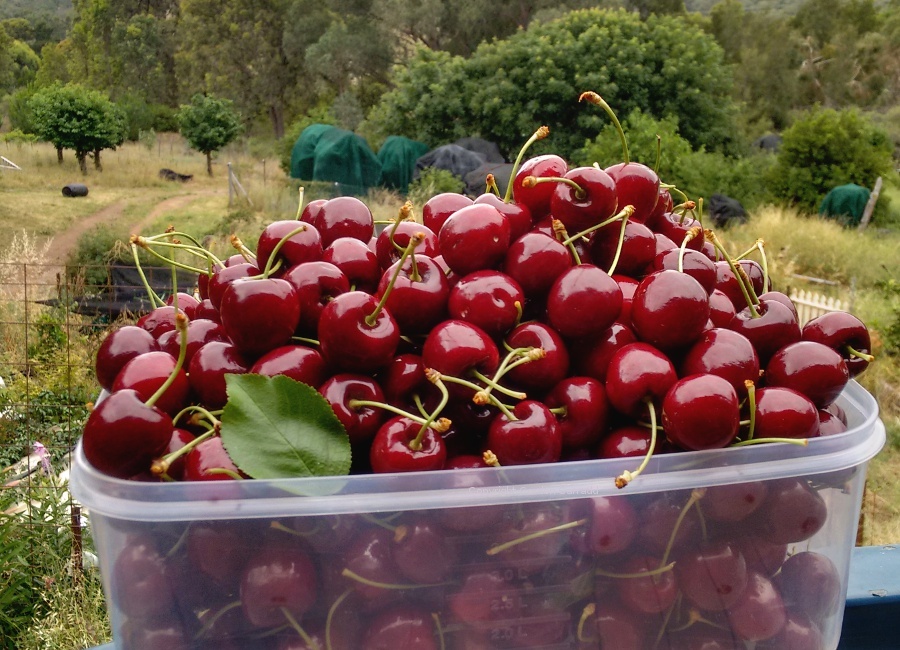 We brought some lovely looking apricots recently. They were so tart they were inedible. Stewed them, with a bit of sugar and they still tasted like cr#p. Ended up throwing them out. Carrots and celery seem reasonably consistent. Beyond that it’s a bit of a raffle.

We grow a lot of our own fruit & veg. What I buy is through smaller supermarkets - IGA, Foodworks, local people; not Aldi, Coles, Woolies.
Sweetcorn disappoints. I used to be able to buy whole cobs in their husks. Now I have to take either cobs with the top cut off (to expose the top corn kernals), one side of the husk removed (to expose a half to quarter of the cob) or cut into short uniform lengths with all silk & husks removed packed on a foam tray in cling wrap. The kernels start to dehydrate, mould starts to form, it takes extra labour (reflected in extra cost), I have to dispose of non-recyclable packing as opposed to the natural husk which goes in compost, an edible part is discarded, particularly the pre-packed variety where the butt & top tapered end are removed.

Silver beet loses its nutrients quickly after picking. I never buy it in shops & only eat my home grown.

Tomatoes - my husband likes the shop bought Gross Lisse, but won’t eat my home grown GL’s, Oxhearts, Romas, Cherry etc. He has grown accustomed to the bland taste and finds my home grown too flavoursome.

Berries always disappoint, so I stopped buying them.

Tried growing my own but since doing so in planters not getting much of anything. Last year had 6 strawberries, this year zero

last year had no raspberries and this year only 3… the plant is the variety that fruits from early summer till end of Autumn.

I do expect the produce to last, but have learned to shop at farmers markets, plus I know it’s local and seasonal… the rest I get from independent stores like Harris Farms.

When busy or the temperature is too high for safety,I purchase fruit and veg from the local Woollies and within a couple of days they go black and soggy. This of course from cold storage, both as described above. It really is worth driving to the next town to a F&V shop which has local fresh produce.
Think of the extra $ one can make by having the first items of the new seasons produce…except that they are last year’s crop and will not last a week. I thought “Greed is good” belonged to the 1980s.

No I don’t expect fruit and veg from the supermarkets to be as fresh as there storage practices have become something of a by-word. Tomatoes in particular have become very disappointing. We used to buy Truss Tomatoes as they were the only ones left with any flavour, but even they have become bland and uninspiring. We’ve travelled to Europe a few times, and the quality of produce in supermarkets in France and Germany is way better than here in Australia which is really sad. Farmers have been pushed to grow what the supermarkets want, not what consumers want.

I’ve been living in Darwin for a few years now and remember when the only way you could have fresh fruit and vegetables was to pick them yourself or find the Asian growers at the few weekly markets.

Supermarkets were notorious for selling what we figured was the produce rejected by southern consumers whether it was seasonal or not. People who moved here for their two year contracts were astounded that they were expected to pay extraordinary prices for very ordinary fruit and veg. Of course the variety was extremely limited.

Things started to change with the expansion of the town and its population. Supermarkets sprang up all over the place and they haven’t stopped. The supply frequency and reliability increased with road and port improvements, and later the railway brought a faster supply service as well. Darwin consumers are now accustomed to much better quality though this is not consistent. One major chain sells a line of iceberg lettuces that come in a ‘stayfresh’ bag, and tend to be rotting away in those bags too.

We have many more market gardeners who do a great trade at any of the weekly markets around town though there’s only two markets open through the Wet season. Growing your own remains the only way to eat fresh.

Like many others, I prefer to grow my own fruit and vegies but if I do have to buy fruit then I would get it from the local orchard in preference to the supermarket as I could be confident that it was fresher than from the supermarket. Oranges from the supermarket are often dry inside and/or on the verge of going off. If the vegies in the supermarket look droopy, I buy frozen vegies as they probably have more vitamins left than vegies picked a week ago or more.

I don’t buy any stone fruit unless I’m planning on eating it all within 2 days. I grew up in Young NSW where fresh fruit and vegetables were plentiful. We had a small orchard in our back yard. With the exception of cherries, even freshly picked stone fruit doesn’t keep well. Apricots are probably the worst keepers. I grow some vegetables, however, I’ve given up trying to grow tomatoes. Between the possums, bush rats and fruit fly I was fighting a losing battle. Spinach and carrots are easy crops to grow. I don’t know what insecticides are used on commercially grown fruit and vegetables, but I would advise everyone to thoroughly wash them. They require some pretty heavy duty chemicals to fend off the pests. My dad used to spray our crops with chemicals that are banned now.

q1, definitely yes, why shouldn’t they be as good, esp when that’s one of the large chain’s motto’s “We are the fresh food people.”
q2, Cauliflower, cut into pieces so can remove the bit that are browning. Packing up soft fruits like strawberries, with old ones hidden by fresher ones on top.

Yes I expect the same quality of fresh fruit & veg and in my experience this is true. I buy a lot of my fruit & veg through major supermarkets because it’s convenient. The quality is comparable to my local grocers (who seems to go for the lowest price - and compromises quality to do this).

I find anything in season & on special is ‘fresh’. These are usually in copious quantities at the front of the store. I try and plan my weekly meals around these. I also switch from apples to stone fruits in the warmer months. Anything on the shelves however is fair game - it might be fresh, but if it’s been on the shelf for a while then it’s more likely to be wilting or over ripe…

The hardest fruit & veg to tell freshness are the ones in plastic containers - berries, cherry toms etc. However buying these when in season generally means they’re ok.

I agree with the comments already made as I have also been disappointed with “fresh” fruit and vegetables purchased from supermarkets, especially floury peaches, dry oranges or apples with brown flesh. Where we live, the heat of summer and the frosts in winter make it difficult to grow much of our own produce but we enjoy what we can when we can. The taste and texture of our own produce are definitely superior. The lucky dip of buying avocados without bad areas and/or dark “strings” in them is especially disappointing considering the price one pays for them. Once I did take some bad ones back to the fruit and vegetable store and they grudgingly replaced them, but as I usually only get to town once a week at best, this isn’t usually possible. It also means that I observe how quickly the produce I do buy goes off. Slimy cucumbers and broccoli plus squishy zucchini are common problems. Unfortunately, our local market is only once a month.

Wouldn’t it be nice if supermarkets were required to label their fruit and veg with “picked on” dates.