Home batteries give households the chance to make maximum use of their solar power and access the cheapest retail electricity prices, or even go off the grid entirely.

When will solar home battery storage save money for Australian households? @apotter helps you do the maths. Read the article.

As I currently see it a home battery in a grid connected home at current prices will not likely pay off but after the early adopters and improving technology have lowered the up front costs it may well become a must have item.

Any thoughts on battery types? In particular I’m curious on the environmental friendliness, so effectiveness, life span and post-life impacts. I have heard Salt Batteries are better than Lithium Ion in relation to post-life but have not researched it myself.

Agree. My own calculations indicate tgey will never payback the initial capital outlay and install. They would only be viable for residences where the grid connecti I n costs are prohibitively expensive.

I beleive that the home storage batteries currently are an expensive gimmick and may be soon replaced by electric car batteries (if electric cars become the next main stay technology solution) which will be also be able to used for supplementary supply, reducing peak electicity costs.

I also have the same concerns. Mining and processing of lithium is not overly environmentally friendly.

There are other technologies such as bromide batteries which have good cycling lifes, may be cheaper etc, but not often considered/mentioned.

Nickel iron batteries were invented by Edison 100 years ago, are guaranteed for 25 years and there are installations of that vintage that still work - life time batteries!.
They are low maintenance, deep cycle and environmentally friendly.
There are only a few manufacturers - a couple in China and one in the US, but you can make your own.

NiFe batteries are great for longevity, and can be completely discharged without damage, but they are very inefficient cf Lithium batteries, and their operating voltage range is much higher than other battery chemistries, so inverter selection becomes a bit trickier. NiFe batteries are only generally used in backup systems in difficult/expensive to get to places, and have not generally been used in a daily cycling situation such as in a house. How they might perform in such a situation is a big unknown at this stage IMO.
I’ve lived off-grid since 1991, and have used a 21kWh LiFePO4 battery since late 2012, and used Lead-acid before then.
Batteries have always been the main expense for off-grid installations, but I’m still waiting for often repeated “cost of batteries is coming down” to happen. Lithium batteries are significantly more expensive now than when I purchased mine in 2012, mostly, but not solely due to the $AU exchange rate changes.

Lithium only makes up a small part of Lithium batteries- I think there is more Copper in them than Lithium, and significant amounts of Aluminium too, and all these metals can be recycled, but I’m not sure if anyone in Australia is actually recycling Lithium batteries at this stage. However, I’m sure someone will be doing it in the not too distant future.
I’ll be hanging onto any dead cells I have until they can be recycled, they certainly wont be going into Landfill.

As far as batteries being an economic proposition for grid-connected houses, financially it just doesn’t add up at the moment - payback time is generally longer than the warranted lifetime of the battery. However, if you value other considerations, such as having electricity during a blackout (only a limited range of inverters can do that), then the value of grid connected batteries increases significantly.

That’s a great question. Have a look at Aquion’s saltwater batteries. http://aquionenergy.com/

Hi, New to this chatfest, but this subject is a fav.
Researched this years ago for remote mining projects I was involved with and discovered Zinc Bromide are your best option. ZBB was an Australian Co. but typically lacked Gov support so where snapped up by the Yanks, now they are charging twice the price, its now called ZBB Energy Corp. Luckily another Australian company has taken up the slack; Redflow. They have a product ready for the market, think in about 3 months? They have a 10Kw system for normal home use and larger to commercial units. Think the price starts at about $15k but check. To me its an excellent option, as I live in Adelaide and the coal power station at Port Augusta has just been shut-down. Have spoken to people working at the station and industry in SA and they believe there will be massive shortfalls this Summer, so such a backup unit is the perfect way to maintain stable energy to you creature comforts!

Redflow ZCell batteries are on the water now, on their way to the Australian market, see this article: Redflow's Simon Hackett sees strong interest in Australian flow battery technology, and is rolling up his sleeves and giving installation instructions himself.

You can read all about them here: https://www.zcell.com/ and here: http://redflow.com/products/redflow-zbm-2/
They currently work with only a very limited range of inverters, and have self-maintenance cycles where they are not able to deliver energy, so for an off-grid system or 24 hour backup, you’d need 2 of them.
They are 10kWh batteries, but you can only draw 3kW continuously from them, with a 5kW peak discharge rate, and are a minimum of 68% and a maximum of 80% efficient (they produce a lot of heat and use cooling fans), not as good as Lead-acid batteries, and well down on the 95% of some LiFePO4 batteries.

It looks like the first ZCell batteries will be installed in Australia next month, starting from $17500

Tesla have released the Powerwall 2 which is a 14 KWh battery and they have produced Glass Solar Roof tiles check out this link about it: https://www.tesla.com/en_AU/powerwall

Also a Queenlander has placed a Powerwall in their house and uses off peak power to top it up…He says it saves between 2 and 3 $k a year in their home. https://vimeo.com/178410010?from=outro-embed

It’s taken over 5 minutes, but I have still only made it 12 seconds into the video (just got nbn satellite yay

), so gave up on it. Solar + a Powerwall could certainly save $2-3K per year, but not just a Powerwall, unless you are fully cycling it each day - 6.4kWh from the battery, and your grid electricity costs in the order of $1/kWh or more!

365 days per year * 6.4kWh = 2336kWh/year. If your electricity is a more reasonable 30c/kWh, then it will only save $700/year at best if charged only from solar. More realistic is only averaging 80% depth of discharge each day, and if using off-peak electricity to top it up, savings of under $500/year.
10 year warranty, cost ~$10000, so it is not a viable money saving storage system yet.

I haven’t seen pricing on the Powerwall 2 yet, but I’m hoping with it I’ll see the long promised, but absent so far, reduction in cost of storage!

If you haven’t yet viewed the videos and still would like to I have captured them and could share them with you on OneDrive. Obviously I would need an email address to send the share link to, one file is 48 MB and the other 297 MB in size. Anyway let me know if you are interested.

Thanks for the offer, but no need thanks, as I’ve read quite a bit about the PW2 in recent months. About the same cost for twice the PW1 storage capacity, and one option has an inbuilt inverter, so it is much more financially viable now. In some areas with high cost per kWh, such as SA, it is definitely worth installing right now, particularly in conjunction with new or existing PV panels.

For those who are interested, Energy Matters has a solar calculator which is also worth looking at should solar be considered. We used it many years ago before buying to see what sized system we would need and what varying sized systems would do to our power bill. Even though we used the website, we didn’t use them for our PV solar install.

Interesting enough though, their calculator was within 5% for the average annual generation it calculated for Brisbane (and for our 6.5 years worth of data)…so it is reasonable reliable for SE Qld. Not sure how reliable other parts of Australia are but assume that it should be just as good.

It’s based on global solar radiation data from BOM, NASA etc, so should be as good as the data is. However, the data is estimated from satellite images for much of the country, away from the capitals, so there will be some local variations. The nearest station to here for where it is estimated, about 10km away, does show some differences, for the odd day I have looked at it. One of these days I might get around to reducing/converting all my radiation sensor data to see how it compares to the satellite data on longer time scales.

Here is a couple of links with a bit more background on the Powerwall 2: http://www.pcauthority.com.au/News/448442,everything-you-need-to-know-about-elon-musks-tesla-powerwall-2.aspx https://www.solarquotes.com.au/blog/powerwall-2-warranty/

Here is an article on what can be expected with the right combination of Solar Panels and Batteries. At the end of the article it also states that the Powerwall 2 will be here around next month: https://electrek.co/2017/02/21/tesla-powerwall-one-year-ownership/

Tesla’s solar roof to cost less than a regular roof – even before energy...

Elon Musk made quite the announcement today. During the special shareholders meeting to approve the merger with SolarCity, which they approved by 85%, he said that he was coming back from a meeting…

The Powerwall 2 DC version is no more, and the AC version will be delayed some more, some say until June.
Ron Brakels in Finn Peacock’s blog has a bit to say about it here: 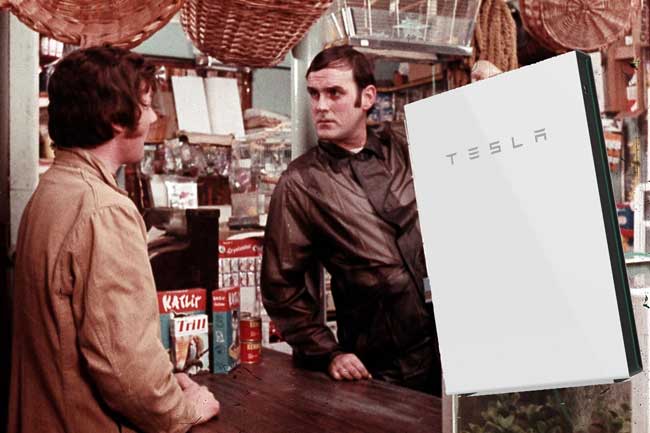 The DC Powerwall 2 is no more! DC has ceased to be! It has expired and gone to meet its maker! DC's kicked the bucket! THIS IS AN EX-BATTERY!