Has anyone had any luck in getting Google Maps to change the names they are using to the correct ones?

In the link bellow Ithaca creek is miss-named as the Brisbane River. I’ve tried the “send feedback” function but it’s mainly to deal with road and place names, not water ways.

In the past they have successfully updated navigation directions that I’ve queered.

Can I add to this that there are some photos included in Google Maps that are not relevant to the named addresses. No luck yet in getting these changed too.

Some of the errors and especially misspellings of places are intentional. They are planted to be able to identify ripped off digital databases.

My street is a Close but my GPS map has long had it as ‘Clos’ as a trivial example.

Navigation directions are problems where it goes beyond nomenclature to safety so they are more inclined to make corrections.

Ithaca creek is miss-named as the Brisbane River

Perhaps if you report your barge grounding on the Brisbane River with the coordinates, and query whether it is really Brisbane Creek, or even Ithaca Creek, they might perk up and have a look

Some of the errors I have noted may not be down to Google. One of our local roads is a gazetted road reserve at state govt level and labelled according to registered titles. State generated mail uses the registered details, eg land valuation. Road name lot/street no.

The local council has renamed a portion of the road as a continuation of a different adjoining road. There is some logic to this, and the two residents (farms) use the council street name and numbering.

Neither the State or Council want to resolve this. Only made three attempts to help them! It has impacted on the postie who has changed twice in the prior two years. I’m the last house with a regular number and street sign. Google implies either street name. Garmin and TomTom uses the state road name and sends some of our visitors through the 4wd forestry instead of bitumen at the other end.

I tried with Google once, to no avail. I no longer have gmail, Faceplant etc so expect Google will not communicate!

I do feel a little better knowing Google did not single me out.

I have had reasonable success with Google maps, but perseverance helps, as in try again, again, again, again & again. It helps to have good posties, when you are dealing for a organisation that has no road address and uses a PO Box number that doesn’t compute at Google.

A small island near where I am staying in Wakatobi, Indonesia, is called Kambode by Google, but is actually called Kapote. I did send the correction last year, though I don’t claim credit, I am sure many others have also.
Now, the name Pulau Kambode is still there, but click on the only red marker on the pulau [island] and Kapote also appears, leaving it up to the consumer to decide whether Kapote is a town or second name for the island.
If this is an e.g. of Google’s check on their data, it is a very poor way to create maps. Maps are meant to be accurate - or what use are they?

My efforts at changing Google Maps have generally related to incorrect locations rather than incorrect names. I’ve just advised them that their location of a particular museum in Rome is outdated. It’s recently moved to a new location outside the centre of Rome, but Google Maps still has it in its previous 2017 location. Still waiting for action. So far I’ve just received an automated “thank you, we’ll let you know” sort of message. Some years ago I advised them they had placed New Zealand’s Waiau Falls, near Coromandel, in the sea, when in fact it’s several kilometers inland, in the hilly country along the 309 Road. For a while after my advice Google Maps had two locations, the old, wrong one, in the sea, and the new, correct one. i see that the incorrect location has now disappeared, but it took a long, long time for them to get it right. I agree with the previous comment about photos being frequently incorrectly attributed to a particular location. Happens a lot on TripAdvisor too.

I support @yesnolink’s answer, as you’re dealing with an algorithm you need to flag it a bunch of times. You might find having a Google account with verified email helps the situation. As another alternative, you can also ‘add a missing place’ and insert the correct details.

Brendan, should we all consider the algorithim might also be programmed to compare source data and ignore multiple requests for the same outcome from the same source?

Google appears to be expert at tracking individuals, in so many ways!

I think the algorithm does place a heavy weight on source or existing data, and it will ignore requests to a certain point too.

In a previous life, I had the task of updating Google Maps listings for some well known businesses with a large number of existing reviews. When the businesses changed hands and rebranded, it was a major challenge to get the listings changed. There were usually multiple duplicate listings and this was causing real headaches in terms of people being able to find the place.

Trying to get hold of someone to have a simple ‘human conversation’ to clear things up was impossible, despite the fact this business was also a major advertiser on the Google network and even with direct human connections within Google Australia. In the end, I just pummelled away at it every day until we eventually managed to get them all merged and correctly updated.

I have been frustrated with Google Maps now for 18 months trying to have what looks like a public street but without a name, changed to being a private driveway. I live in a rural area with a 300 metre long driveway and often have people randomly driving up so they can admire the view. Will need to put in a gate but didn’t want to (elderly parents, deliveries etc) - would love to make Google Maps pay for it! I report the details every months in Google Maps, get a lovely email thanking me for my feedback but yet nothing changes. Extremely frustrating!

Instead of a gate you might consider an official looking sign with suitable polite wording. Eg “private property, no public access, authorised persons only” and a large motif of a security camera. My draft has a caution wild life with a large snake symbol. I also needed to put locks on two of our three emergency access gates, and that was just to keep the neighbours out!

An acquaintenance in a similar situation with a long gravely road like drive adjoining access to a national park has a different approach. The driveway has a series of very sharp, high and prominent speed bumps that only a 4WD can clear. It is after all private property. No need for bump warning signs or speed limit signs on a driveway?

Oh, dear. I’ve just discovered that Google Maps has placed Canberra’s Australian War Memorial in two separate places more than 500m apart. Let’s see how long it takes for them to take it away from the corner of Anzac Pde and Blamey Cres. Meanwhile, if you want a good laugh while you wait, try using Google Maps for directions from one part of Venice to another. You often get directions for transport by car where no car can legally or physically go.

You often get directions for transport by car where no car can legally or physically go.

That ‘feature’ is not limited to Venice

You often get directions for transport by car where no car can legally or physically go.

Meanwhile, over at the Russian Yandex Maps… 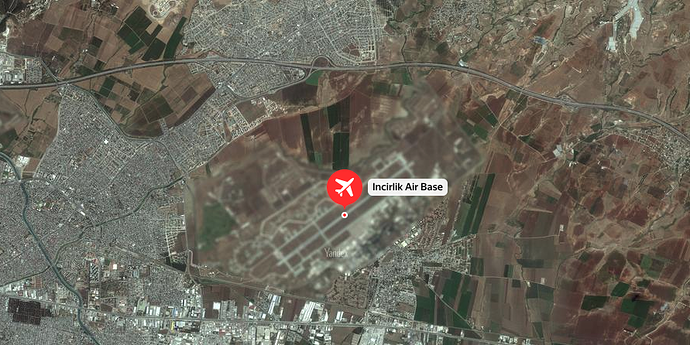 On a positive note… Someone recently invented a bar called “trevs place”, which allegedly could be found a few steps from my home. The block on which “trevs place” purportedly operated is dedicated entirely to parkland. I asked Google to remove it their maps and they did fairly promptly.

Apple Maps, but I assume Google is also not any smarter.

The M1 upgrade on the NSW Pacific Highway has been opened for some time. The map shows the new route clearly. Just don’t ask for directions. The quickest route is supposedly the narrow back roads, and not the new 100/110kph divided dual carriageway road. 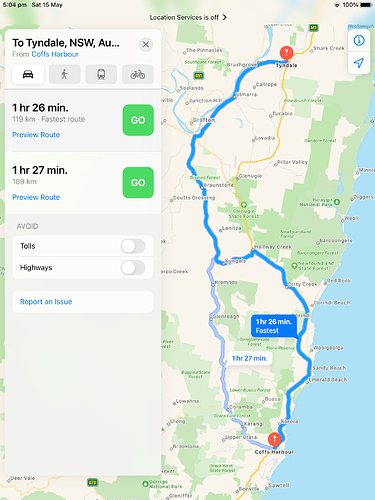