Golden Crumpets - use by date is unreadable

I’ve bought Golden crumpets for years but I’ve noticed recently that almost every packet has visible mold on the inside and this week I had one all crumpets really moldy on the interior surfaces when I opened the packet, but not visible on the edges.

I’ve taken to sitting at Woolies trying to read the use-by date on the packets but for the most part the use-by date printed on the cellophane wrapper is quite illegible. I brought this up with the person stocking the shelves but she just shrugged, said it’s the bakery’s issue, and walked off.

I suggest you ask for the store manager and talk to them about it. Also, you can return the moldy crumpets to WW with the docket and ask for a refund.

I brought this up with the person stocking the shelves but she just shrugged, said it’s the bakery’s issue, and walked off.

It seems your Woolies neglects to provide training for their stockers in even the most basic customer service.

You should have gotten a full refund on the product from the service desk.

ask for the store manager

The service desk and the store or duty manager are the appropriate places to raise problems.

If you report your experience to the Golden Bakery, with the lot number or anything else you can discern from the label imprint they may also take an interest.

The Food Standards Code requires that

The dates must be legible and prominent such as to afford a distinct contrast to the background and in the English language, in accordance with the general requirements of Standard 1.2.9 –Legibility Requirements.

which is another issue you could raise with Woolies, Golden Bakery, and Food Standards Australia New Zealand.

When we buy crumpets, we treat them like any other bread product and either eat within a day or two of purchase, or when they aren’t eaten, placed them in a container in the freezer and get them out when needed.

Once opened, even if the packing was not fully sealed like that for crumpets, air from the place where the crumpets are opened will enter the packaging. Air has millions of fungal spores per cubic metre and these fungal/mould spores will more readily enter the packaging and land on the crumpets accelerating their potential spoiling. Add in temperature and location of storage, the contents could easily spoil before the useby date.

If you have stored the crumpets in accordance with that outlined in the package…and they became mouldy before the useby date, then you have grounds for a refund. If you didn’t store in accordance with that outlined on the packaging or kept the product in its fresh state longer than the useby date, then a refund is unlikely as the mould may have been within your control.

While they are sold at store airconditioned temperature, storing them out of the refrigerator at home will accelerate mould growth as the temperature is likely to be warmer and also fluctuate during the day. We always store in the fridge on returning home from the supermarket.

The packaging for Golden Bakery (viz. TipTop) Crumpets also recommends refrigeration when storing and less than -15oC when freezing… 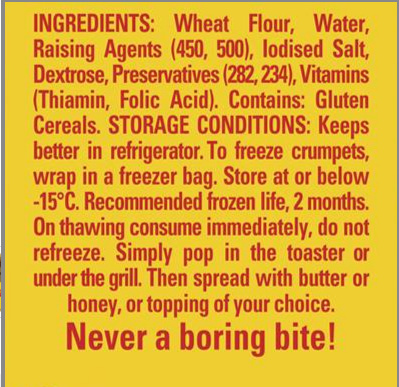 use-by date printed on the cellophane wrapper is quite illegible

I remember when we last bought them the useby date was difficult to read unless I has my eye on (glasses). One has to turn the packaging to catch the light so that it can be read.

Years gone by, they used to be the date stickers (like this), similar to that used for other products.

It is worth noting that the useby date is used by (bakery) delivery personnel to check the product is still within its saleable date range and also so that they can shift older stock to the front of the shelf when restocking. Did you ask the Woollies staff if they can read the useby date?..as this will determine if there is an issue with one’s own eyes or that of the product date stamp.

You can also send them a message if you are on Facebook about the difficulties you are having when reading their useby dates on the crumpets.

Edit: When you freeze them, put baking or greaseproof paper between them otherwise they will be near to impossible to separate.

I have been buying crumpets for 40 years and know how to store food and how use by dates work. I don’t need the lesson for 8 year olds.

These crumpets were within the airtight packet and moldy on opening. As explained I have sat on the floor at Woolies inspecting those on the shelf. When the staff run away, you don’t get an opportunity grill them.

When the staff run away, you don’t get an opportunity grill them.

You can go up to the service counter with a packet…as there is staff there all the time.

I have been buying crumpets for 40 years and know how to store food and how use by dates work.

The question was have you been storing them as recommended on the packaging. The useby date will be based on such storage methods when the product leaves the store. If one doesn’t refrigerate them, then the time to spoil will be reduced.

The questions I asked above are likely to be similar to those asked by Golden Bakery (TipTop) if you contacted them explaining the issue you are having with crumpets going mouldy.

If you have a crumpet pack at you home, you can also take a clear photo of the packaging useby date and post it here for us to also look at to determine it’s legibility.

I’ve taken to sitting at Woolies trying to read the use-by date on the packets but for the most part the use-by date printed on the cellophane wrapper is quite illegible.

I recommend escalating this directly to Woolies (phone, internet) and bypassing the store. These decisions, the logistics, etc. are mostly centralised.

For that particular product, I would say eat either on date of purchase or on the following 1 or 2 days (keeping in the fridge) - otherwise freeze on the date of purchase. The product is inclined to go moldy quickly.

Aldi never refuses a refund no hassle. I cannot believe how bad that is for service. Surely isn’t service. Times are getting worse

Totally agree. Something devised by the sales department maybe. I always check the expiry date (if you can actually find it) and most often it is today or tomorrow and if left go mouldy in no time at all.

I just checked both packets of Tip Top crumpet breaks and notice the use by date is printed on the Red Part of the Cellophane which is hard to read for most elderly folks. Suggest they should print it on the transparent part which shows the actual crumpets.

It seems endemic that some manufacturers apply their use-by or best-by dates in places that re not exactly legible or obvious, to be kind. It varies from incomplete inking to the colours to the placement, often seemingly making it as difficult as possible to find and harder to read.

If we all sent our complaints to food standards citing a claimed breech of standard 1.2.9 we could, not necessarily would, see some improvements. But wait, there is less!

Despite myriad references to it, it ‘expired’ in 2016. I was unable to find any follow-on. Presumably unnecessary red tape?

(b) be prominent so as to contrast distinctly with the background of the label.

A *warning statement on a label must be written:

All the current Standards can be found at

It begs the question how the cross references in so many other ‘rules’ survives for applicability when they seem to use 1.2.9 for the specific reference to legibility, and the register only shows 1.2.9 is no longer in force without referencing it has been rolled up into 1.2.1 and 1.2.5.

BB on bottles particularly translucent coloured bottles eg green or brown often are printed onto the glass rather than onto a label, this makes it both a search to find it and then tilting, rotating, getting the right light source angle to read it. Does this circumvent the labeling requirements as the standards say only if the info is “set out on a label” and doesn’t cover when printed directly to a surface.

I wonder? And does CHOICE have a view on this both from legibility and the way the Standard has been written as to whether this has been done to avoid the compliance?

BB on a Coke bottle can be hard to see until after the contents have already been drained a bit. The darkish liquid makes it hard to see even though printed on a clear plastic. Is that dodgy, an oversight, or just not realising?

Coke bottle can be hard to see

There are many products where the use by or best before dates are harder to read. This includes jars, plastic containers, bottles etc. Often one has to, once the date has been found, turn the container such that the light reflects off the printed date to make it easily read. This becomes particularly harder if one wears glasses or gets older.

The easiest date labels to find and read, are the stuck on paper ones like the price labels from yesteryear. Also those printed in dedicated area on the label (e.g. breakfast cereal) are also easy to find as well.

Exactly so @phb to all you posted.

Crumpets come home from the supermarket and go straight into the freezer. Current packet is kept in lidded plastic container lined with paper towel, in the fridge. When needed a new packet is thawed in the fridge overnight. I have yet to have a mouldy crumpet.

I tend to agree. My three closest supermarkets are all Woolworths, and I find that Golden crumpets are often dated the day after I buy them. This means that they are usually mouldy by the time I get to use the rest, as not all are used on the following day. Also the “use by” date is often difficult to read at best.
I cannot comment on whether this is also an issue at Coles, IGA, ALDI or Supabarn, as these are further away and I rarely buy perishables there. This is less of an issue over the warmer months, but it is very annoying in winter.

Although dates on many bottles can be hard to read, I doubt that Coke is an issue. It will last almost indefinitely if kept in reasonable conditions, and should be avoided by anyone even remotely concerned about their health.

It will last almost indefinitely if kept in reasonable conditions

I only stock a few cans of carbonated drinks for guests. Having zero guests since lockdown and having some myself just because, I can attest that they do go flat and the flavour can commensurately go off. My limited evidence has been a few cans of drink and one bottled beer that individually were about 6 months ‘beyond date’.