Food Shopping, things that don't really matter? or do they?

From weevils in flour, to mould on cheese, or sometimes the unexpected - what really matters vs what is ‘not ok’ in law? What is a technicality and what is something we should be concerned about?

Case in point, this image taken recently at a local supermarket: 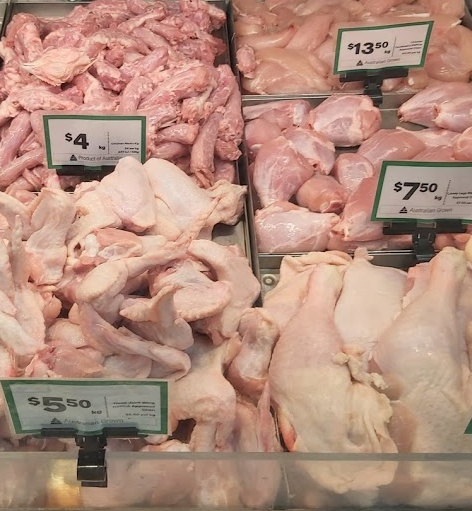 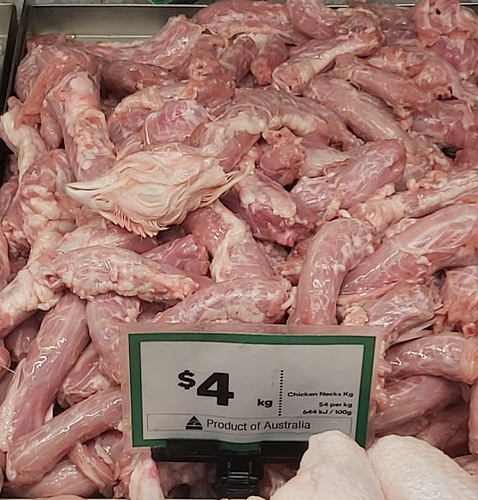 I don’t tend to roast chicken necks and eat them, actually never - I can imagine one might use them to create stock, in which case I’d probably add this bonus piece and be done with it. Mostly what I buy chicken necks for is pet food and only occasionally - I don’t imagine feline or hound would complain - so should I?

I’ve sometimes bought other so-called ‘fresh’ products which have unexpected additions or in the case of things that grow from the earth, ‘passengers’, does one just wash them off and continue on? or go back to the store and complain that part of the ‘broc’ was consumed by a worm? (this seems rather common).

I am unsure what point you are trying to make?

I buy one kilo of loose chicken necks from our local Woollies for our little dog’s afternoon treat and freeze them. Only ! per day.

They look and smell fresh but I consider the price to be just another example of price gouging by the supermarkets.

Chicken thigh fillets for much more per kilo than chicken breast fillets?

And so on with what were the traditionally “cheap cuts” of meat.

As far as vermin in purchases go, my only experience was when I bought a marked down pack of eye fillet steaks from our then local Woollies and found what appeared to be some cockaroach legs in it.

I returned it to the store and the meat manager immediately provided me with two fresh replacement packs.

I can’t see the problem. A chicken has many parts, thighs, breasts, legs, wings, necks, giblets, livers, hearts, heads, egg sacks, eggs, etc. They are all part of a chicken and one part appearing with another shouldn’t be seen as a issue, just something which can naturally occur.

If one can’t handle the odd wrong piece getting mixed up with another, then maybe one should reconsider eating meat.

Quite often pork skin still has hair, likewise chicken with unformed feathers…so a head appearing in the mix shouldn’t be treated with agasp. In some cultures, the head is a delicacy and not to be be thought as a by-product of production/something to the thrown out. If one has concern’s one could always ask for any part to the not included in a purchase.

There are somethings which are a step to far though, like a partially formed embryo in an egg (I chose not to eat these even though I have had the opportunity to do so overseas) or anything which may indicate the food/meat is off or not fresh. If we expect all our food to be clinically clean, then we wouldn’t be able to eat anything as they all contain things we can see, and those which we can’t. We seem to only find those we can see ‘yucky’, and those we can’t…well, we are none the wiser.

Looking at the images is this a question of not getting what you paid for due to some odd component that was unexpected or a test of the yuk factor? If you had bought a tray of chicken’s feet would the anomalous presence of a drumstick be a bother? I don’t usually eat feet although I have tried them.

I think your example images are distracting from the question stated in the text. Considering the text I would prefer that fruit did not have fruit fly and that cabbages did not contain grubs. These invisibly mar the product and they and their metabolites make my list of the inedible. Rodents are usually not considered food in Oz but can be elsewhere: different strokes, different cultures. If I was suffering acute protein deficiency I might change my mind.

On the other hand I don’t require my produce to be perfectly beautiful. We already suffer from the consequences of this quest for beauty in the amount of produce that is discarded as being imperfect and the amount of biocide applied in an effort to achieve perfection on top of that applied to get rid of fruit fly and grubs.

Some years ago, I opened a new packet of drinking chocolate and found a cricket, or a cockroach, so well coated with cocoa that I couldn’t tell which, and some black bits around it.

Knowing that there’s something that I find disgusting in my food prevents me from keeping it down, so it went into the bin.

I also don’t like getting anything in my parcel which I didn’t intend to buy, whatever it is

Knowing that there’s something that I find disgusting in my food prevents me from keeping it down, so it went into the bin.

You didn’t take it back to the shop or contact the manufacturer for reimbursement?

You didn’t take it back to the shop or contact the manufacturer for reimbursement?

Luckily for them, I couldn’t give it my attention at that time, Fred, but they lost a good customer for life.

I purchased a packet of pre ready made apple pie individually small size yesterday very clearly written on the packaging sticky toffee apple pie. When eating the pie it was darker than the traditional non so called toffee flavour etc. It surely had very little taste of toffee as in you would expect in caramel flavours. The colour was, slightly darker but I didn’t think it was, anything like toffee as claimed to be by the packaging. Also instead of being a regular 4 pack were a 2 pack. I’m not to sure what to think about this one. It may well be a shonky addition. I will buy the regular version next time.