I am wondering how EPGs work? Who supplies the content to who, and hence who sends the data to my machine?
Hence, when something is inaccurate, or as is occurring more frequently, some stations, seems random, not showing any data at one time, but there at another?
Eg, Mondays in WA the ABC evening schedule is often, maybe always, saying that World News is on ABC 24, when in reality it is Q&A

Other times, some programme details are shown, but then a blank section, not limited to ABC by any means, but mostly it will be just one channel from one provider, and the others are all complete!

When connected to the internet, Sony smart TVs use Gracenote as their epg data provider.

When not connected to the internet, the epg comes in with the digital tv signal and decoded by the TV. I assume that each tv station provides their own epg data as the data for a tv station (all channel it broadcasts) only appears after one of the station’s channel is selected. Other stations remain blank until they are selected and if all stations are progressively selected, the epg is shown for all.

I think @phb is referring to the Freeview Plus EPG, which is not limited to Sony TVs, and which uses Gracenote.

Most of the TVs we see through our lab now are Freeview Plus capable (technically, they support Hybrid Broadband TV - hbbTV), but the TV needs an internet connection to get the FV+ EPG, otherwise it has to use the broadcast Freeview (without the Plus) EPG.

Each network provides the EPG data to the playout providers of both broadcast and internet content. They often don’t handle these activities themselves anymore - much is outsourced.

Freeview is planning changes to the Freeview Plus service next month, but I think they are mainly to do with the catch-up TV side of things.

I found unintended humour in that press release @ScottOKeefe, but thanks for posting it.

“This time 10 years ago, Australian viewers only had access to five free-to-air channels, whereas today we have more than 25.”

From memory 10 years ago our 5 channels had 5 different programs running on them. Of the 25 today, many services are still duplicates, some are “trash TV” (infomercials and online huckstering), and many are low budget programs from racing through Americans’ over indulgent quest for ever more food and others, plus some drama that might be required and is provided via truckies in Australia and the Yukon and a few independent miners at their gold digs. I suspect much of the newer content has been “carefully selected” from the absolute cheapest that can be purchased from the US.

The number of channels might have gone up, but the quality of what we have to watch has arguably deteriorated. Heaven forbid we should miss those gems! (as well as the decent shows)

I’m in a regional area of vic between Melb Bendigo and Shepparton, our channel guide shows 87 distinct channels and they 'all work to varying degrees. But all are repeats of the majors from country town repeaters. There is not much difference in programming except for local news.

I don’t have the Freeview DVD.

When the data content is wrong it is the TV channel at fault.

What and who are the ‘feedout providers’?

Playout (not feed-out - my mistake) providers are companies that provide the service of receiving, storing, and transmitting the program material, commercials, and EPG data for the networks.

In the analogue days, each network had their own broadcast facility, where they had staff to cue the various content, and other staff to operate the broadcast transmitters. Now that everything is digital, some or all of these activities can be outsourced to other companies. For example, almost all Australian TV broadcast transmission is handled by Broadcast Australia, and in NSW, MediaHub provides playout for the ABC, Prime, WIN, and others.

As a TV viewer, if you have an issue with incorrect EPG data, you should complain to the relevant network (“TV channel”).

The EPG from Gracenote also comes through the TVs guide separately to using Freeview Plus EPG. The detailed multichannwl guide loads automatically when the guide button on the remote is selected and the TV is connected to the internet. If the TV isn’t connected to the internet and the guide button ia pushed, the EPG loads slowly from the channel’s digital data stream.

This is different to accessing Freview Plus which can be accessed by pushinf the green button on the remote.

I expect that the same data is used for both Freeview Plus and the guide, just presented in different formats.

The epg using the guide button is easy to read and scan what is on…will come in. The Freeview Plus epg is not so user friendly in its presentation.

This is what the epg guide looks like (selecting the guide button): 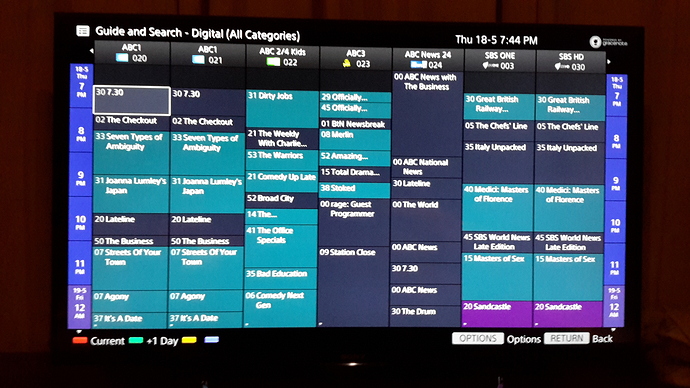