We received this Shonkys nomination via email:

I’d like to nominate ‘dog rocks’’. I got conned I’m sure. Paid around $20 for two rocks which you put in your dog’s water and they’re meant to stop the grass getting burned by his pee. Brilliant! Paid $20 for two rocks that do nothing. Wish I thought to sell rocks under this rouse. Oh and they say ‘proven’ on the pack (see photos). No evidence cited clearly. Enjoy…

Has anyone else tried this product, and if so what was the result? Is there evidence that this method would solve the problem? Let’s discuss below. 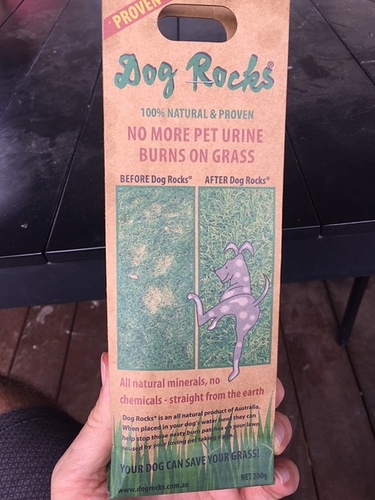 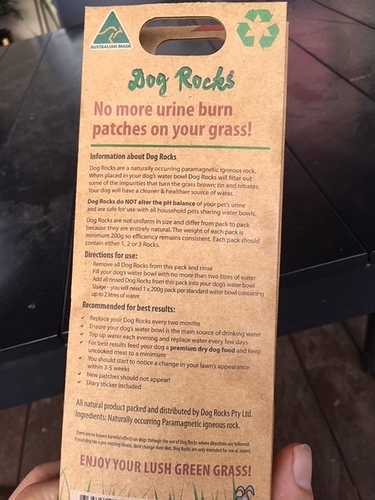 Here are a few reviews that my very good friend, Mr Google, discovered.

It reminded me of the famous Pet Rock craze many decades ago. 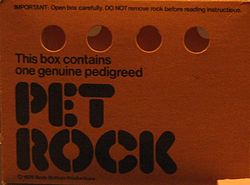 Pet Rock is a collectible toy made in 1975 by advertising executive Gary Dahl. Pet Rocks are smooth stones from Mexico's Rosarito Beach. They were marketed like live pets, in custom cardboard boxes, complete with straw and breathing holes. The fad lasted about six months, ending after a short increase in sales during the Christmas season of December 1975. Although by February 1976 they were discounted due to lower sales, Dahl sold over 1 million Pet Rocks for $4 each, and became a mi With his mo...

Yes, bought them, used them
RESULT: They do not work, and when I tried to return the product was told that the lawn dies due to the reason that the dog eats meat! Duh!?

If they think that I am going to put my dog on a VEGAN diet to stop the brown marks on the lawn - well, I think the dog would leave home.

SHONKY AWARD CANDIDATE for sure!

I tried to return the product was told that the lawn dies due to the reason that the dog eats meat! Duh!?

Quote from the packet!
‘for best results feed your dog a premium dry dog food and keep uncooked meat to a minimum’

So cooked meat is fine.

Lawn burn = too much fertiliser!
Is it the nitrates in the dog pee due to a dogs need to consume protein that are the cause? Nothing to do with the quality of the water in the bowl?

If our tap water is as bad as the ‘dog rocks’ spiel suggests, should we stop drinking it too?

P.S.
Both ladies, so no way they would dare!

Firstly the product claims years of scientific testing but does not say by whom nor is the data published. If it isn’t published and subject to review then it doesn’t exist as far as I am concerned.

Secondly the explanation given for its operation is gibberish.

From the screed: "Dog Rocks are a paramagnetic igneous rock. When this type of rock is immersed in water, the paramagnetism creates a magnetic field within the water causing a change in the ion exchange. This in turn diminishes the nitrates that are found in the water (a minimum amount) so when the dog drinks this water, less nitrates are being absorbed into his system and therefore less are coming out in his or her urine. "

You can’t do much about preventing mammals from excreting nitrogen compounds in their urine, if you stop feeding them protein (where those substances come from) or stop their kidneys working they will soon die.

Putting rocks in your dog’s water will achieve only one thing - waste your money. Although it might annoy your dog. This product is a dead set shonky. The vendor ought to be prosecuted for misrepresentation immediately.

The vendor ought to be prosecuted for misrepresentation immediately.

Totally agree, although any process for doing so seems to take it’s time.

Would the action simply hit the company Dog Rocks Pty Ltd, which may have minimal fund’s with the liability, or also capture any related private family trusts and the beneficiaries? It would seem reasonable to have the prospect of jail time for the perpetrators of the deception, if in deed the law considers the product a fraud.

Indeed. I believe the process is: urea is a component of urine, which is mostly water. Urea converts to ammonia in the environment over a day or 2. The ammonia is acted on by bacteria to initially produce nitrites with the removal of Hydrogen from the Nitrogen molecule, replaced with an Oxygen molecule, and then to nitrates with the addition of another Oxygen atom.
Dog rocks have no part to play in that natural process!

we put in a new rolled lawn last year, Our male Newfoundland (69 kilos) happily abluted on it with no ill effect (he ate a kilo of meat a day). Sadly he passed away last September, A month later, we were lucky enough to rehome a small female Saint Bernard (59 kilos). She immediately began creating “crop circles” in the new lawn. The pet shop recommended the rocks. we bought and used them as per instructions. There was supposed to be a 6 week period before the effects were noticible. In the meantime, we did our best to follow our hirsuite baby around with a garden hose and try to dilute the urine after she finished her business.

Nothing helped. we had obtained the hardiest Couch grass to stand up to dogs.
In my opinion the rocks did nothing except lighten our bank account.

The lawn is now been replaced with mulch. we will have a small section of artificial turf for the dog and clean it daily.

She immediately began creating “crop circles” in the new lawn.

The usual explanation for this is females concentrate on one spot because all they want to do is empty their bladder, whereas males mark territory and so do a bit here, there and yon. It isn’t that nitrogen is bad for lawns (“lawn food” is rich in nitrogen) but the excessive amount in one spot will burn it.