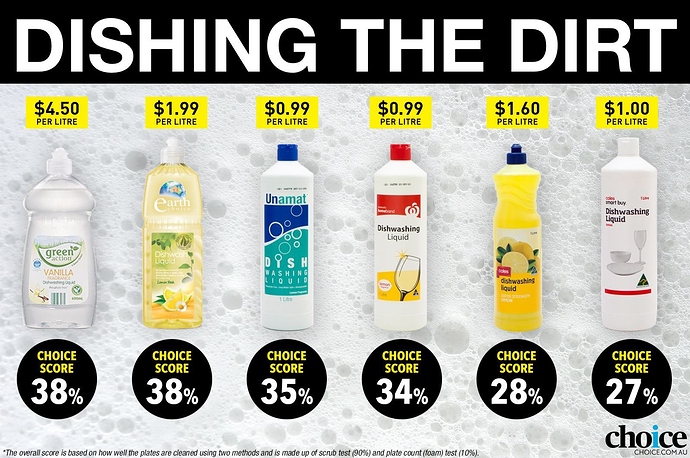 We used to buy Morning Fresh all the time but become disillusioned with it when it started to be manufactured in Indonesia. It didn’t seem to perform as well as that which was made in Australia. Reading the last test in Choice, we changed to the Woolworth’s Select Lime and found it performed really well and far better than Morning Fresh (equal or better than the old made in Australia bottles). The only downside is the Select lime detergent smells like lime cordial which takes a bit getting used to…and we lock it way from our child just in case the smell causes its consumption.

Update:Went to Woolies to buy the Select Lime whiich they don’t carry anymore. They still have the 1l Homebrand Lemon at .99 The Select Lemon Concentrated 900ml costs $2.69 while Aldi’s Unamat
1l is still .99

Just went to our local Woollies and the Lime Select Dishwashing Detergent is back in stock. Might be worth checking your own Woollies and asking the store when it will be in if it is not. .

We’ve recently run our dishwashing liquids test. You can also find out how we test detergents. 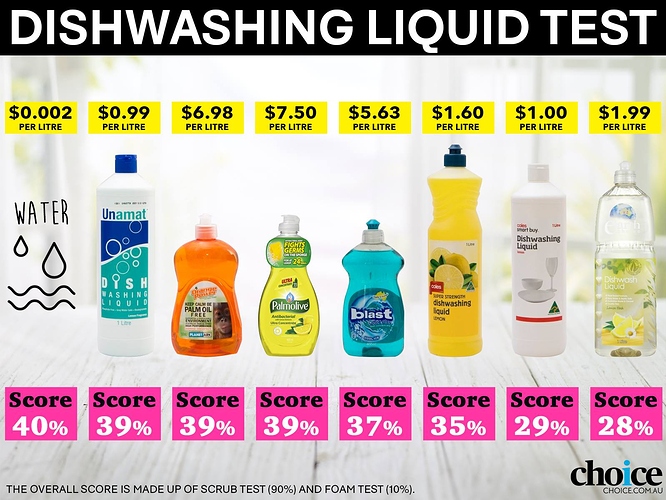 Where do I find previous test results? I am gobsmacked that Fairy Platinum has plummeted from highly recommended to be in the bottom third of the 33 brands tested! I find this result very hard to believe: I am assuming the testing rules have changed… please explain? I can see, in a popup, that this test was last done in December, 2016, but - I can’t access the results.
I have been buying & using FP because of it’s recommendation, and have been very happy with the product: it actually works to remove grease etc without over foaming.

It could be because of a change in product formulation. Companies often do this from time to time, for various reasons.

An example is Woolworths Select Lime detergent which scored well in past results but doesn’t appear in current testing. I have noticed, and also on label, that they have changed the formulation to a new one, but personally find the new formulation less viscous/runnier (to use more?), and not as good as the previous formulation (as more is needed to complete a standard wash). Don’t know why they did this, but I believe not for the customer’s interests. Why Woollies or its supplier did this is anyones guess but they made a good product mediocre.

I have been using Morning Fresh, Woolie’s Select Shine, & Aldi’s Tandil, depending on specials since the last review.

Perhaps it is just my perception, maybe as @phb suggests it’s a change of formulae, but feel that I am putting in more of all these brands to remove oily residue.

Just as an aside, it would be a real help if there was a value-for-money calculation done for https://www.choice.com.au/home-and-living/kitchen/dishwasher-detergent/review-and-compare/dishwashing-liquid.

This would allow a comparison between the evaluated products. For example, if a product is 1/3 of the cost of another, but you only need to use 2x the amount per wash, it changes the relative value of the product.

… so if I use water AND Earth Choice, are the scores cumulative at 68% ?

Hi @evanstrish3,
It’s correct that Fairy brand dishwashing liquid scored highly in the 2016 test. Since then, we have retested the products and the latest results are available on our website.

There are a number of reasons as to why we retest the products and how this can change the results. For example, as @phb manufacturers can reformulate their products (some do so more regularly than others). This year, we also added extra stain testing in the form of Bolognese, and it’s possible the product may have scored poorly in removing this type of stain. It’s always best to use the most recent results to get the most accurate test scores, which is why we retest dishwashing liquid regularly.

Hope that helps, let me know if you have any other questions.

Great suggestion @meltam, I’ll be sure to pass it on to the product testers.

. I don’t believe that we test more than one detergent at once either, but that could be interesting. Would it create some sort of ‘superwash’? Probably not, but it would be fun to try.