An article regarding a NSW Police BMW being totally after catching on fire whilst parked on long dry grass. 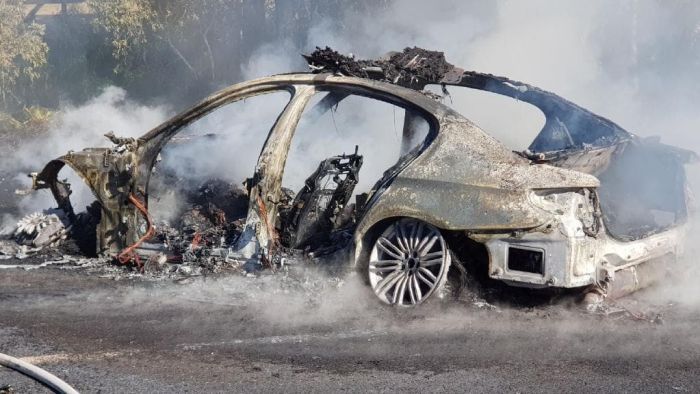 The price of parking on dry grass? $200k highway patrol car goes up in flames

One of the most expensive police cars used in Australia goes up in flames following a chase in north-eastern New South Wales.

Who would have thought that exhaust temperatures could reach 500 degrees Celsius?

It’s a well known danger for those who live in dry rural areas, I’ve seen it happen myself, but vehicles moved and fire extinguished before any damage done.

However, it’s not really a consumer issue is it?

Why is it not a consumer issue?

I was certainly not aware of the risk and I expect a great many other consumers would not be.

We don’t all drive high clearance 4WD vehicles and anyone travelling on the open road may need to pull over at anytime.

I have done so on countless occassions over the past 50 years.

It’s a well known and common risk, in particular with high ground clearance 4WD vehicles and farm machinery. They are exactly the types of vehicles that venture into the long grass, often!

Worse for many tractors, someone in the USA assessed that the traditional raised tractor exhaust sticking out above the engine might gas the driver.
The solution, which is a consumer issue (well for a select few of us) was to relocate the very hot exhaust to the lower side of the sump. Perhaps no big deal on a ranch, but certainly a high risk around these parts. Not sure which is worse. A farmer possibly dozing off on too much of … or the farm burning down?

It’s worth looking at what is in typical diesel exhaust fumes. It may have been a good call to change where they exit? We got the cheap option!

I’d regard this as a product safety issue, which I appreciate does sound funny in reference to vehicles as I’m not sure we think of these in normal ‘product’ terms, but our cars section on our website gives some further idea. Always good to clarify if there is any concern, and feel free to tag or message me if anyone needs guidance.

This issue has a long history. When catalytic converters were introduced in the US in the 1970s, there were claims the catalysts ran hot and started grass fires. Investigation found that grass fires started under vehicles had always been a problem, because the hottest part of the exhaust system in contact with ground litter is the “first bend”, where the pipe bends to exit from the engine compartment to run under the vehicle. An exacerbating factor now may be that many vehicles have the underbody covered in with plastic sheets to reduce drag and this is flammable.

They are exactly the types of vehicles that venture into the long grass, often!

I’ve driven in dry grass taller than the car, which was a very high clearance four wheel drive. Staying on the track was tricky and slow … I image we’d have sped up had it caught fire, but it was a consideration on a 40-something day several hundred kilometres from anywhere …

Given the story above was in NSW, I’m surprised the driver wasn’t charged with arson … oh, wait …

In terms of safety, it seems like something I’ve always been aware of - but I’ve had plenty of time in rural areas. It does seem odd that toasters don’t have a warning label telling people not to stick a knife in to retrieve toast, and there’s no sign on my dash telling me not to run over pedestrians …

They were from memory there as a result of chasing a car that had veered off the road due to the chase. Maybe they will also charge the arrested driver for causing a fire as they made the Police also leave the road to capture them

I was certainly not aware of the risk and I expect a great many other consumers would not be.

I suggest reading the owners manual in that case as everyone that I’ve seen warns you that the exhaust is hot and not to park it on or near flammable material along with other warnings relating to the hot exhaust.

Fires have always been an issue with cars on grass but catalytic converters increased the chances of a fire and lowered higher performance cars further increase this.

This is the problem with drivers in Australia, there is zero education on anything to do with cars and a quick test and you’ve got your license for life. Even in places like Russia you take a driving school on weekends for a few months that teaches you everything from the basics like vehicle maintenance, how a car works and so forth.

Australia will never reduce the road toll whilst they persist with the ridiculous idea that a 10 minute driving test is adequate.

Australia will never reduce the road toll whilst they persist with the ridiculous idea that a 10 minute driving test is adequate.

… not to mention retesting, both theory and practical. various workplace licences eg forklift expire after 5 years, what good reasonable safety reason is there for lifetime drive licences I wonder?

I have actually been driving for over 50 years and have never been involved in a serious at-fault accident.

The most serious accident I was involved in was whilst stopped in a stationary line of traffic in 1978 when an old fool who should have no longer been driving failed to see the stationary traffic and rear-ended me, writing off the vehicle and smashing it into the vehicle in front of me.

Fortunately I saw it unfolding in the rear-view mirror andI hung onto the steering wheel so hard that it broke.

He was charged and lost his licence as a result.

I also have extremely good knowledge of the road rules, unlike the proliferation of idiots I witness every day like the one in front of me today who indicated to change to the left lane, did not change, then tried to change into the right lane without indicating as I was already in the process of doing so, and then had the gall to give me the finger when I utilised the idiot alert so as to avoid an accident.

As far as reading the owner’s manuals goes, i would suspect that anyone who has an inclination to read one from cover to cover must be seriously pedantic.

As far as reading the owner’s manuals goes,

I enjoy a good read!
It’s so hard to find a novel these days with a good original plot, and an ending I approve of.

Also a great way to pick up trivia for the next pub quiz. How many drain plugs on a farm tractor diesel engine sump? Model dependent two might be a better guess than one! Also very useful when planning the next oil change.

Also some good tips about not parking with a hot engine and exhaust in the rice paddies. No chance of that here.

Indeed it is. There is also the application of the kind of sense which used to be common, but doesn’t seem to be so much these days!

The most serious accident I was involved in was whilst stopped in a stationary line of traffic in 1978 when an old fool who should have no longer been driving failed to see the stationary traffic and rear-ended me, writing off the vehicle and smashing it into the vehicle in front of me.

By chance, do we know how long the ‘old fool’ had been driving and whether they had ever been the cause of a serious at-fault accident?

As far as reading the owner’s manuals goes, i would suspect that anyone who has an inclination to read one from cover to cover must be seriously pedantic.

I wonder what one would call someone who would pay the cost of a new or even second hand car, and not bother to read the owners manual at least once?

Model dependent two might be a better guess than one! Also very useful when planning the next oil change.

They say (whoever ‘they’ are) that you learn something new every day - I’ve never owned a tractor, so I can’t be accused of being a pedantic tractor owners manual reader, but if I had owned a tractor, I could be - but I never knew of the two (and maybe more?) sump plug fact

I guess it makes sense - bigger engines maybe have even more!

but I never knew of the two (and maybe more?) sump plug fact

On 4WD tractors (even little ones) the drive shaft to the front axle typically passes through the sump requiring the sump to be divided into a left and right half.

Confusing perhaps for tractor owners, who some consider only think with one side of their brain. The same thinking may contribute to the frequency of tractor roll overs and tractors catching fire in long grass.

P.S.
For some unexplained reason I rarely get return invites to share!