I watch a lot of cooking shows and one thing I have noticed is that both qualified female chefs and TV show presenter female cooks never have long fingernails or wear nail polish.

Many have fingernails so short, it appears that they might have been biting them.

My wife reckons that it is for hygiene reasons for handling food and I suspect that it is in fact the case.

A trade-off between fame and beauty?

My wife reckons that it is for hygiene reasons for handling food and I suspect that it is in fact the case.

Yes. Aside from getting food and/or microbes under the them long fingernails are also a problem with many manual tasks.

Some examples in cooking are rolling pastry can be awkward as they can mark or cut the pastry and any kind of directly hands on operation, like rolling meatballs or filling dumplings will result in a lot of mess under the nails. The longer they are the more mess.

They are also banned in netball as they may cut the opposition.

I read that very long nails are worn by the upper classes in some cultures to show that they are so special that they are waited on and so don’t need to do anything for themselves. It may even be true.

Aside from getting food and/or microbes under the them long fingernails are also a problem with many manual tasks.

The other issue is fingernails are reasonably brittle and do break. The last think a chef/restaurant owner wants is a customer to find something unexpected in their prepared foods. Fingernails are easily identifiable, just like a hair

A trade-off between fame and beauty?

Finger nails are just one item that needs attention. 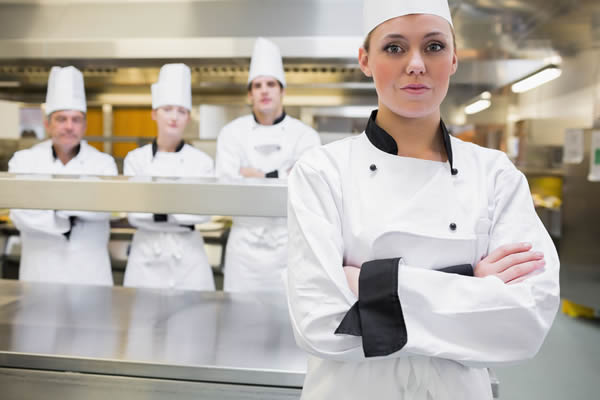 What Are There Dress and Grooming Codes For Culinary Students? If you were thinking of attending a culinary school and wondered what to expect when it

Short hair, no hair dye, no or minimal facial hair…
I can only score two out of three on the hair charts.
Not to worry, I’m no gourmet cook either.

Sorry but this gets a bit detailed…

When you see trained culinary people cutting, the fingers are curled toward the palm and the middle phalanx are used as a guide to slide the knife against when cutting. The fingers walk backward with each downward stroke of the knife along the item being cut.

This means the fingernails are resting on the food item being cut. Long finger nails would pick up food and or dig into the food being cut as mentioned previously.

Another issue with fingernails is that if the person is a little careless doing this procedure, the fingers can uncurl slightly with the distal and middle phalanx straightening resulting in a nail/s being cut off by the knife, or worse a cut through the nail into the nail bed. (I have seen the nail bed being accidentally cut into in a restaurant kitchen, and it is not a pretty sight with lots of blood.)

Sorry but this gets a bit detailed…

This may help explain, its called the claw grip: 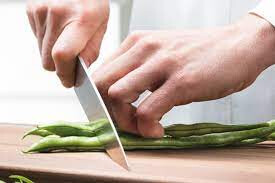 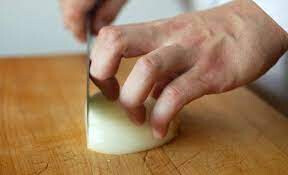 The reason for it is to be able to work quickly with a very sharp knife and still observe the rule;

Always cut down on to the board and never put any part of your off hand under the knife edge.

The knuckles become a guide that is always higher than the knife edge thus you cannot cut that hand while cutting down. If you allow the fingers to be flat the tips can be lower than the edge and you can cut yourself.

I had as assistant who was not getting the message. I asked if she wanted all her fingers the same length because the knife I gave her could do the job. I demonstrated with a chicken neck. She tried harder.

This may help explain, its called the claw grip:

Thank you… much better and easier to understand!

Is used to work in the food industry. Nail polish was forbidden due to the potential of it contaminating the food, back in the days when nobody wore gloves. Wondering if chef’s wear gloves today?

I don’t recall noticing any, even when chopping chillis, seeds and all, and putting them into a dish with their bare hands.

Now what was that old saying about if it is too hot in the kitchen?

I’m glad someone bought this subject up. I often comment about the awful long fingernails on TV chefs (and what may be lurking and accumulating under them). The other bug bear is chefs who wear jewellery, especially rings. Just disgusting.

Don’t wipe your eyes or handle your privates in the bathroom?

Generally, I’m grossed out with people wearing gloves to prepare food. I’d much prefer properly washed hands with which I trust serious cooks would agree. For those who don’t fully understand or care about hand hygiene, using plastic gloves doesn’t improve the situation.

Short nails? Yes for all the good reasons offered. Nail biting? As long as they wash them well after taking their fingers out of their mouths.

I watched Daina Chan in Diana’s Asia Unplated on SBS TV yesterday and I noticed that she actually had long fingernails and bright red nail polish, whilst her cousin had neither, as usual.

She was cutting calamari tubes into rings which is about as messy as it gets, so she presumably has her hand washing sorted.