Does anyone have experience of Chasseur cookware longevity?

These photos are of a well-used 5-6 year old casserole that has been used on a gas hob, with wooden/non-stick implements, and not put in the dishwasher - only hand washed.

The enamel became pitted and a piece has broken off, exposing the cast iron body, and the whole surface shows fine crazing.

For a premium brand, does this warrant a replacement? Unfortunately, no receipt remains. It was bought from Savage Urban. 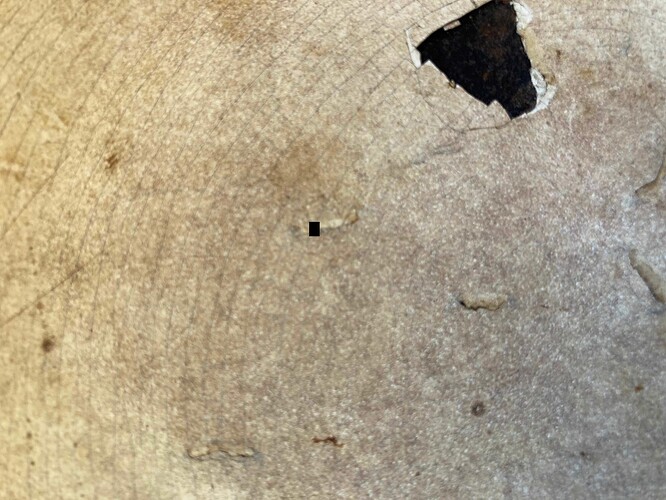 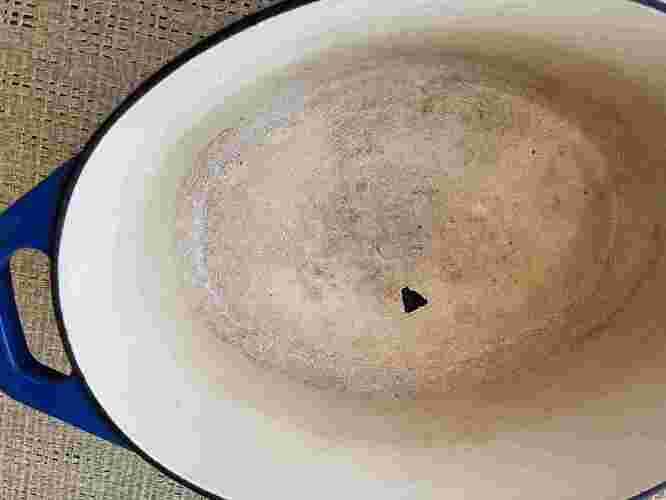 It looks like it was used with too much heat . Chasseur enameled ware is oven safe to around 250 C . A gas hob would generate more heat than that . I have a 10 year old Chasseur Dutch oven and the enamel is slightly yellowed but otherwise as new . I have only ever used it in a gas oven with the temperature never above 200 C .

It looks like it was used with too much heat .

I concur with this. The onion ring cracking of the enamel indicates the metal has expanded more than that of the enamel coating. This comes out in circular ring cracks when overheating occurs. The other reason for cracking is to have the dutch oven on the stove empty, heating it to a very high temperature leading to overheating outside the manufacturers recommendations, and then add something cold…the rapid temperature change or differential temperature caused between the iron base and enamel, causing the enamel to crack.

Has the dutch oven boiled dry or foods burnt on the base? This is the easiest way to cause heat damage (burnt food creates an insulating layer which allows the overheating of the dutch oven). The photos seem to show black marking indicating food may have been burnt on the surface.

Overheating empty, boiling dry or burning food causing damage won’t be covered by a warranty or by the Australian Consumer Law. It fits into the category of misuse which is an exempted use.

A enamel coating is generally very durable, if used in accordance with the manufacturers guide. Some cheaper enamels will stain and wear more quickly, which we have found with our Kmart dutch oven.

I prefer using non enamel like one i have become ive never found any real wayt to use enamel even on 5he lowest settling. They always get stained. My enamel hasn’t chipped or cracked. But yes i see what you mean if one uses it incorrectly. Cast iron is, excellent for cooking. Maybe some oven’s are different with settings if anyone agrees with it. And if comparing gas to electric. Whilst enamel is effective i have found my non enamel has no issues apart from lifht rust which can be easily removed following manufacturers recommendations. I certainly would not buy a, cheaper one unless wish to keep it short term. I like my lodge just my preference. Le cruset are certainly not cheap. I remember they were cheaper a, while ago.

How best to use enamelled cookware seems to vary between TV chefs.

Some brown the meat in a pan before transferring the meat to the enamelled casserole. I’ve not noticed advice against placing the meat direct from pan to enamelled cookware.

I also recollect others starting the cook off by browning the meat in the enamelled casserole.dish. Heated over a gas flame as preferred by many.

I’m not suggesting either is right or wrong or in accordance with the manufacturers product care recommendations. Le Creuset’s advice, ‘Care & Use | Le Creuset AU

The advice on use of the cookware over a gas flame is relevant to our use of any enamelled cookware. Heating only the base and not the sides on a low to moderate heat are two of the recommendations to note.

The enamel became pitted and a piece has broken off, exposing the cast iron body, and the whole surface shows fine crazing.

From Product Review: a few have found it helpful to let Chasseur know about the problem. Worth a try?

Thanks for the input, but I think it feeds into a wider issue of “How does a consumer disprove the assertion of misuse?”

Interestingly, I have a Le Creuset casserole 34 years old, showing no signs of degradation, only discolouration. 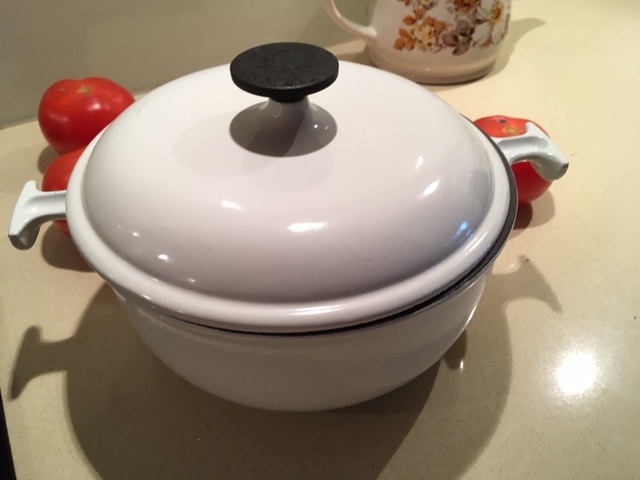 Some years ago, I had an Anolon frying pan that peeled within months, but on approaching the retailer (David Jones), was told to leave the item and they would consider the matter. In due course, I was told there was no remedy due, as I had clearly misused the item by overheating. So much for the lifetime guarantee!

I knew I hadn’t, but not having cctv and temperature monitors on my stove, I had not a leg to stand on.

Is this a frequent experience? Has any consumer ever shown that cookware can be faulty? What evidence would be acceptable to the retailer/manufacturer?

I also recollect others starting the cook off by browning the meat in the enamelled casserole.dish. Heated over a gas flame as preferred by many.

Only tonight I watched Jamie Oliver on Channel 10 searing and browning beef in his cast iron pan over a gas flame. As per the cookware permitted use.

No - I bought Le Creuset, and I’ve been using mine for the past 30 years. The griddle is showing its age, and the enamel underneath has a few stains, but t’s not life threatening. Most of the other pieces don’n even look “used”

We have been using 2 Le Creuset casseroles for more than 35 years including regular use on gas hobs and the only issue we have ever had is staining.

regular use on gas hobs

Many TV chefs, which often have products placements by companies as discrete form of advertising, don’t pay for their TV kitchen items and they are only used while a particular company sponsors the series. This might be one episode to multiple series. They don’t read instruction manuals (one often ignored is using metal utensils on items where manufacturers recommend against such use) and the TV show is about getting as much of the product (placement) in the shots. This can result in kitchen items being used outside what is recommended by a manufacturer. Often seen is placing enamel (or non-stick) cookware on cook tops, heating to very high temperature (almost smoking temperature), adding oil and foot stuffs to get the dramatic sizzle. Sizzling adds atmosphere to the cooking being undertaken.

If one follows what TV chefs do on TV instead of reading instructions and then use what a TV chef has done as justification in a ACL claim…namely that XYZ TV chef did it so it is okay…won’t stack up under the ACL. If it did, misuse of motor vehicles like that done on many TV motoring shows (Top Gear, 5TH Gear, Grand Tour etc) could be done by consumers thinking it is appropriate use of a motor vehicle and any damage is covered by warranty.

misuse of motor vehicles like that done on many TV motoring shows (Top Gear, 5TH Gear, Grand Tour etc) could be done by consumers thinking it is appropriate use of a motor vehicle and any damage is covered by warranty.

Common sense.
I’d like to se those TV presenters line up for warranty. Admittedly it’s surprising just how resilient the usually secondhand vehicles are. It’s still likely good product placement, if only to get the marque into peoples minds. And to prove a point Richard Hammond driving if I recollect correctly an English made new model McLaren had it replaced mid episode by the manufacturer after a gearbox failure with another of the new model?

It would be great to see the same attention to the use of 25 year old cookware by TV chefs.

I’d like to se those TV presenters line up for warranty.

It looks like an item of fairly good quality, which we in Australia have now been trained to consider “too expensive”. It’s the kind of thing for which it would be worth contacting the manufacturer directly, and see if they are willing to help rectify the situation.

Higher-quality manufacturers are much more responsive than the usual manufacturers that we deal with. You might find that the manufacturer knows of a manufacturing defect with a certain batch that was made 6 or 7 years ago.

I have been using one of these pots for over ten years, I do everything in it, on a gas stove, what I love most about it is that its a one pot cook from start to finish, usually ending up in the oven. It is one of my favourite things in the kitchen, I am never precious with it, was worth every cent I paid for it. It does have some staining but that’s all and I would expect it after the use I give it. Worth trying with the manufacturer, nothing to lose.

Wow I have an ALDI brand (Crofton or something?) enamel casserole like this that I got 2nd hand five years ago and have used it far beyond what it’s meant for and it’s in better shape.

I have had issues with a couple of Chasseur cast iron enamelled pots before they had even been used. The enamel was chipped when I received them straight from the box brand new. I bought them from 2 different stores. If the enamelling was as good a quality as the company states and that the price tag reflects that would never happen. I was most disillusioned with what I had believed to be premium cookware.

One external reviewer suggests Chasseur are the budget choice when compared with Le Creuset. Aside from their use of ‘French oven’ to describe a casserole baking dish it is an interesting short read.

Chasseur are described as being lighter and using 2 layers of enamel vs 3 for Le Creuset. Curiosity asks is the difference reflected in Aussie front of store pricing and half price discounts?