We were contacted on Twitter about the Aurora Energy bill charge app. According to the article, customers would be charged directly for the creation of the app as part of their power bill, but there’s a question as to who can access it.

What are your thoughts? 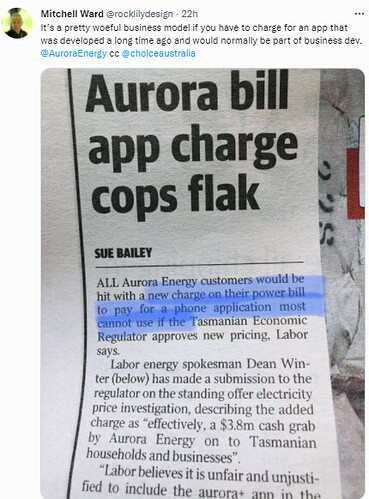 My understanding is that if you don’t use the app, and don’t want it, you can avoid paying the extra charge. Aurora+ is the offering. Don’t want it? Then don’t change to it.

What are your thoughts?

The Tasmanian Economic Regulator in its investigation-draft report stated…

This is a shift from a user pays model to include business costs in the standard operating costs through retail charges. It appears that the aurora+ app has been running at a significant loss and the change is reported to allow Aurora to continue providing the app to those customers which choose to use it.

It is worth noting that Aurora has found those customers using the app to monitor their Aurora usage and account are less likely to default on payments.

I expect the change will encourage other customers to take up the app as they will be able to use it without additional costs, as the app’s operational costs are included in the retail costs.

It is also worth noting the the regulator plans to accept option 3 for the retail cost proposal. They stated…

While some customers will be in effect be paying indirectly for an app they might not use, the investigation - draft report indicates overall they will be better off if Option 3 becomes the final and approved determination.

The article while might be right in its statement in a pure sense, it fails possibly to reference the investigation - draft report and overall impact on Aurora customers

While some customers will be in effect be paying indirectly for an app they might not use, the investigation - draft report indicates overall they will be better off if Option 3 becomes the final and approved determination.

Do you think without having to pay for an app they might not want or use they would be even better off without that charge being approved as bundled in the service?

Do you think without having to pay for an app they might not want or use they would be even better off without that charge being approved as bundled in the service?

This is standard practice for most businesses which offer use or account accessible apps. A good example is mobile phone carrier apps that allows one to see usage and pay bills. The use of the apps isn’t a PAYG arrangement and costs are included in the package rates. Some consumers chose to use the apps, others don’t. If they became PAYG, it would become even harder for a consumer to work out the best deal for them. If they become PAYG, those who most likely will benefit from the apps use won’t be able to afford to use it.

Our own electricity retailer is Tasmania does not charge PAYG for use of their account/billing app…and costs providing the app is bundled into their retail margins. Such approach is like Aurora has now decided to do. BTW, we chose not to use our retailer app.

If Aurora decided to keep the PAYG model and it was profitable, other businesses could see it as an option for their own businesses to make money - by changing from a retail operations costs to a PAYG model. This isn’t in the interests of any consumer.

Aurora in some respects is following standard practice of their competitors and other industries. As indicated by the Tasmanian Economic Regulator, all consumers will be slightly better off if Option 3 is adopted in the final determination.

$3.8M for a year? On first blush, it seems to be a VERY expensive app. Once set up, ongoing costs would be largely maintenance plus a relatively small R&D budget. This would be marginal on top of the business’ other running costs.

Aurora Energy should have to show that this charge is reasonable based on externally audited figures before it is approved.

Here in Tasmania Aurora Energy have just introduced the Aurora+ app to give customers full access to their own information that is not available via their accounts on Aurora’s website. It costs $3 a month to use the app, unlike all other bank and utility apps that are free. Not sure how Aurora can justify charging customers to access their own data

Hi @Neonlights, Choice has recently started a thread about the changes in charges currently under consideration by the regulator for the Aurora+ app. In the future the app should be provided as part of the service Aurora Energy gives, rather than a monthly based subscription like that which occurred in the past. The proposed changes are discussed above.