I recently purchased a book from Amazon’s AU site, which was the only way to purchase this particular book in Australia. When it arrived though, it had a number of printing errors between the covers. Amazon’s solution? Send it back for a full refund.

So, I jumped through all the hoops on the website to eventually get a return label that needed printing out. Normally, this wouldn’t be a problem, but the only option available was to drop the book off at one of their return sites so they could then use the label to send it back to Amazon USA, where the book was sent from, via their own choice of couriers, at their expense, even though it was a print on demand title and purchased via the AU site.

So do you think they’ve got any return sites in Tasmania? Nope. And if you live on the mainland, there’s a good chance there aren’t any near you either unless you live in one of a handful of heavily populated areas around the country. The only way I could get the book to the return site was to fork out for the postage costs to have Australia Post deliver it there for me.

According to the tracking number that Amazon gave me, the book is now back in the US where it came from, but I’m still waiting on a refund to be issued. When I do finally get my refund, I’ll still be out of pocket for the price of the postage to get the book to one of their return points with nothing to show for my troubles. It only cost a few dollars to send the thing to the return point, but still, I’ve pretty much spent those few dollars on nothing after sending the book back to them for a refund.

Won’t be in a hurry to order anything else from Amazon AU now, in case something else turns up faulty and I have to pay for more postage costs to get it to the pre-designated return point in Sydney.

Well… looks like it hasn’t been returned to the USA yet at all. Apparently the tracking entry from 29 Dec meant it was at the Australian office. It’s still waiting to leave the country according to the latest update. When I printed the label I was also informed that the package had to arrive back in the USA before February if I expected the refund to be processed. Let’s see how long it takes to go the rest of the way. 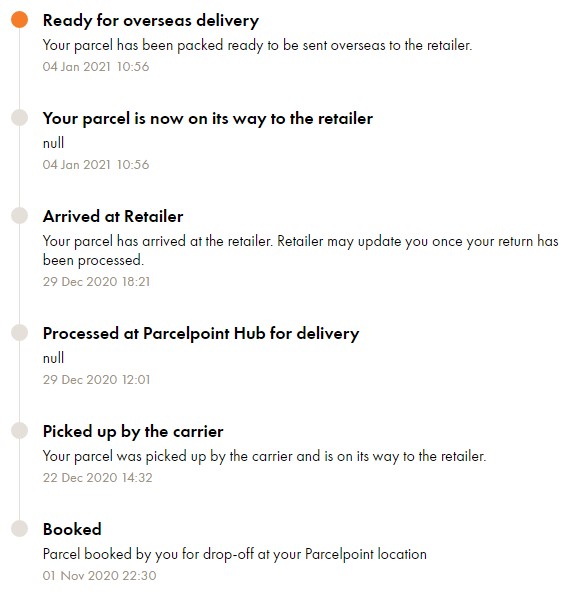 I have found this to be more so with Ebay of late, trying to find ways to contact customer support, as it is virtually non existent since COV19, trying to find a way to contact customer support, I could not find away, so I contacted my credit card company to do a credit reversal. I am also in Tasmania at least with Amazon they have not closed down their call centers down during COV19, your best bet is to call Amazon on 1800 571 894 It took me a while to find their number, so now it is in my call contacts on my phone, I had a issue with a product not being sent, and the person not replying to my numerous emails, so I hunted high and low and found the Australian number for Amazon. With Ebay I had paid for 2 lots of cartridges to be only sent out one, I was offered a return, all I wanted was the other lot sent that I paid for, in the end I thought that is not good enough, so I did a credit card reversal and got my money back

I have stored the number, thank you. Hope I never to need to use it… by continuing to avoid the Amazon plague and using other online retailers.

I know it’s too late for you, but another time you can’t find a book in Australia, you might like to try Book Depository in the UK. I bought an art book from Book Depository last year. It was an on-demand reprint, but they forgot to print some of the pictures in colour. I took a couple of photos and send them through and they apologised, refunded me immediately, and didn’t need the book back. They are great for all sorts of things like calendars and music scores too and have managed to deliver to me all through the pandemic. I have had several problems with Amazon Australia and tend to avoid them if I can.

Thank you - I didn’t know that. But I’ve got no problems with Amazon US or Amazon UK, both of which have been very useful when I can’t buy things locally and have been terrific over the years for their customer service. It’s just the Australian version that has been such a disappointment.

Finally got the refund today, for the amount originally paid to them, which leaves me a few dollars out of pocket for the postage costs that I had to pay to get the thing back to their drop off point on the mainland. Don’t think I’ll be utilising their services ever again after all that. It’s only a few dollars, but it’s a few dollars I had to pay because of their stuff up, and pretty much a fee I’ve incurred for getting a refund on a faulty purchase that needed to be returned first.

Send them a request for the postage, the postage is claimable under ACL.

From the ACCC on ACL rights: