We’ve reviewed almond milk and found the almond content can be quite low for some brands. We also looked at:

Find out more in our article: Almond milk is increasingly popular, but are you getting your money's worth? We review and compare the almond content of popular brands and a homemade sample.

We’ve had an interesting report from Melissa who got in touch over Facebook. She’s an almond milk drinker and noticed something a little dodgy with the So Good variety she bought the other day:

“I purchase almond milk for myself due to being lactose intolerant. I normally buy a fresh almond milk from the fridge section at Costco (brand is Inside Out), but the other day wanted to buy some almond milk for work so picked up a So Good Unsweetened Almond Milk from the fridge section of a supermarket as it was on sale. I noticed that the expiry date for the So Good one was significantly longer than my usual brand - So Good expired in April, where Inside Out & other fresh almond milk brands I’ve purchased (eg Nutty Bruce) have an expiry of about 1.5-2 weeks, similar to fresh cows milk. I asked So Good why this was the case via Facebook PM. Firstly they didn’t answer my question (responding that UHT has a longer expiry bc it is made differently), then when I clarified that I do not believe their almond milk in the fridge section really is fresh, they just responded that it was, with no explanation. It seems such a big discrepancy and I feel that they really are selling UHT almond milk but just labelling it as fresh so that they can charge a premium for it.”

We had a look at the ingredients for both the chilled and non-chilled varieties of So Good unsweeteened almond milk and they do vary slightly (more preservatives in the non-chilled variety) but not much. We noticed that the label does not say it’s ‘fresh’ only ‘chilled’ so we’re sceptical - as Melissa is - about the freshness of (and paying a premium for) this variety of almond milk. Storing it in the fridge seems like a nice opportunity for Sanitarium to cash in on the increased demand for fresh almond milk.

Melissa got in touch with Sanitarium to try and get an answer and received the following: 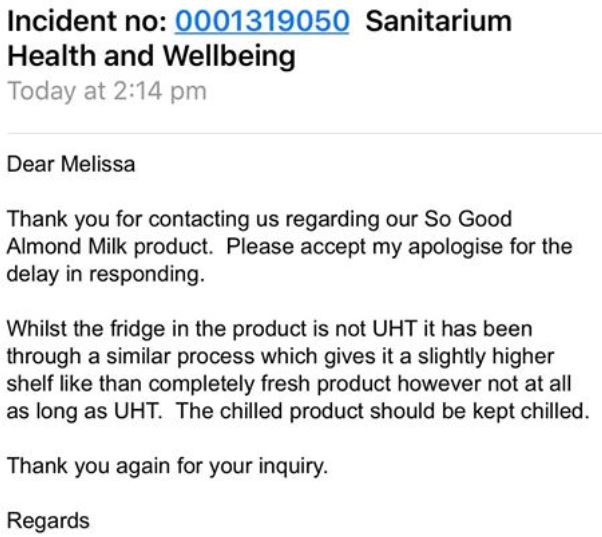 thought I should share this info for any almond milk drinkers out there! Let us know if you’ve had a similar experience.

Could it have been pasteurised rather than UHT treatment thus extending shelf life but not as much as UHT treatment? Why not then say it is pasteurised and not hide behind ambiguous terms like the “similar process”.

Could it have been pasteurised

It’s a possibility!
Either way, the communication Melissa received from Sanitarium was pretty terrible. Don’t think she’ll be buying that almond milk again in a hurry.

A concerning article regarding the almond milk industry.

Copping criticism when you order an almond latte? This could be why

Next time you're thinking about ordering an almond latte, it might be worth considering how eco-friendly that particular plant-based choice really is because the nut's production and environmental impact is under hot debate.

Coping criticism for the content of my hot drink? Well of course this is a problem. I spend my day breathlessly waiting for strangers to put in the slipper because my choice in refreshment is ideologically unsound. You have to watch out, the gulags await the incautious sipper.

I have tried it once and don’t plan to try it again.

I love almonds, but find almond milk not a very palatable substitute for real milk.

not a very palatable substitute for real milk.

And apparently not an enviromentally friendly one.

I have tried it once and don’t plan to try it again.

I love almonds, but find almond milk not a very palatable substitute for real milk.

For water intensity almonds are up there with rice.
10-12Ml per hectare.
Interesting choice - almonds (3t/ha) or rice (10t/ha)? 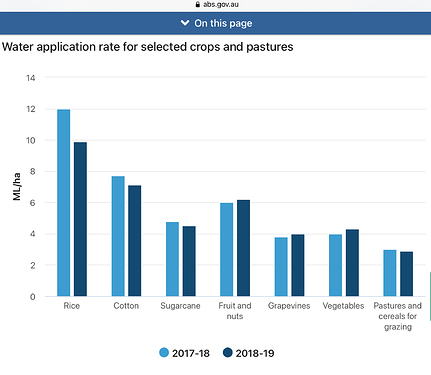 Obviously why rice and not almonds are the staple diet of a large percentage of the global population.

Obviously why rice and not almonds

Not obvious why Almonds and not rice or wheat or …

Almonds are 10-20 times more valuable than rice.
And,
Growers only need to wait 3 years for the first crop, which usually earns more than the costs of establishment (land purchase excluded). 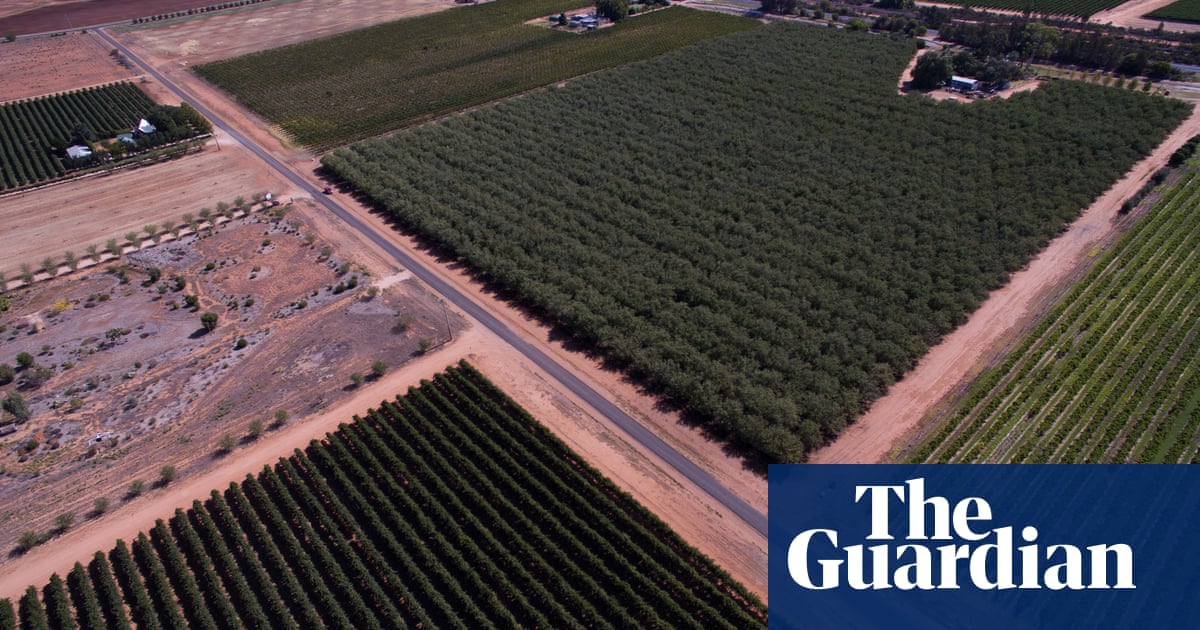 Tough nut to crack: the almond boom and its drain on the Murray-Darling

Macadamias grown locally need typically 6-7 years to start producing and 11-12years before recovering all establishment and maintenance costs. Water needs are modest when grown on the coast, where they are native.

I have a couple of almond trees here, and they do produce a good number of nuts, although swarms of Cockatoos get most of them. I’ve calculated that in 2020 they had water equivalent to 10.6ML/ha, which does sound like a big irrigation requirement, however, it all fell from the sky!
If all that water had to be supplied from a river or bore, then perhaps the almonds are being grown in the wrong place, much the same as rice in the Riverina, where it doesn’t rain enough to grow rice without irrigation.
I do enjoy quite a bit of organic almond (also rice and soy) milk, and prefer all 3 over cows milk.

then perhaps the almonds are being grown in the wrong place, much the same as rice in the Riverina,

Definitely the wrong place, as they apparently die if not irrigated, (not really, they just don’t produce so it may suit the industry to say so). The irrigation demands on top of any rainfall are typically 10-12 Ml/ha. IE 1400-1500mm total natural annual rainfall assuming it all comes at the right time of the year. Rainfall Mildura way averages less than 300mm p.a.

There were 772 million reasons 2019-20 why Australia exports so much of its valuable water, ($772M value of exported almonds).

Most of the Aussie crop is not grown for domestic consumption. It is exported. Current plantings will increase annual production by 50% to 160,000t pa.

it takes 5 times as much water as hemp ,5 times as much fertilizer than hemp,it ll goes to China and largely grown by Chinese companies,I was a farmer in the UK on much better soil yet all the trace elements were being drained,
They grow the almonds to 16 liters of water for one nut ITS A CRIME
BAN ALMONDS

Please explain how it takes 16 l of water per nut. Is this in all conditions or just in deserts?

I cannot see that banning any particular product is sensible or reasonable. A better approach, which also covers other thirsty crops like rice and cotton, is to have a functional water market so that commercial decisions include the real cost of resources.

Hi @oger and welcome back

I have moved your post into the thread about Almond Milk that contains the posts about the cost of producing those Almonds.

I understand the first part of your post is about Cotton growing, you might like to post about your concerns in the topic Water Security, Murray Darling Basin which starts with a post that notes the large use of water in the growing of Cotton.

Please explain how it takes 16 l of water per nut

From the article I posted above.

A concerning article regarding the almond milk industry.

“A single almond needs about 12 litres of water to grow”.

From the article I posted above.

OK the figures behind the article come out at about 12 l per kernel but not 16.

My comment is still very relevant - that banning one product is hardly sensible. Creating a proper resource market is the way to go.

The linked article also points out the fallacy of saying because x amount of water is employed producing a given crop that the water applied has no other use, that somehow it disappears and does nothing more.

The argument that the profit all goes overseas has been around in various contexts since Adam was in short pants. Like so many other such patriotic propositions it asks the next question: if growing almonds is so profitable why do not more locals do it, why do they sell their land and water licenses to outsiders instead?

If you want to control who runs each industry and which industries are favoured over others you need a command and control economy. Just like the Chinese. But we don’t want to do things their way! Confusing isn’t it.

Perhaps the answer is that having collectively allowed (or is it designed?) the Murray Darling Basin Plan to be a complete shambles the Feds and States are now seeing more than one perverse outcome.

I saw on an ABC program that a dairy farmer was paying an exorbitant sum to have tanker trucks delivering water because he was denied extraction even tho the water flowed past his farm, There were cotton and almond wars in the us during the sixties