The Future of a Changing World Energy Market

The majority of Australia’s energy needs come from imported petroleum products. They are also responsible for the largest portion of Australia’s Green House Gas Emissions.

I don’t think either of those statements are right, do you have a source for it? IIRC it is true of the transport sector but not overall.

I don’t think either of those statements are right, do you have a source for it? image1224×757 163 KB
For reference, just as there are quarterly and annual national accounts published for GHG emissions, there are annual reports for energy.

From the executive summary on energy consumption in Australia.

On GHG emissions while electricity generation as an industry is the largest single source of GHG (coal and gas) oil/petroleum products are more widely used, mostly in transport and the other sectors. There are more complete breakdowns of where within the referenced document.

Re the GHG emissions from oil/petroleum products consumption is mostly spread across three sectors, Transport - Stationary Energy - Industrial Processes. These account for 44% of emissions the majority of which are from oil. There are some from gas use and a minor amount coal. Apologies, this is indirect. I’ll post a more direct comparison of emissions by fuel type when I have time.

P.S.
Really not for this topic. @PhilT might be able to shuffle this and the last few posts to where they best fit.

The graph of fuel consumption says to me that petroleum (the majority of which is imported) is the largest component of energy use but not the majority. My guess is about 2,400 PJ out of 6,000. You are quite right that coal has been declining in recent years.

The NGGI inventory shows the sector generating GHG not the type of fuel so whether imported petroleum is responsible for the greatest proportion of emissions I cannot say.

(the majority of which is imported)

My bad with the sloppy use of ‘majority‘. I should have said ‘largest portion’ or similar phrase. I’ve made a short edit and note to the original post to correct.

It would have been more readily evident if I had posted the linked additional references.

Community discussion around electricity pricing and increasing use of renewables typically focuses on concerns with coal as a fuel.

It’s less evident in the public discussion that nearly 2/3 (64%) of our primary energy needs come from oil and gas. Approx 6% is produced by renewables, mostly wind and hydro.

An interesting article regarding the future of energy.

According to the International Renewable Energy Agency, countries that have the ability to take advantage of new renewable energy technologies can expect to enhance their global influence and reach in the future.

And it has singled out Australia as a potential new energy leader.

“Countries with high technical potential for renewable energy generation stand to gain if they are able to become significant exporters of renewable electricity or fuels,” its report said.

“Australia’s economically-demonstrated solar and wind energy resources are estimated to be 75 per cent greater than its combined coal, gas, oil and uranium resources.”

We need also to consider what we should be able to do within our borders, to circumvent the sort of problems that the current pandemic has exposed:

The first solar panels we were involved with back in the late 1970’s were Solarex, designed and made in Australia.

They were the market leader in 12 VDC panels in Australia for many years but they obviously dropped by the wayside in recent decades.

I posted under that topic as it seemed the closet match without creating a new topic.

The ideal topic would have been Renewable Energy but @PhilT closed it and a suitable alternative topic has yet not been created.

Is that what’s proposed? The term biomass generally refers to fibre. Usually lignocellulose. The project in question involves using all parts of the agave, but burning the fibre as a transport fuel isn’t one of those uses. The fibre could be converted into liquid fuels, but that isn’t proposed at this stage.

Perhaps someone could create one and move my post and the replies there.

For context, Australia’s three dominant fuel sources with usage referenced to fuel source and emissions, rather than industry/sector. Note that the Federal Govt does not provide a report on the basis of fuel source. The chart had been produced by Climate Analytics, from Govt data sources.

It includes an assessment of future emissions assuming Australia retains an economy that is a substantial user of oil/petroleum products. The assumptions behind the forecasts are contained within the linked report. 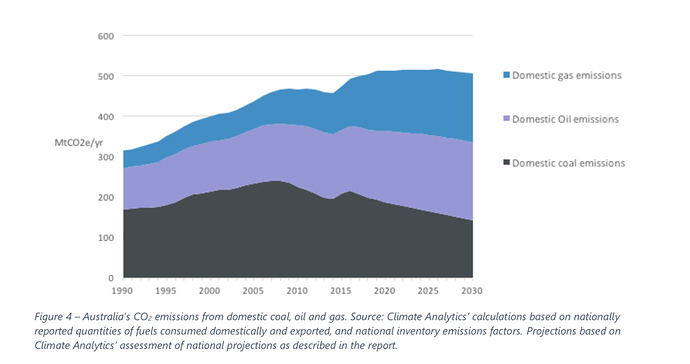 An article recommending that Australia wake up and increase our oil reserves at bargain basement prices.

I doubt it is going to impact present pump fuel prices, other than a possibility they may go up to help pay for the costs of establishing the reserve.

If only there was somewhere to store it all? Anyone got room in their backyard for 100million 205l drums of refined product?

Note:
Best done as crude rather than refined product. It is possible, site dependant to refill underground space left from prior oil extraction. Australia has also reduced it’s refinery capacity, as noted in the article. Did they mention how much we might need to store in the news item? A second question unanswered is who is going to fund the costs of transport and storage. The consumer after the event, the tax payer up front, or the oil companies? If it’s strategic the answer will be the tax payer in the long run.

It remains a great thought. You can only ask why it didn’t come with some more complete informed analysis. The ABC is tight for cash, might be a part answer.

We are also free to consider how important this is short term, when the world energy market and Australia’s needs are to move away from hydrocarbon fuels.

If only there was somewhere to store it all?

You’re saying we don’t? I’d be interested to see your substantiation.

As a member of the IEA we are required to maintain net stocks equivalent to 90 days of liquid fuel. Australia is currently in breach of that obligation.

The recent liquid fuel security review conducted by the Department of Environment and Energy in April, 2019 indicated that Australia has a current reserve of 18 days of petrol, 22 days of diesel and 23 days of jet fuel. These low fuel reserves put us at significant risk.

We’re already in breach of our IEA obligations by not holding the reserves. Do we really not even have the storage capacity to meet our obligations?
[edit]

Best done as crude rather than refined product.

Do we have the necessary refining capacity? If so, in an emergency, would there be time for the refining?

Did they mention how much we might need to store

As quoted above, 90 days supply. The Department of Environment and Energy will have further details.

If only there was somewhere to store it all?

It’s a question.
Perhaps you know the answer?

Do we really not even have the storage capacity to meet our obligations?

Possibly the same question with the answer in the same place.

Evidence presented to the Senate in 2018 suggested not.

Fact check: Does Australia have 3 weeks of petrol in reserve?

How much fuel does Australia have in reserve?

Yes, 90 days of … dissection available Dept of Industry, Science, Energy and Resources. Measurement by volumes and months, not days.

This includes details of our monthly imports of refined product as well as crude used in local refinery production, for those interested further.

The Department of Environment and Energy will have further details.

Yes, they would have, but were vaporised as of 01 Feb this year. We now need to check the above linked web sources at the Dept of ISE&R or newly amalgamated Department of Agriculture, Water and Environment.

Perhaps you know the answer?

The Department of Environment and Energy will have further details.

Department of Agriculture, Water and Environment.

If we don’t, then our government has screwed up monumentally.

Yes, they would have, but were vaporised as of 01 Feb this year. We now need to check the above linked web sources at the Dept of ISE&R or newly amalgamated Department of Agriculture, Water and Environment.

If we don’t, then our government has screwed up monumentally.

YES!
But I don’t want to drag us off topic.

So you’re saying that the information has disappeared?

Events have progressed. I’ll not comment on the details excepting

Federal Government to spend $94 million stockpiling fuel in the US

The Federal Energy Minister announces the Government will spend $94 million on a fuel reserve to bolster the national stockpile.

According to tonight’s Nine TV news, the last time Australia met its IEA fuel reserve obligations was 2012. As @mark_m implied, we now don’t even have enough storage capacity. What changed after 2012?

Might explain apparent obfuscation of the data (by “reorganising” relevant department[s]).

Is a stockpile that isn’t even in the country really strategic?

Getting back on topic, one way to address the strategic reserve issue would be to reduce our reliance on imported liquid fuels. Developing Australia’s abundant renewable energy resources would be a good start.

[edit]
Speaking of which:

It’s not by chance that the two states in Australia with the most ambitious renewable energy policies – Tasmania and South Australia – are the ones without a coal industry in their backyard.

And that probably explains the second, more surprising observation, which is that both the Tasmania target – 200 per cent renewables by 2040 – and the South Australia target – net 100 per cent wind and solar by around 2030 – have been set by state Liberal governments. Both states have grand ambitious to be significant exporters of excess renewables output.

Are there forecasts of how future energy needs will be met?

If Australia chooses to become a net exporter of energy or energy intensive products average annual investment will need to be much greater than 5% of GDP.

ARENA assumes a straight line reduction in GHG emissions over time. Typical technology change follows an ‘S-curve’. EG similar to how the Corona Virus infection rates come down. Slowly at first, before a rapid decline and long tail.

Nothing in the ARENA forecast envisages a ‘natural’ gas led recovery. Hydrogen is a critical part of the model. Biogas (BECCS), CCS and CCU are also part of the forecast.

Currently Australia does not have an equivalent forecast or plan for comparison.

This preview presents options to limit global temperature rise to 1.5°C and bring CO2 emissions closer to net zero by 2050. It offers insights on technology, investment and socio-economic contexts for a sustainable and inclusive energy future.

The full document is available to download from the linked summary. It’s approx 50 pages, with short direct points and numerous easy to follow graphics. Table 3 on page 14 offers a single reference point of now vs 2050.

Australia’s energy consumption profile is similar to the global average, but with a greater intensity per capita/GDP. This suggests more than the global average is required of Australia to be able to transition at the same rate of change as the rest of the world’s nations.

Currently Australia does not have an equivalent forecast or plan for comparison.

AEMO’s Integrated System Plan might have some of what you need.

The Integrated System Plan (ISP) is a whole-of-system plan that provides an integrated roadmap for the development of the National Electricity Market (NEM).

@Drop_Bear. Is that you in this photo off the ABC website?

Must be a relative.