Perhaps mounts and visually directed guidance should be banned, leaving voice direction the only accepted option?

There is probably at least one pollie reading. DO NOT GIVE THEM MORE REVENUE RAISING IDEAS! Please don’t. ‘No talking in vehicles unless parked with the key off’ ?

Our 512+ pages of road rules are already beyond what most of us can digest let alone keep track of as new and changed rules happen annually, often without more than the bare notice. Also, never venture into another state without reading their versions

Update: I bought the Belkin unit from JB HiFI for ~ $35. I installed it up the other way - suctioned onto the dashboard on a smooth shiny base that was still stuck on the dash from a previous holder that had come & gone :). It looked like it might do the job - not for my main phone which is in a fold-over case, and with the cover folded to the back, it’s too thick for the claws to grab it, but for my work phone, which is just in a protective back cover. If it was left in the holder all the time it might have been ok, but it was tricky trying to pull out the movable sprung side to try to get to get the phone in the bracket every time you got in the car. Then, a few days ago, the holder lost its grip on the base and fell into the driving well while I was driving … I guess I’ll just stick it back on again and only use it when I really need route instructions. I could try the Belkin vent model as they seem to work well for “consumer”, but I have tried several vent models from Aldi and they either didn’t fit the vent gap, wobbled around too much, and also blocked the vents too much. Maybe the Belkins work better … 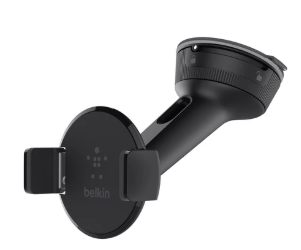 I prefer a mount which is on the air vent. Reason being that I use phone for GPS navigation from time to time, and when I do, the phone gets hot. I want the a/c to cool it. Works well.

I bought one on eBay which looks identical to the Kogan Moki. It works the best of all the ones I have bought over the years. Bluetak doesn’t last and lets go at the most inconvenient moments.

Me too, [edit: actually not. I was sure the last time I bought a holder it was like a MOki but mine was not this kind]
but bought it years ago at huge expense from a purveyor of phones. Cant remember its name, started with a K.

Remembered! It was a Kenu, and here it is (though mine is a grey colour) https://www.kenu.com/products/airframe-plus

We’re planning a new test of smartphone holders for cars.

We’ve identified three main types of mount: suction cup for the windscreen, sticky pad for the dash, and clips for an air vent. We probably won’t buy more than one of the air vent type, as we believe the other types are more popular ( and vents come in so many shapes and sizes ), but our researchers haven’t yet confirmed that for us.

So, I’d be most obliged if you could answer a few questions for us:
Have you purchased and used this type of product within the last few years ? If so, how was your experience, and what type do you now use/recommend ? Why ?
If you’ve not used one before, which type would you be most keen to try, and why ?

We’ll be looking to capture the range of phone sizes that each holder can accommodate, how easy they are to use, and how well they stand up to exposure to heat.

If you have any other suggestions for what we might include in the testing, I’m all ears ( or eyes ).

Our budget has limits, so some tests, e.g. building a rig to generate lateral forces to try to force a phone out of the holder ( simulating aggresive cornering or swerving to avoid an animal &c. ) are already out of scope.

Thanking you in anticipation,
Scott.

I had an early suction mount. The only reliable location for it was the windscreen. In the Falcon it was too far away to be useable. On really hot days it lost suction, especially if mounted in the cool of the morning. Think 45C in the shade, road trains, dust and stray camels on a corrugated dirt road. Perhaps more a stress test than everyday.

We recently acquired a vent clip on mount design (Cygnet brand). It provides a great option for the driver’s side air vent (to observe only). It tended to get in the way of other controls if mounted on the centre air vents on our vehicle.

Suggestions for testing suction mounts would be to try them on a vibration rig with a slightly curved glass warmed with a IR lamp post mounting. How many G’s can the mount handle with standard test weight/s.

For the vent mount, the greatest fear is damaging the vent vanes. Our aged Toyota appears to be well engineered in that department.

Our current mount has a spring loaded slider arm (cradle) to hold the mobile captive. The wider the phone the greater the effort required to expand the opening. Not necessarily a good thing if the vent vane is stressed unintentionally when placing or removing the phone. It may be worthwhile reporting on the range of the width of phone accommodated. My iPhone 8 which has a basic and relatively slim Goosperry case with rounded edges is almost too thick to be held securely. It may also be worth assessing the maximum thickness of any device accepted and the security with different profiles of phone case. 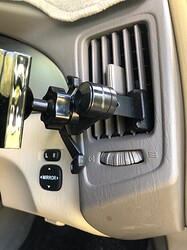 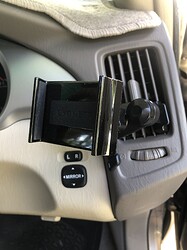 P.S.
It’s difficult for my fat fingers to clip the mount on and off the vent if there is a phone in the cradle.

Where should I mount my mobile phone or GPS?

It sounds self-explanatory doesn’t it? But the question in regards to where you should mount mobile phones or GPS on your car’s windscreen is one that comes up quite often so let’s take a closer look at it.

I liked my Kenu and I havent the foggiest notion of where it is. I almost never need to have the phone working in the car, unlike when I was a) employed or b) into distance driving. Dn’t need it when I go to the shops. All that said I would use that style of vent mount again should it be required in future. I found that suction mounts were pretty much useless. They would fall off in extremes of heat, but apart from that, would jiggle about like old drunks, making the phone useless. The other thing about vent mounts: cooling a phone that is gettng hot because you’re using a nav app.

Thank you to those who have responded. We now have a selection of products that have been purchased and testing is underway. The test is running concurrently with a test of Car GPS Navigation devices and Car GPS Navigation apps, so it is estimated it will take around a month.