Singapore Tapis crude oil prices ……has gone from a low under $33 in August 2020 per barrel to just less than $85 at the moment. 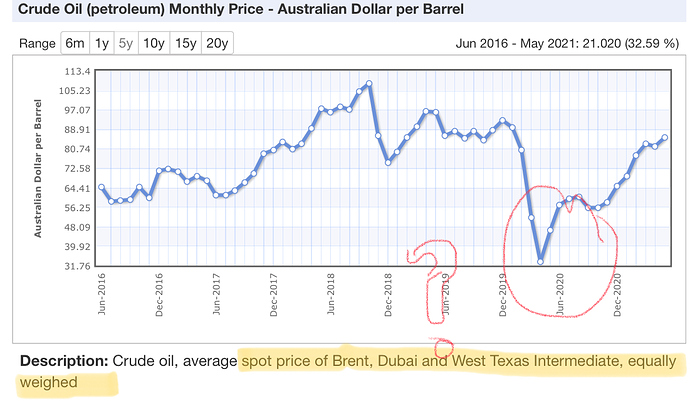 The one linked is an equal weighted average of three spot markets. It is not the same as the Singapore price base used for Australian fuel.

I can’t follow how a change from $33 more than 12 months prior in April 2020 can account for the recent fluctuation as due to the price of crude.

It’s worth noting that other than the brief dip in April last year crude from late 2017 up till that date was more expensive than it is now! Albeit that we are not looking at the Singapore pricing in isolation.

The ACCC looking at the latest 3 months tells a different story. 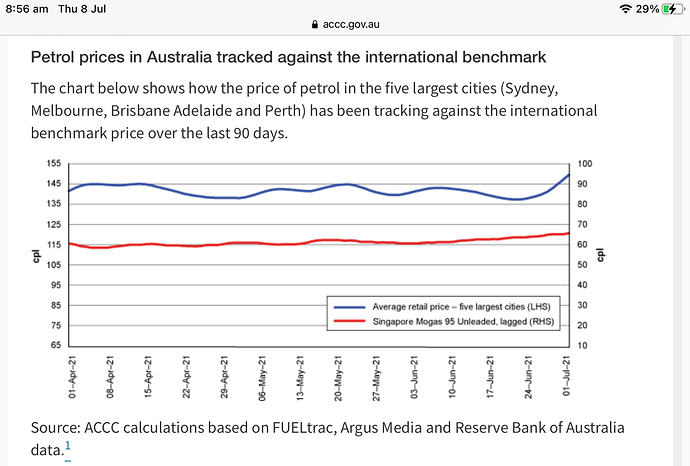 Do you have a different source? 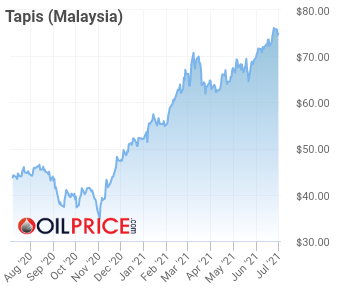 Price cycles are the result of deliberate pricing policies of petrol retailers, and are not directly related to changes in wholesale costs.

The increase in petrol prices from around a $1 mid 2020 to around $1.50 today can be explained in part due to the almost three fold in Tapis crude oil price.

I think we are talking about 2 different things.

I was not referencing long term price changes, I was comparing the daily prices and ‘cycling’ at Costco versus branded (major and minor branded) outlets.

I think we are talking about 2 different things. The wholesale price of fuel is affected by Tapis oil price, amongst other things.

I think so too. There is little as might be implied in the longer term wholesale pricing to support the sudden recent jump in retail pricing.

A more detailed point of comparison weekly variances and and previous trends. It might help to seperate the two.

It is interesting the Petrol Price Minus Tapis Crude Oil price is around 5c/L. As daily fluctuations are often greater than this, it suggests at time petrol is sold potentially below cost, while other times, significantly more than 5c/L above cost.

The RACQ is complaining about fuel prices in SEQ.

Great to see the Deep North getting a fairer deal than BrisVegas.

Great to see the Deep North getting a fairer deal than BrisVegas.

Motorists filling up the tank today will be hard pressed to find fuel under $1.70 per litre as petrol prices peak, but experts say holding off just a few days could save your back pocket.

Meanwhile, back in the Deep North.

Motorists filling up the tank today will be hard pressed to find fuel under $1.70 per litre as petrol prices peak,

It’s still not $2.00 per litre for those who remember back 15 or so years. Enough to make one line up for an alternate fuel vehicle. BEV or PHEV anyone?

Whilst I can’t comment on the prices in Cairns, in other places the standard unleaded was around $1.80 and the premium variety around $2.00.

More fun and games, and an eye watering price even with the cut in excise. Why is petrol still so expensive in Queensland? When will fuel costs go down?

With fuel prices nudging $2.20 a litre in Brisbane, a tank of petrol can put a sizeable dent on your bank balance, so why is fuel so expensive in Queensland and when will prices drop?

Is this price gouging by the fuel companies, or the economy catching up with us?

Prices out west we’re still around the $1.80 mark, slightly more on the prime highway sites. Although for many of those locals diesel rules.

The 22 cpl temporary reduction in fuel excise on the wholesale price of petrol is set to end from 29th Sept. The ACCC has a role to play on behalf of consumers. It has been reminded that the excise is on the wholesale cost of fuel and not the retail. Hence fuel stored in servo tanks on the 29th should still be sold at a lower price until stocks are used up. 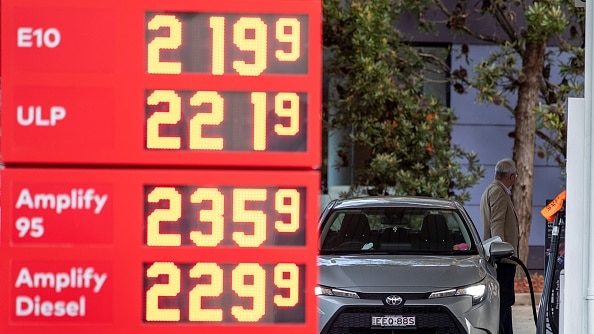 As 22 cent fuel excise hike looms, the competition watchdog is ordered to...

As the end of a temporary halving of Australia's fuel excise draws near, the ACCC is ordered to watch for fuel retailers seeking to take advantage of the hike.

The petrol companies are no strangers to being watched. Perhaps the reminder from government has come too late? Perhaps the fuel companies have a cunning plan?

It’s not yet the 29th. A preemptive move by the petrol companies, or just business as usual? The difference up to 40 cpl Friday afternoon. In one instance personally observed the same chain priced U91 153.9cpl (I took advantage) if heading south or 3km down the road heading north 193.9cpl. Just out of the PetrolSpy screen shot but evident from their competition. 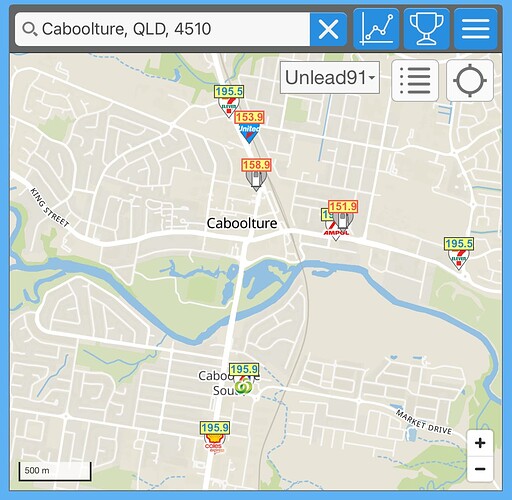 Are the large chains already adjusting their pricing in part to avoid the ACCC being able to take any action based on an undue increase on the 29th Sept? Hopefully the ACCC is doing more than just watching. Certainly the leader of the Opposition in the Federal Parliament will be well aware. He lives just over the hill.

Will any in Federal Parliament even notice?

It’s not yet the 29th. A preemptive move by the petrol companies, or just business as usual? The difference up to 40 cpl Friday afternoon.

This move was always likely to happen. Something different to regular price hikes is that the spike is happening in all five mainland state capitals at the same time.

Will any in Federal Parliament even notice?

Due to self interest i.e. criticising the government, opposition MPs might. For others, only if a relative who doesn’t have a government issued fuel card advises them.