What makes a potato microwaveable? 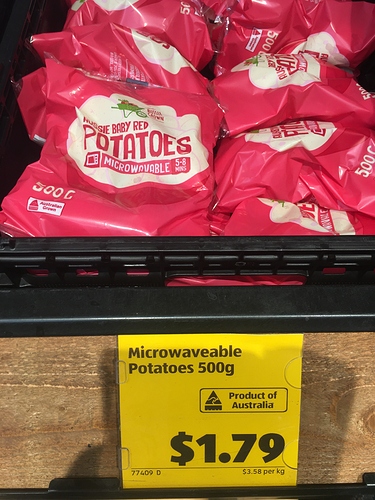 Any views on whether there would be a significant difference between them for microwave cooking?

I usually microwave small potatoes whole and cut larger ones into halves or quarters.

Any views on whether there would be a significant difference between them for microwave cooking?

No difference except for marketing spin.

I am not one to microwave potatoes and prefer them boiled or roasted.

The only difference would be if there is a significant variation in moisture content. AFAIK there is no such variation and so this is just a selling gimmick. I have nuked all kinds of taters and not noticed any difference. The flavour does not develop like roasting because there is no browning but that is the same for all.

We nuke ours unless we are boiling them to mash. Also often prior to baking as it gives them a head start and the oven isn’t on for as long heating up the kitchen. They still taste great.

A friend showed us that you can even microwave large whole spuds successfully, if first you skewer them multiple times right through the body in random places. This lets the steam created escape and prevents the potato self destructing. Washed and brushed with the skin on they hold the flavour and taste great with your favourite dressing, EG sour cream and chives, melted cheese/s and tomato sauce for the kids, or chilli jam/sauce for those who seem to need chilli before food is considered to be other than boring and tasteless.

P.S.
When are potatoes going to be sold with the real variety name boldly on display?
Jamie Oliver last night kept promoting a particular variety I’ve never heard of.
I’ll never be able to cook like Jamie Oliver if I can’t get those potatoes.

We buy brushed potatoes from the supermarkets such as Sebago or Dutch Cream, peel them, cut length ways into 4 pieces, place in a covered container with some water, and microwave until soft.

We then drain them, brush with a little olive oil, and cook in the air fryer.

Like a lot of product, when it is sold in the smaller quantities the price per kilo goes up the smaller the amount. The person buying is paying for the “convenience” and not the product. Buying in bulk often reduces the cost per kilo…often brushed potatoes can be purchased in the 4 or 5 kilo bags cheaper than the loose or the 1 and 2 kilo lots per kilo.

The pricing may incorporate the additional labour bagging up more of the small quantities, the cost of more packaging per kilo and other obscure costs that just add up to a “convenience” factor ( whatever that may be). This is where unit pricing can save big for the purchasers.

Like a lot of product, when it is sold in the smaller quantities the price per kilo goes up the smaller the amount.

True, but with smaller potatoes, it is likely that they would not usually have a big market and in the past have been sold to meet small demand as salad potatoes or baby potatoes (if right variety). Many smaller potates become fodder/farm waste as most consumers don’t want small ones (peeling them can be tedious)…and neither do the chip factories (chips would be too small) or other potato processors (as there is more waste per unit when peeled dipie to higher surface area per unit).

Being a potentially unmarketable and discarded product, one could also argue that they should be cheaper as it provides a new market for consumers to buy it. A bit like straight bananas or not so perfect carrots.

Coles and Woolies sell them as a convenience product often with butter and herb in a ready to microwave package. The price for the 8 or so potatoes is at a high price ($10 per kg unit pricing):

Being a potentially unmarketable and discarded product 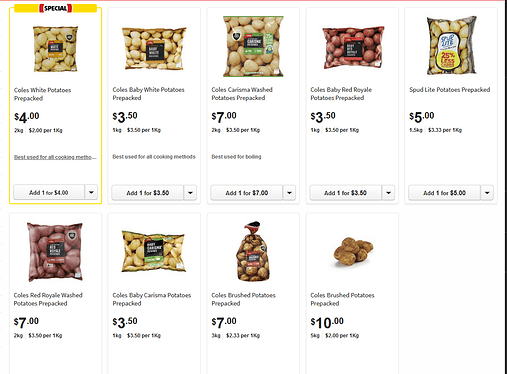 An American rellie who is seriously challenged by conventional cooking appliances such as cooktops and ovens excels with a microwave. She has no troubles making microwaved baked russet potatoes. The closest local potato is the Mayan Gold, much smaller but otherwise similar.

You Can Microwave A Baked Potato Before Your Oven Even Preheats

Why turn on your oven when you don't have to?

The message is you can microwave any potato if you follow the most basic microwave rules.

A friend showed us that you can even microwave large whole spuds successfully, if first you skewer them multiple times right through the body in random places. This lets the steam created escape and prevents the potato self destructing.

good to know. I’ll try that.

When are potatoes going to be sold with the real variety name boldly on display?

I seem to remember that Coles and Woolies used to do that and the signs also provided info about texture, best uses, etc. but I don’t think they do so anymore. Wonder why? Maybe there were supply problems? I thought this info was very helpful and did try different types.

I don’t think they have shelf signs anymore, only some recommendations of the bags of pre-packed spuds.

They probably stopped when they reduced the range of loose potatoes.

I don’t think they do so anymore

Our Coles labels them as variety and general uses, and has a wider variety than Woolies; Woolies doesn’t label what they are at all.

Like a lot of product, when it is sold in the smaller quantities the price per kilo goes up the smaller the amount.

Unfortunately the bag sizes being different mean it is impossible to assess whether any or all of the higher unit price reflects the use of the word microwaveableto differentiate/“brand” the product from others. However, I would have thought that it has the potential to allow this.
It’s a pity that the practice may result in some people thinking that this is the only microwaveable potato, which as others have noted, is not true. .

Unfortunately the bag sizes being different

Hi @ijarratt, just wondering if it is possible to get a photo of the two bags. Being in Tassie (we are yet to be invaded by the private German company - and are unlikely to due to its expansion approach), it is not possible to see what the two products look like.

We pretty much only microwave our potatoes now (except when we are steaming mixed veggies). We use any sort that is on special and they all come out fine. Leave unpeeled, prick holes in two sides with a fork. Sprinkle some pepper on them and drizzle some oil on top. Cook on high uncovered for around 5 or 6 minutes depending on the size and quantity, then turn over and cook for an additional 5 or 6 minutes.

Here are photos of the fronts and the backs of the 2 bags.
The instructions on the “microwaveable” potatoes bag assumes that they will be all be cooked in the bag in the microwave at once. 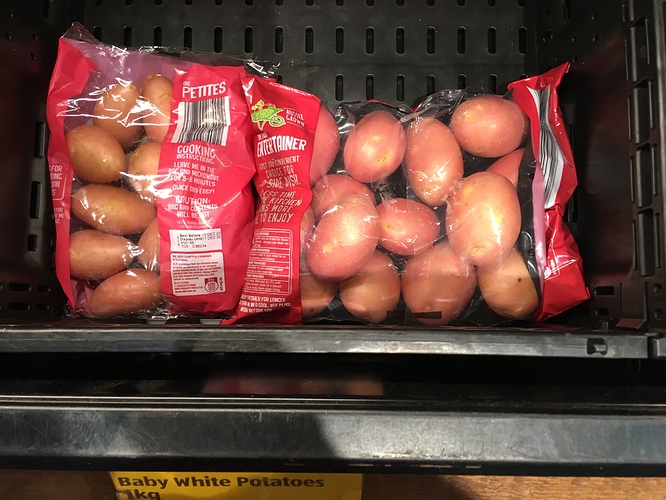 Without getting out a micrometer, visually they appear to be the same spuds in different wrapping…while a leopard can’t change its spots, it can wear different coats.

The beauty of marketing with advertising flair. Perhaps ‘microwavable’ is about the package not the potatoes?

It’s an added value product, you are paying the extra for the convenience/packaging for a ready to cook product.

For most of us I think we would just buy the larger bag and save, there would be others happy to pay for the smaller bag so they could just cook and eat the contents and have no leftover.