What are the worst bank fees?

Fees are worth hundreds of millions in revenue to banks. With penalty fees reportedly on the rise, we’d like to hear about the worst bank fees you have encountered.

Whether is is an account fee or a late payment charge, let us know the amount of the fee and the product involved in the comments below.

If you’re willing, I’d be interested in hearing some particular examples. I know there are a bunch of accounts with both avoidable and unavoidable account keeping fees. I’ve also heard of some particularly astronmonical fees associated with mortgage packages

Student savings account fees - once you hit a defined age (with CBA at least) they kick in, silently in my sons case. When discovered after 4 months he was told they could only refund 2 of them. Short story is we got them all refunded -like any company there are good and bad employees in banks

Year ends - fees start again, no warning. Yes he might have finished Uni or dropped out - but where is the communication?

Package fees - CBA is just short of $400 a year. Of course that is a significant saving if you have a rewards credit card, a couple of savings accounts and a mortgage (which you get a discount on through the package) - but that’s the point, if all the accounts didn’t have fees then you wouldn’t be paying $400 to consolidate and save, and the cheaper mortgage rate is not necessarily the cheapest around from the sense I get. Feels like a shell game. Probably is.

The cracker is funds transfer rejection fees - and winners of the ultimate retard competition are CUSCAL (which allegedly is an acronym for “Credit Union Services Corporation (Australia) Limited”). Keying in the correct BSB and account number is not enough for these giants of logic - you also need to put an acceptable form of the destination account holders account name or they will bounce the transaction ‘for security reasons’ … so having tried a couple of times to send money, double checking the numbers and getting the error “no account or incorrect account number” I finally discover it has nothing to do with the account number, rather it is because I put “FredsBirthday” instead of “F and M Smith”. Of course my bank hits me with the bounce fee, and CUSCAL maintain a position of unapologetic clowns. I haven’t tested this in the last 12 months, but I’m not hopeful there has been an injection of neurons at CUSCAL.

Another thing on fees - most can be waived, particularly the punitive ones - and when you find someone in your bank who is helpful and still understands customer service, praise them to their management - but not too much, or they’ll be promoted out of reach

Excellent info, thanks. The account return fee sure is a doozy

I’m not hopeful there has been an injection of neurons at CUSCAL.

One of the reasons for lost money in EFTs is incorrectly entering the BSB-Account number. Each EFT I have made has indicated the account name entered is essentially irrelevant to the receiving institution. I always thought it was entered in case I got something wrong and it was evidence of my intentions after the fact if the money went into a valid but incorrect account.

CUSCAL checking the name should be to their credit (no pun) but searching for APCA network level transmission codes, I was only able to find some from the US ACH via the IRS(!), and there is no code for wrong account name, but there are numerous codes for invalid account numbers. CUSCAL might have a neuron that is held captive to their possibly uniquely rigorous check but without having an equivalent error code to send back, so they have to use the closest available. Maybe, maybe not, but.

CBA’s fee, well… from all reports of the new CEO the board are happy as they are, business as usual.

One of the reasons for lost money in EFTs is incorrectly entering the BSB-Account number.

I’d have thought they would be mod’d somehow? I remember mod-11’ing product numbers back in the 80’s - not impossible to fat finger a wrong number, but very unlikely - combine that with BSB? if there is no check(sum) of any kind, then the problem would be significant.

I’m not against organisations trying to improve on systems in a planned, documented and advertised way (maybe even conforming to the standard, but that might be asking a bit much), but when I got to the bottom of it, CUSCAL (or their specific credit union I was dealing with) were indifferent and utterly unapologetic that this ‘unknown to anyone outside themselves’ security feature they had implemented had cost me a number of failed transactions - CBA were certainly none the wiser and kept telling I had the numbers wrong, because that’s what the error code was telling them … on the face of it, CBA were unwilling to refund a reject fee, even though I had proof the reject was improperly triggered by the receiving party - ‘my issue was with the receiving institution’ according to CBA - until I spoke to my friendly banker - and she ‘just sorted it’. 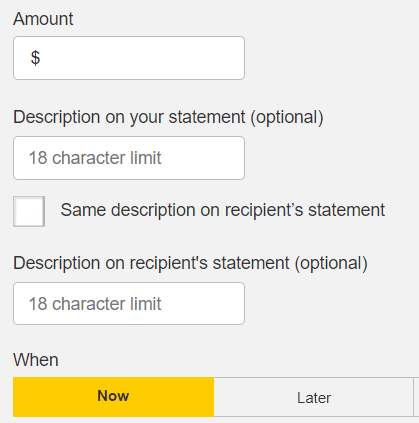 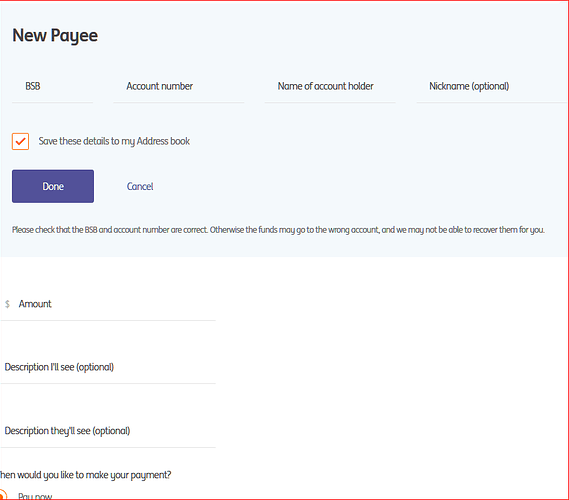 I see something rather similar to this: 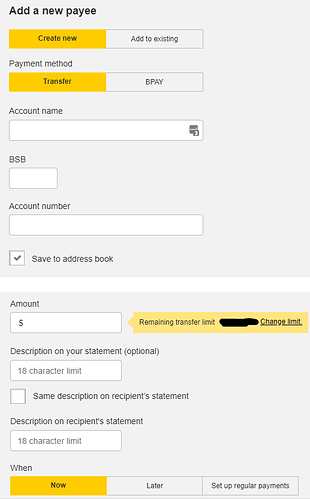 In the case of the transfer that repeatedly bounced, when I created the ‘new payee’ I put their name in the “Account Name” field, from day 1. According to CBA the field is 20 characters long and can be letters, numbers, spaces, hyphens and apostrophes - ie more generous than the limited charset permitted across transfers.

Use to have an account with the Com Bank wanted to close it as I wasn’t using it, had over $700 and was hit with monthly charges went in to close it. It was closed ok by the person attending me but I was charged $10 to get my money out. That I call robbery.

You should consider donating some functional neurons!

Is that the discounted rate for staff in 'offshore/bestshore/rightshore/areushore? You’d think they could reduce fees by culling some of the excess staff? or perhaps redeploying them?

(whatever that means as I never go into the bank)

You should consider donating some functional neurons!

@bigalan7 It feels like the want to make sure the door hits you on the way out. The crazy part is the same company will then spend millions in advertising acquiring customers! I hope you found a better account at least.

Thanks for the detail @maxim. We’re researching for a possible article on the topic, so all the comments help. All the fees are shockers, but the $6 per day overdraft on the ANZ Personal account is just terrible.

Would be interesting but they would have to come during one of the times the bank is not re-renovating their enormous commercial space and definitely don’t come at lunchtime as that’s when the uncounted coins seem to be deposited with the single lone teller.

All the fees are shockers, but the $6 per day overdraft on the ANZ Personal account is just terrible.

$6 per day for honour/overdraft fees.

From memory you don’t only pay the fee for being overdrawn but you also pay quite a high rate of interest on the overdrawn amout. A double whammy.

I have discovered that most banks either just won’t change money or want to charge for the privilege, unless you are one of their customers.

0.95c per repayment by BPAY

In the USA GE Money was known for catering to the ‘subprime’ credit market with onerous charges, high interest rates, inflexible T&C, and poor customer service. There is some anecdotal internet evidence that the Australian arm was little different. That market is apparently quite profitable.

Some cynics might think the name change was to distance themselves from their heritage.

Re paying off loans early, many lenders use the ‘Rule of 78’s’ for early payoff amounts and some add additional fees for their few minutes of effort.