Does a product sample fail if the items measure more by the same margin as they would fail for being less?

Which was why I asked as my lack of caffeine and morning exercise with the chainsaw, 32C heat and humidity called rain left the grey matter deficient. I thought I had read the linked PDF as per your comments and as per @PhilT.

“NewsCorp! should have gone to a reliable source.

A Woolworths customer’s complaint over the amount

I am a bit dubious about the authenticity of this one…

But when she later weighed the meat on her kitchen scales at home, she discovered a big problem – the mince actually weighed just 262g.

It is expected that sny reasonable person would be able to determine a mince pack which is about half of the displayed weight when purchasing. If it was say 5, 10 or 20% under, this might be a different matter. A half filled container compared to other would stand out.

Also the mince pack had been opened prior to weighing. Any chain of custody of the mince pack is therefore indeterminable as there is opportunity for mince to go missing. I am not saying that mince has gone missing, but it would be hard to prove otherwise…the mince should have been weighed in the original unsealed packaging…and then the empty packaging weighed separately.

I have seen at our own local Woollies supermarket customers taking advantage of the fresh food guarantees. (the mickey?). A recent example was a customer returning a bruised banana requesting a full refund for the bunch (even though only one returned) due to a bruise. The banana did look a little old compared to the under ripe ones often sold, Didn’t wait to see the outcome as the manager was called for advice and had to leave).

Reports like this will always be a ‘he said she said’ once the sealed package is opened, but this would not be the first report of packaging failures on the internet.

More interesting than the claimed underweight was learning about the magical ‘e’ and AQS system.

A week ago when I got home from Woolies I only then realised everything that got weighed at the register weighed and was charged at 320g over actual weight. There had to be something on the scale since that was constant. The manager could not be bothered checking that register’s scale since I was the only complaint. That is not quite the same, but when many of us go shopping we just shop and not pay that much attention to what is happening in our trolleys until we do pay attention. It could happen as she claims.

I wasn’t aware of this either. I wonder if the news story was to highlight the ‘e’, whether or not the story could be substantiated.

and was charged at 320g over actual weight.

Looks like the tare was out or not reset to zero…or something pushing down on the scales when weighing.

or something pushing down on the scales when weighing.

Like the many articles regarding the butchers of old who were claimed to “accidently” leave a fingertip on the scales when weighing the customer’s meat?

Obviously not any fingers that they had previously “accidently” lost in work related insurance claims but in either case, they were obviously “giving them the finger”.

"The manager could not be bothered checking that register’s scale…

I wouldn’t have accepted that/taken it lying down!! That is appalling customer service/care by the staff member, plus being ripped off by paying close to 1/3rd more for your purchases. This is definitely (IMO) worth kicking up to senior management; concurrently posting it to social media eg FB - this seems to be the quickest way to get a useful response!

I wouldn’t have accepted that/taken it lying down!!

I have more ‘interaction’ with those managers than most customers over a variety of issues and did not want to push buttons that would make our relationship more stressful. I received a full refund for all the ‘over weighed’ items without a hassle, probably because of the consistency in the error whereby one could not easily ‘make it up’ and that I am a known shopper.

The ‘inaction button’ was that I was the only complaint received according to them, so unless there was another on balance of probabilities it was a once off so no worries. If they had a second complaint they would be checking. In honesty I don’t know if they did check it after leaving me.

We buy packaged meat from the supermarket and then break it up into meal-sized chunks before freezing. So the mince, chicken thighs etc are all weighed out into portions. This provides the opportunity to check the total net weight of each pack. The result according to our kitchen scales, which are not laboratory quality, is quite accurate and precise in matching the labels. {In this context two different things}.

The mince is pre-packed in some central butchery, the thighs are weighed out in the shop. This suggests to me there are not big errors in either method of weighing for this vendor (regional Woolies).

I may have been too kind with Woolies. It could be a me too syndrome but it reflects an appalling laxity at the best of times, and ‘not good’ at the other times. 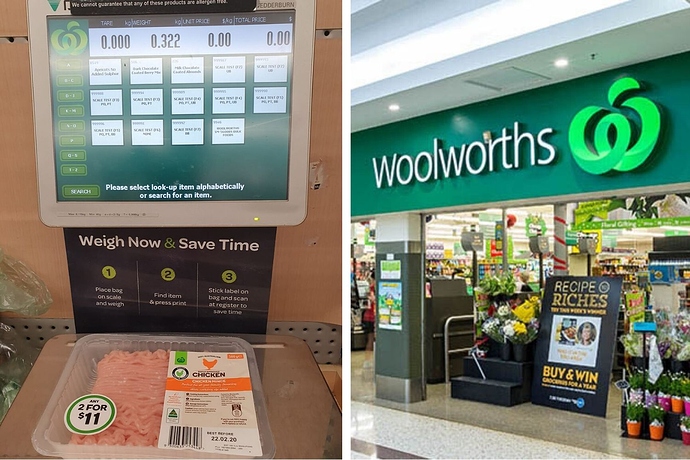 Have members noticed the E that has suddenly appeared on labels of packaged minced steak etc in Supermarkets. It actually means that the product is only an estimate of the weight on the label. Knowing about this I took the time to actually ‘weigh’ by judgement (holding two of the larger packages one in each hand and selecting the heavier) prior to selecting one. When I got home I weighed the entire package, including the packaging. I was told by the label that it was 500gms, however on weighing the entire package it only just reached 300gms!
So consumers, be alert! I’ve complained to Coles where I bought the mince, and will continue to do so. Be aware consumers we’re being ripped off yet again!

Well done picking that up @jezemeg8

May I suggest that you take a few of these prepackaged minces to the fruit & veg area in your Coles store and weigh them there just to check if 1) your scales are right & 2) to see if it is a systematic issue.

> Choice wrote about breaching weight measurements back in 2016.

Both Choice and Dept of Industry state that if you’re concerned about short measures or incorrect measurement labels: contact the National Trade Measurement Hotline on
telephone 1300 686 664 or
email infotm@measurement.gov.au.

Thank you Meltam, I’ve already done everything you suggest… I now take all packages of meat to fruit and veges and weigh them there before buying them, taking those packages that are significantly less than the amount stated on the label to the service desk, where they are weighed and confirmed to be ‘on the light side’. I don’t know what happens to them after I leave the store, they could well be returned to the shelves.
I’ve also reported my experience to ACCC, Coles itself, CHOICE and National Trade measurement hotline. As to my scales being accurate, they are thank you, I spent a lot of money getting scales that are accurate. If I can afford scales why can’t our supermarkets?

Well done @jezemeg8. Sounds like you have this issue completely under control.

I don’t believe the e symbol means the weight is estimated. What it is supposed to indicate is that average weight or quantity (ml for example) of the packages matches the nominal weight (net weight), that no more than a certain number of the packages can below the net weight by a Tolerable Negative Error (TNE), and that no packages can be below the net weight by twice the TNE. Typically the percentage or packages below the TNE permitted is no more than 2.5%. The actual TN\E varies depending on the weight or volume, but for 500g to 1000g it is usually 15 grams. The e symbol is also supposed to indicate that the packer complies with the rules and has systems and checks in place to prove it. It is really only of significance in the EU but you will see it on products here. If there is an E (upper case) symbol then my apologies as I’m not familiar with that. In any case if you can tell a package is low by holding it, and Coles is also saying it is low, then something is seriously wrong with whatever system is packaging the product in my opinion.

Being a price based on $/kg and not per unit/container, the supermarkets could get themselves into grief as the item price doesn’t refect the unit price on display…but based on a unit/container price.

Hopefully the supermarkets change the price to reflect the weight of the contents…so that one can made a purchase decision based on the weight…and then corresponding price.

Refer to the AQS system, referenced in this post, a few before it, and some after it, including salient links to the sources of information.

Indeed - new to me! Interesting they can advertise price per kilogram without an accurate weight … while they may get away with the ‘e’, to state a price per kilogram with the admission it may not be accurate (for some weight ranges the tolerance is nearly 10%?) seems potentially misleading - should there not be a caveat next to the unit pricing? [image] This applies to a lot more than just meat … seemingly half the store

I am aware of these and the three rules used by inspectors to test compliance, namely…

Testing for compliance with the AQS involves testing
against the three AQS rules:

For a 500gm packet, the maximum acceptable to meet the AQS rules is 470gm, with the maximum numhernof packages being between 470gm and 500gm being 6% (maximum of 3 in 50 sample size).

The examples shown above indicate that these rules are not been met and would be in non-compliance with the rules.

As the weights of the packaging is below 470gm, the pricing should be based on the contents weight and not the packet persay…which is currently the case.

mark 3, no matter what the symbol means, when I buy a package of mince supposedly weighing 500gms I don’t expect it to only weigh 300gms INCLUDING PACKAGING!

Should also say prepackaged meat comes direct from the supermarket supplier and the supermarkets may not be aware of the problem/under-weighing by the supplier. Supermarket butchers no longer exist in the true sense.

One can also contact the National Measurement Institute helpline to report a suspected breach of the trade measurements. The contact details are:

I absolutely agree with you. Sorry if you thought otherwise.